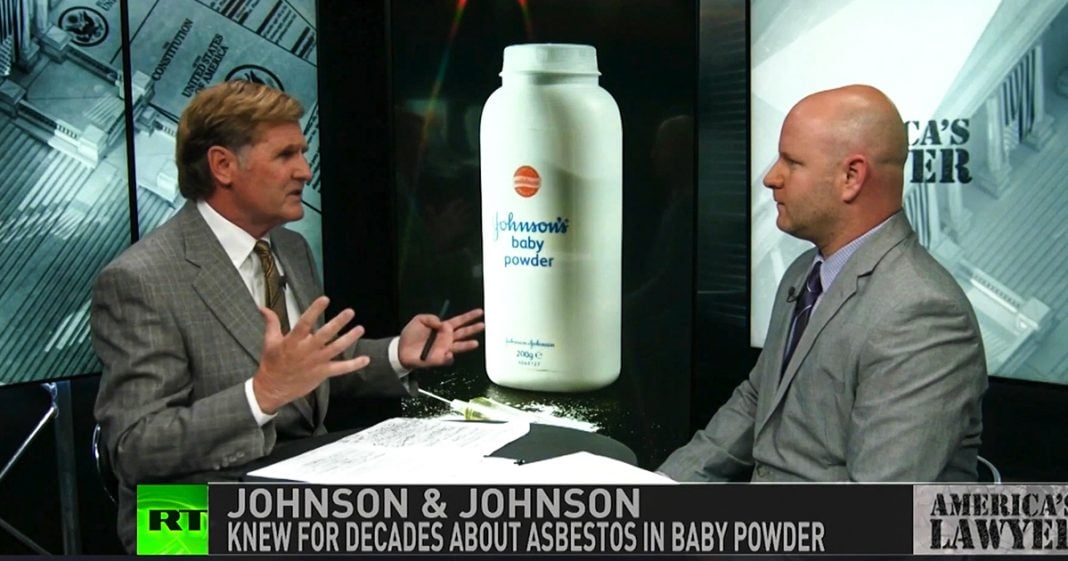 Via America’s Lawyer: For more than 30 years, Johnson & Johnson knew that their talcum powder contained asbestos fibers, but they never once warned consumers about the dangers. Mike Papantonio and Farron Cousins discuss. Then, Mike Papantonio is joined Thom Hartmann to discuss whether PG&E, California’s largest private utility company, should play by different rules after being accused of killing people amid wildfires because of negligence and a desire to jack up corporate profits.

Farron Cousins:                                     You know this, this big report that came out from Reuters, they got their hands on all the court documents that for the longest time the public hadn’t seen. So what they’re telling us here is that one, obviously Johnson & Johnson knew this existed, but what’s really interesting to me is the evolution of Johnson & Johnson’s defensive of this. First it was the outright denial, you know, they said, tremolite, well, it’s a mild form of asbestos. It’s not even really asbestos so don’t worry about that. And then it was, okay, yes, some of our talcum has asbestos, but don’t worry. The only stuff that has the asbestos is what we’re using in the industrial plants. This isn’t stuff we put in the baby powder.

Their own scientists said, we have a problem that was in the 1970’s and in the 1950’s we have a problem and here’s the problem. The fiber tremolite not only causes asbestos disease, whether it’s cancer, Mesothelioma, it also migrates through the body. Look, thanks for joining me. These stories again, every week we try to do the stories that are, that corporate media doesn’t cover. Fortunately, they’re kind of looking at this Johnson & Johnson story because for years they ignored it because they’re advertised or Johnson & Johnson wouldn’t let him tell the story.

Mike Papantonio:             Californians had been wondering who killed 86 of their citizens in what’s called the Campfire, along with dozens of other Californians over the years in other fires. Both federal and state prosecutors are focusing on a likely suspect, Pacific Gas and Electric. But should the corporation have to play by the same rules that everybody else plays with? Joining us to talk about this is Thom Hartmann. Thom, I’m wondering, tell us about the significance of the corporate death penalty. What’s the history? So people understand there really is a corporate death penalty that’s been around and we have ignored it. We, we’ve just, we simply haven’t paid attention to it.

Thom Hartmann:               Per death penalty, Pap, there’s also a corporate lifespan. Up until the 1880’s and 1890’s, every state in the union required corporations to automatically dissolve after 20, 30, or 40 years depending on the state. And the rationale behind that was that just like an individual or a family should not be allowed to accumulate massive amounts of wealth over multiple generations simply because they’re there, you know, they should be subject to taxation. Like for example, the estate tax. Similarly, a corporation should not be a vessel that can be used to accumulate massive wealth and political power over decades and centuries. That every 20, 30, 40 years the corporation should shut down, distributed it’s assets and somebody else should pick up and, and this promoted competition and it also prevented the accumulation of political and capital money.

On top of that, every state up until the 1890’s had laws that said that if the corporation acts in a way that’s contrary to the public interest, if they kill people, if they, if they accept bribes, if they try to make bribes to politicians, this is what, these are the more common areas of, of corporate law that they, that this was involved with, that, that corporation itself could get the, the, what we refer to today as the corporate death penalty. Which means that the secretary of state of the individual states, all corporations are chartered at the state level. There are some federal corporations like Amtrak, but it’s a weird hybrid thing. So the individual states would simply shut down the corporation. They would do what’s called a, removing the charter or closing the charter or denying the charter. The charter is the, the charter of operation, the legal authority to operate as a corporation.

Mike Papantonio:             You know, Thom it’s amazing. We’re willing to put human beings to death when they commit crimes. Here we have companies that kill people by the hundreds sometimes. As you know, the very cases I handle are pharmaceutical companies that understand they’re killing human beings. They do in any way. Chemical companies that are destroying entire ecosystems and in the process killing people by the hundreds and we know who’s responsible. You understand? We know management in that corporation. We know who made the decision. We know exactly how we could prosecute them, but more importantly we know that we should close the corporation down. A, because there are other people that can pick up, pick that up. It’s not like they’re the only game in town, but I think what’s happened so far is the lobby is so strong that it’s so, the corporation wants to be treated as a person. Except we don’t want to throw them in prison and we don’t want anything called the death penalty. Tell us why a company, Thom like PG&E in California perfectly fits the bill as a company that needs the corporate death penalty.

Thom Hartmann:               Well, because they’ve been putting the lives of people at risk. It’s very straightforward and, and you know, whether it’s putting the lives of people at risk or whether it’s engaging in the more, you know, the bribery kind of things. The white collar crime stuff. Up until the 1890’s, it was routine a couple thousand times a year. Corporations, major corporations, significant corporations got shut down by the various states. In the 1880’s, the state of Ohio passed an antitrust act and they, and John Rockefeller was operating out of Ohio at the time. And Standard Oil of Ohio is what it was called. And he, he put together this trust which involve multiple companies in multiple states that Ohio concluded was against the law. It was a violation of the antitrust laws. And so they told him he had to leave town.

So in the, in the late 1880’s, early 1890’s, Rockefeller reached out to all the other states. They all had similar laws to Ohio and said who’s going to amend their laws so that my corporation can continue to break the law, but it won’t be breaking the law anymore because you’ve changed the law and, and Standard Oil can continue to exist as a trust. And New Jersey and Delaware got in this fight essentially over about a 10 year period where each one would lower their standards a little bit and then the next one would lower even more trying to get Rockefeller’s business. He ended up in New Jersey, but Delaware ended up with the lowest corporate standards in the country, which is why more than half of all their corporations, on the, on the New York Stock Exchange are chartered as Delaware corporations. So when you’ve got corporations that are committing crimes like this, that are killing people, that are bribing politicians and things like this, up until the 1880’s, it was absolutely routine for them to be shut down and they should be shut down.

Now it’s almost impossible and in large part, because of that seminal moment that it’s referred to as the charter mongering era of the late 1890’s were Rockefeller, and it wasn’t just Rockefeller. It was Carnegie. It was steel. It was the sugar trust. It was the tin trust. It was the, the tobacco trust. A bunch of these industries essentially that had become monopolized, just, you know, took over the states and changed the rules. So now while every state in the union still has the power to declare a corporation dead, or kill a corporation to end a corporation, it’s virtually never done. Instead they, well what’s happening with California as it looks in all probability that PG&E is simply going to declare bankruptcy and then reincarnate, reinvent themselves. The state has the power to shut them down, but I’d be very surprised if they use it. Unfortunate.

Mike Papantonio:             Thom, thanks for joining us. I don’t know that this much is going to change. We give this, this special privilege to these corporations. I don’t see it changing much, but it keeps us in the courtroom and it keeps us pushing back everyday. Thank you for joining me.