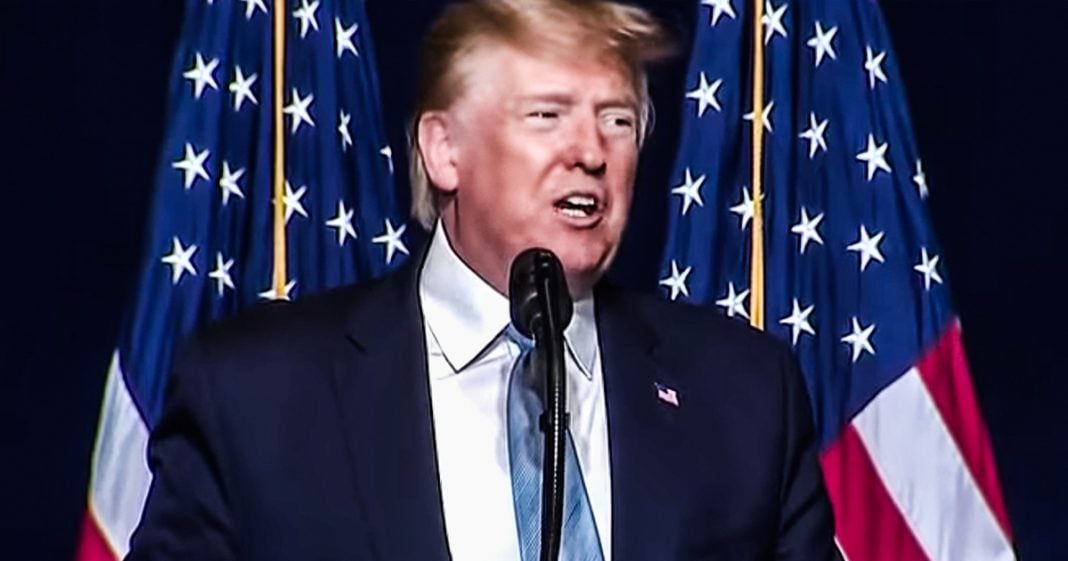 Donald Trump proudly proclaimed on Twitter over the weekend that his social media posts now count as official “legal notices” to Congress about his intentions to destroy Iran. Unfortunately for the President, that’s not how this works. Congress and Congress alone has the power to declare war, and the President can’t tweet his way into World War 3. Ring of Fire’s Farron Cousins discusses this.

On Sunday, Donald Trump drunk with power, tweeted out the following, you may call it a warning, but to use the president’s word, legal notice, to members of Congress. Here it is. These media posts will serve as notification to the United States Congress that should Iran strike any US person or target, the United States will quickly and fully strike back and perhaps in a disproportionate manner. Such legal notice is not required, but is given, nevertheless. What a good guy, right? I mean, he even says it in the tweet like, I don’t have to do this, but I’m going to do it anyway. I’m just letting you know that if Iran attacks the US or any US site around the world, we’re going to go fricking crazy on them, disproportionately, and I’m just letting you know because I’m a nice guy. I don’t have to tell you this, but I’m going to tell you this. The president of the United States is drunk with power right now, power that he had not yet experienced in his administration and he loves it. He loves this power and he’ll never let go of it.

But let’s analyze the tweet a little bit more. Okay. First and foremost, yeah, he’s correct. He does not legally have to let Congress know that he’s going to do any of this, right? Because as the commander in chief of the United States, as the executive power in the United States, he does have the authority to, you know, launch these bombing campaigns. However, if Congress has not declared war against Iran or any specific group, really does kind of limit what he is able to do here and gives Congress a lot of authority to reign in his power, which is what Congress is supposed to be working on today. Different resolutions, different members of Congress all coming out and saying, we’re going to draft a, you know, a new resolution limiting Donald Trump’s war powers. Ro Khanna and Bernie Sanders in the Senate, Khanna in the House, have come together and said, listen, we’re going to pass a bill that’s going to prevent any funding of Donald Trump’s actions against Iran. So we have lots of different people doing lots of different good things to try to limit the president’s power.

But, especially when it comes to the Senate, that’s not going to pass. Republicans like war, especially all these Republicans who see the polls out there showing that the public hates Donald Trump, that he’s facing a very tough road for reelection, and that these same Republicans, including people like Lindsey Graham and Mitch McConnell who’ve been in the Senate for 30 years or more. They may not win their elections, so a good war would probably help them. So as great as it is that we have these Democrats out there doing good things to try to curtail Donald Trump’s power, it’s not going to happen. But what is going to happen as Donald Trump told us, if Iran strikes us, which is very likely, we’re going to go nuts. We’re going to go disproportionately nuts. We’re going to attack 52 different sites in there, including some that’ll get Donald Trump accused of war crimes.

He told us a day before, he sent out this ridiculous tweet. War’s coming. I don’t think there’s any other way to say that. I don’t think it’s worthwhile even to sugarcoat it. War is coming, or at least what Donald Trump thinks is war, because Congress is never going to grant him the authority to officially call it a war. At least I would hope not. Then again, some of those corporate Democrats in Congress, there’s no telling what these people would or would not vote for in a war powers resolution. But as it stands right now, they appear to be fairly United in telling Donald Trump that, hey, your tweets cool and all, but we can still limit your power if we feel that it’s necessary, and right now they absolutely feel that it’s necessary.