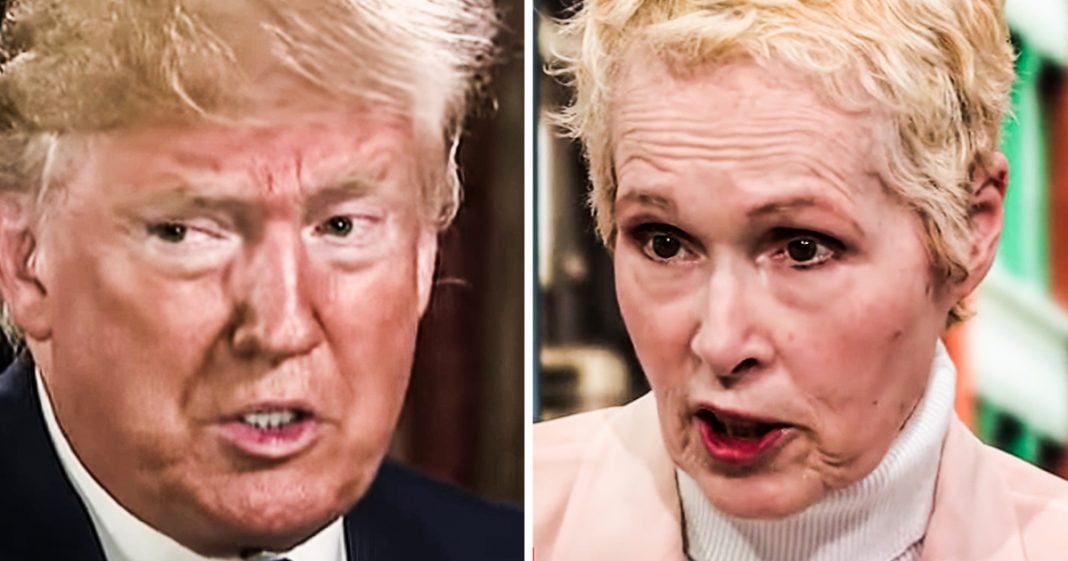 Last week, Donald Trump’s lawyers tried to argue in court that the charges leveled against him by columnist E. Jean Carroll should be dismissed, saying that the courts in New York did not have jurisdiction over the matter. This case is not about the assault itself, but about the President’s attack on Carroll after she came forward. Ring of Fire’s Farron Cousins explains what’s happening.

Donald Trump and his team of lawyers have asked a judge in New York to throw out a lawsuit brought by columnist, E. Jean Carroll, the woman who claims that Donald Trump a couple of decades ago saw her in a department store and then sexually assaulted her in that same department store, in the dressing room. Donald Trump and his lawyers are arguing that this case needs to be thrown out. And the reason they’re saying that this case needs to be thrown out is because you can’t sue us, they say, in New York. Now here’s the thing people need to understand about this lawsuit. This lawsuit is not about the assault itself, right? This lawsuit is a defamation lawsuit that Carroll brought against Donald Trump after she came forward with her story of how he allegedly assaulted her. An assault, that by the way, she had told other people about at the time. Some advised her to go forward with it, some advised her not to.

They said, hey, you’re in New York. This is Donald Trump. They’re not going to do anything to the guy. And that is the advice she took and unfortunately that advice was probably correct. Trump was a powerful, wealthy guy. Nobody was going to touch him no matter what he was accused of. But again, mid 2019, I think it was, Carroll came out with her story and Donald Trump immediately came out, started attacking Carroll. Said she’s not my type. Said, oh, she’s just trying to sell a book. She’s making this all up. She is a liar. And so in November, Carroll sued him for defamation. And so last week, Trump’s lawyers go to that court in New York and they say, listen, she can’t sue us here in New York for defamation because Trump said those things when he was in Washington DC. So this is, this is their jurisdiction because he didn’t defame her here in New York.

He defamed her over there in Washington, DC. And that’s not how this works at all. She is, she’s the plaintiff and she’s in New York. So, so that’s, that is actually where you would file that suit. That is a pretty lazy and weak argument from Donald Trump’s lawyers. And it continues to blow my mind that Donald Trump with all of his money, with all of his bragging about always hiring the best people imaginable. Seriously, every time this man gets in trouble, he hires the absolute worst attorneys this country has ever seen. I mean, his favorite attorney of more than 20 years is sitting in prison right now. His other one, Rudy Giuliani is under criminal investigation and these morons that he sent up to New York are trying to make an argument that has absolutely no legal standing whatsoever. But Ms. Carroll’s lawyers actually pointed out the obvious in this.

They said, the reason they’re making this argument, the reason they’re trying to delay this case as long as possible is because they don’t want the discovery process to happen. They don’t want us to start subpoenaing documents and maybe call records and photographs and things like that. They don’t want us to dig into this case because yeah, guess what? It is about more than defamation, and it actually is really about the assault, but due to statutes of limitations, we can’t go after that right now. But what we can do is dig up enough evidence from this defamation case to prove that Ms. Carroll’s claims are 100% accurate.