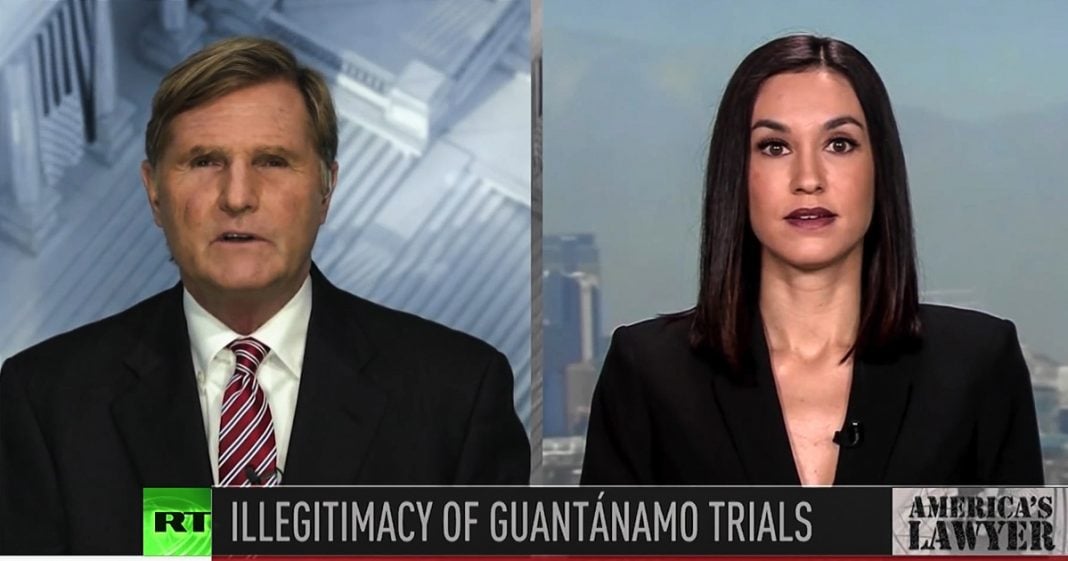 Via America’s Lawyer: A small group of Republicans led by Senator Ted Cruz have introduced legislation that would put term limits on members of Congress. Mike Papantonio and Farron Cousins discuss. Then, Mike Papantonio is joined by RT Correspondent Brigida Santos to discuss the case of a Yemeni citizen who’s been detained at Guantanamo Bay for 17 years without charge, is now petitioning the Supreme Court to review his case.

Mike Papantonio:             A small group of Republicans led by Senator Ted Cruz has introduced legislation that would put term limits on members of Congress. This is a great idea and it should extend to judicial branches as well. That’s really where the problem is, is term limits in the judicial branch. You know, okay, so here you got Ted. Now there’s obviously there’s something behind the story. Ted Cruz and Republicans all of a sudden are up there because they’re looking down the road. They’re saying, well, let’s read tea leaves. We might not want, we might, now’s the time to really enforce term limits, but you know, the truth is this is a good idea. Whether it comes from Ted Cruz, I don’t care where it comes from. It’s a great idea. What’s your take?

Farron Cousins:                  Right, even the blind squirrel finds the nut every now and then, and Ted Cruz, I think, found one here. This is, you know, one of the only times I’ve ever agreed with him on anything but this is desperately needed. You know, term limits for the House of Representatives for the Senate. And again, not included in the bill, but even more important, we’ve got to stop these lifetime appointments for these corrupt judicial hacks that at this point had infiltrated every facet of the, the judicial branch of government from the Supreme Court all the way down to the district courts. We’ve got people on there who have been deemed not qualified by the ABA.

Mike Papantonio:             The arrogance, and you know, I agree with you to certainly in Congress and Senate, you know, you got to have term limits. You just have to. McCain is a great example. I mean, I’ve had, there’s so many great examples, but McCain certainly is one. I, I look at this story and I think of the judiciary where everyday we’re appearing in front of judges, some of them that, not all of them, but there are some that they have what they call the black robe syndrome.

Farron Cousins:                  In Congress, zero percent chance. Unfortunately, these people are not going to vote to limit their own jobs. And so I think part of the motivation for Cruz here is he knows this is hugely popular. I’ll put it forward, let them vote against it. And that’s a plus for me because I sponsored it. I put it out there, they voted against it.

Farron Cousins:                  Right, but if you only did it at the state level, this thing has 80 percent approval rating and has for years because the American public left, right and center, everybody agrees. Some of these folks up there are in there for too long. They’re in either safe states or safe districts. Maybe it’s gerrymandering, maybe it’s just bad politics, but they get to stay there for 20 or 30 years.

Mike Papantonio:             Yeah, and this is simple, Farron. That what they’re saying is you get two, if you’re in Senate two, six year terms. Reasonable, huh?

Farron Cousins:                  But here’s the thing too, when we look at these people that have been in Congress for so long, compare it to a president who is term limited. Mitch McConnell is more powerful than Donald Trump.

Mike Papantonio:             A Yemeni citizen who’s been detained at Guantanamo Bay for 17 years without charges, has petitioned the Supreme Court to review his case. He demands that he be tried or released. RT correspondent Brigida Santos joins me to talk about that. Brigida, first of all, the lower courts have already denied a habeas petition by this, by this particular individual ruling that he can legally be detained under the 2001 authorization for the use of military force. What will his legal team argue that’s different to the Supreme Court?

Brigida Santos:                   Legal documents filed by Al-Alwi’s lawyers argue that the US government doesn’t have the authority to detain him under the 2001 AUMF as claimed because he was captured and delivered by bounty hunters who were sought out by the US government through flyers that were posted in Pakistan, which is where he was caught. These flyers offered thousands of dollars in exchange for “suspicious people.” Financial opportunists saw these flyers and then they apprehended and delivered 369 people to the US government, including Al-Alwi. The main characteristic that made these captured people suspicious was there Arab ethnicity, because again, this was Pakistan.

Since his capture, he has been imprisoned indefinitely at Guantanamo Gay where he hasn’t been charged or sentenced despite the fact that the lower courts have not found any evidence that he ever used arms against the US or it’s coalition partners or any evidence that he had anything to do with the attacks on September 11th. So his lawyer say it’s time for the Supreme Court to impose term limits on perpetual military detention and to see whether the government’s authority to detain him under the 2001 AUMF has unraveled.

Mike Papantonio:             Yeah, since the 2002, when Guantanamo prison first opened, more than 700 inmates have been held there. How many have been released? You want to see, because we know the story behind this. We know that a lot of the inmates that were there were put there because, you know, when the US went in, there were people that had personal family feuds and they would say this particular person is a terrorist or that person’s a terrorist, and they actually discovered that there were literally hundreds of people in prison like that, and they’ve worked, they supposedly worked through all that. How many have been released at this point?

Brigida Santos:                   So as you said most people have been released, all but 40 actually have been transferred or let go, and at least 26 of those who are still in custody, however, are considered forever prisoners. These are detainees who can’t be tried because the evidence against them is inadmissible or unreliable because it was extracted through torture. Al-Alwi’s lawyers say that the main evidence against their client also comes from unreliable interrogation reports.

Mike Papantonio:             What has the US government’s, how have they justified this indefinite detention of people? When they come back and you know, they have to answer that. The attorney general’s got to say, well, we’re doing this because. And we’ve all, we’ve all heard the argument is that there are different standards that we can use outside the country. There are different standards that were put in place after 9/11 and we get all that, you know, there’s certainly is enemy combatant kind of standard that falls into this. But what is, what are they saying now, you know, in 2019 about why we can indefinitely detain people in Guantanamo?

Brigida Santos:                   Not much has changed. It still has to do with national security. The government argues that detainees who were held indefinitely are simply too dangerous to be released and that the 2001 AUMF gives the President the power over any war on terror policies, including those involving indefinite detention and keeping Guantanamo Bay operational.

Mike Papantonio:             You know, the US government imposes restrictions, Brigida on defense lawyers and those restrictions make it extremely hard for those lawyers to investigate and interview potential witnesses. As a matter of fact, there’s reports where, you know, there’s eavesdropping in on the conversation between the lawyer and the detainee which should not take place. There is abuse, I mean outward abuse of the lawyers that show up to represent these people. What can you tell us about these restrictions? We heard that, oh yeah, we caught ourselves doing that. This is, this was Rumsfeld, this was his fault. He told us we could do what we want. What have they done about those restrictions though over the last few years, if anything?

Brigida Santos:                   Well there are many restrictions, but when it comes to defense lawyers, the US government bars them from interviewing CIA agents who know about how their client was treated while in CIA custody. Defense attorneys with top secret security clearance are also subject to a gag order that prohibits them from sharing information about CIA torture with their own clients or with the general public because that information is still classified. Now, if defense attorney’s tried to interview CIA agents anyway, they can be threatened with criminal charges and that is something that has happened. This is just another way our government works to keep the details about the CIA’s torture program secret. To this day, only 528 pages of those 6,000 have been declassified from the 2014 senate intelligence report on torture.