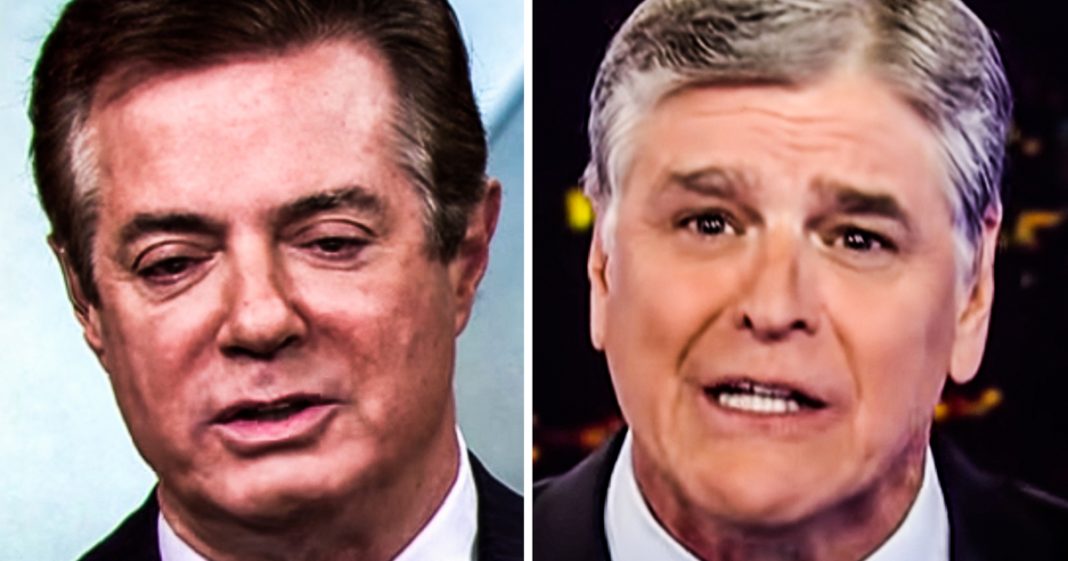 According to text messages and records recently obtained, Paul Manafort was using Fox News host Sean Hannity as a backchannel to Trump while Manafort was being investigated. Hannity assured Manafort that he and Trump were good friends, and that Hannity was speaking to Trump routinely on Manafort’s behalf. This is just further proof that Trump was attempting to keep Manafort from turning on him. Ring of Fire’s Farron Cousins discusses this.

Earlier this week, a treasure trove of documents from the Mueller investigation was released by Buzzfeed, a team led by investigative journalist, Jason Leopold, released these documents. And one of the interesting parts in here, or at least one of the things I found to be the most interesting was the fact that Paul Manafort, who is currently spending the next seven years in prison during, the investigation into Manafort, which began in late 2016, he was using Sean Hannity as a back channel to Donald Trump. Now obviously considering the fact that Manafort was so close to Donald Trump, worked on the campaign, was a good friend of his, but now he’s under criminal investigation. He can’t exactly just call up Trump on the phone and say, hey, what can you do to help me out? So Manafort used Fox news host Sean Hannity to do that for him. And we know that because these documents that have been released this week contained the text messages, which most of them had already been made public.

They include the testimony where Manafort himself said, yes, I used Sean Hannity as my back channel. And here is what Manafort was told by Sean Hannity during that time. Sean Hannity told him, don’t worry, don’t worry. The president has your back. The president has your back. Now to me that seems like the kind of statement that somebody would make when they know that you have dirt on them and you’re going to be talking to prosecutors and they don’t want you to spill that dirt. That’s what this sounds like. Not just witness tampering, but obstruction of justice. You play ball with us, Mr. Manafort, and I’ll make sure Trump has your back. He said he has your back. I’m talking to him every day and we’re going to take care of you when all this is over. You have nothing to worry about. Hannity even went as far as to say, listen, I’m not a fair weather friend.

I’m there for you no matter what, thick and thin. So Sean Hannity’s involved in this obstruction of justice. Donald Trump is involved in this obstruction of justice and we have documented accounts of this, not just Manafort’s word that this happened, but the actual text messages and call logs. This is indisputable at this point. We have a Fox news host obstructing justice by communicating directly with the president and the man being investigated and then arrested and then sentenced to seven years in prison. Every one of these men should be going down. Manafort already has, but is anything going to happen to Hannity or Trump because of this? Probably not because we’ve got a very weak crop of Democrats in charge of the House of representatives who probably aren’t even going to give this story any attention whatsoever.

You could very easily, based on these new Mueller documents from the good folks over at Buzzfeed, launch yet another investigation on obstruction of justice. You could call in Sean Hannity. You could grill him to hell and back and get it on the congressional record. Show the public exactly who Sean Hannity is and what he did because even if you don’t end up with a conviction on that, you’re going to do ever lasting damage to not just Sean Hannity but to Fox news and their entire Republican propaganda machine. And that folks is 100% worth the effort, but unfortunately Democrats aren’t willing to put in that effort. Are they?