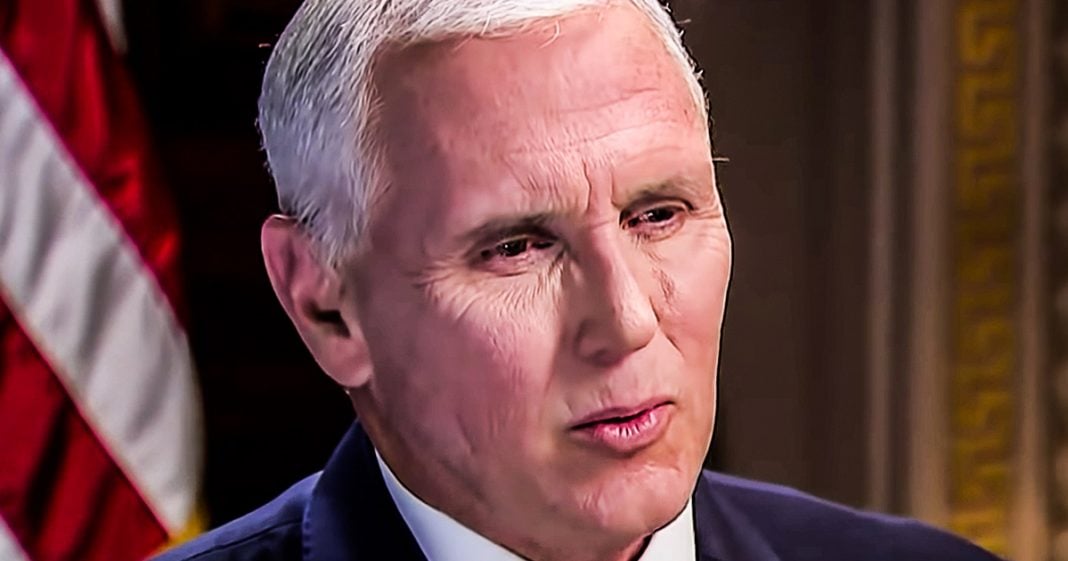 Vice President Mike Pence is trying to drum up support for a war with Iran, and he’s doing it just like the Bush Administration did to gain support for attacking Iraq. Pence claimed late last week that the Qasem Soleimani, the Iranian general that the U.S. assassinated last week, was somehow responsible for the 9/11 attacks on the United States. We have seen this show before, and it doesn’t end well for anyone, as Ring of Fire’s Farron Cousins explains.

So Donald Trump has gotten most of the attention for the attack on Iran and all the crazy things that Donald Trump has said after that attack. His, his threat to commit war crimes. His little weird tweet saying this is the official legal notice to Congress that I’m going to do horrible things. But we’re overlooking Mike Pence, right? Vice president Mike Pence is also playing a very significant role in this and Mike Pence’s role is to go out there and sell this new armed conflict to the American public. And last Friday, Mike Pence in little speech said that the Iranian general, Qassem Suleimani, the, the man we assassinated last week, Mike Pence actually lied to the crowd and told them that this guy Suleimani was somehow involved with 9/11. Going back to those old Bush year lies, right? Oh, Saddam Hussein did 9/11. That’s why we got to attack Iraq instead of going after that Bin Laden fella, right? Iraq did 9/11 and unfortunately a large percentage of the US population actually bought into that lie.

Even though we were warned repeatedly, hey, that’s not true. There’s nothing to back this up. We know who the hijackers were, 15 of them from Saudi Arabia, none of them from Iraq. And guess what? None of them from Iran either. Mike Pence’s claim that Suleimani was somehow involved in 9/11, allegedly helping some of the hijackers, you know, get out of his country or whatever and, you know, providing material assistance to them. There’s literally no proof of this. And in fact, all of the governmental and intelligence reports that came out after the fact with Iraq about 9/11, they said that, yeah, there was absolutely no Iranian involvement in it whatsoever, nor was there any involvement from Hezbollah. But, Mike Pence has to be a good little lapdog right now. He has to be a good salesman. And what better way to get the public on your side than to have invoke 9/11?

It’s still something a lot of people in this country remember very vividly. We were there or we watched it on TV. We were angry, we were sad, we were depressed. And Mike Pence is trying to tap back into that by straight up lying to us about this man that the United States assassinated last week, saying that he, this guy who nobody had really even heard of until he was murdered by the United States, he was somehow the true mastermind behind the 9/11 attacks here in the United States. That is quite a lie, but it just shows you that Mike Pence, let’s, you know what, let’s, let’s, let’s fantasize for a moment. Let’s assume Republicans in the Senate are fed up with Donald Trump and they say, you know what? Let’s have this impeachment trial and let’s vote this crazy guy out. Then we get Mike Pence as president, right? Well, it turns out Pence may be just as crazy as Donald Trump, at least in terms of foreign policy, because Mike Pence is out there trying to sell this war to the American public with one of the absolute worst lies that we have ever, ever heard from this administration.