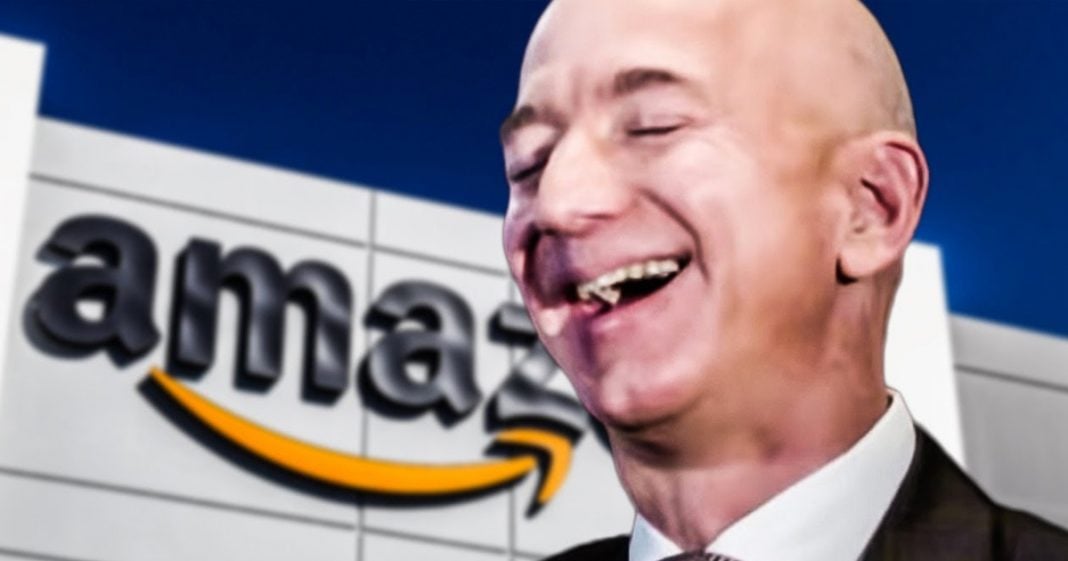 According to internal company emails, Amazon threatened several employees with their termination if they ever criticized the companies environmental policies publicly again. Amazon claims that all employees have to sign agreements that they won’t engage in this kind of criticism, but the truth is that these agreements are just to protect Amazon’s public image. Ring of Fire’s Farron Cousins explains what’s happening.

Many months ago, several employees working for Amazon gave an interview to the Washington Post where they criticized Amazon’s environmental policies, specifically the fact that Amazon partners with companies who exploit fossil fuels and further the destruction of our planet. These employees weren’t happy about that and they said, gee, I wish Amazon wouldn’t do this. Not long after the Washington Post printed this story, these employees were called into human resources at Amazon and each one individually, one by one, was threatened with termination from the company if they ever stepped out of line and criticized this company or their environmental policies in the press ever again. And we know that that happened because the Washington Post, which is owned by Jeff Bezos, who owns Amazon, actually got their hands on those Amazon emails calling these employees in and warning them, one, that they allegedly broke company rules and two, that if you ever do it again, you’re going to be fired.

Here’s the issue with all of this. Amazon came out and said, well, listen, actually, here it is. Representatives for Amazon said that the company’s external communications policy was well established and that employees had internal means to share their concerns. Our policy regarding external communications is not new and we believe is similar to other large companies, a company spokesperson said. We recently updated the policy and related approval process to make it easier for employees to participate in external activities such as speeches, media interviews and use of the company’s logo. As with any company policy, employees may receive a notification from our HR team if we learn of an instance where a policy is not being followed. These people were criticizing the company. They didn’t say you were evil, they didn’t say you were the worst company on the planet. They weren’t out there exposing the fact that your warehouse workers have to pee in jars. They were just saying, gee, I wish we weren’t partnering with the companies who are destroying the planet.

And they’re threatened with termination. And again, these are not warehouse employees. These are some of the higher ups in Amazon speaking to a newspaper that Amazon owns. Now, this story is absolutely nuts, but it’s not just about Amazon here. As they pointed out, lots of companies have this same policy. You can’t go out there and talk bad about us in the public and that’s such a horrible way to do business. And I understand why companies like Amazon and all the rest of them do this, they want to save face. They don’t want their employees out there telling all their dirty little secrets to the press. If they did, those are the only stories that would ever be able to run because there’s so many abuses taking place in corporate America. But, these employees have every right to go out there and talk. They have every right to let the public know what’s really happening and if the company doesn’t like it, how about instead of retaliating against the employees, you stop doing the bad things.

I don’t know. I mean, I don’t run a company, but to me that seems like the best way to avoid this negative publicity and press. If you don’t want people going out there and telling all your dirty little secrets, then maybe the best course of action is to not have dirty little secrets. If you don’t want people criticizing you for partnering with fossil fuel companies, then don’t partner with fossil fuel companies. I mean that, that, that seems like a pretty easy solution there. A common sense way to solve these problems, but Amazon’s not going to do that. Amazon would rather fire these employees than have to address the fact that they’re not being forthright with the public about their environmental policies and who they’re partnered with. Why? Because they make more money that way. And at the end of the day, that’s what this all comes down to. You can replace an employee, but you can’t replace a multimillion dollar partnership with a company that’s getting rich, destroying the planet.