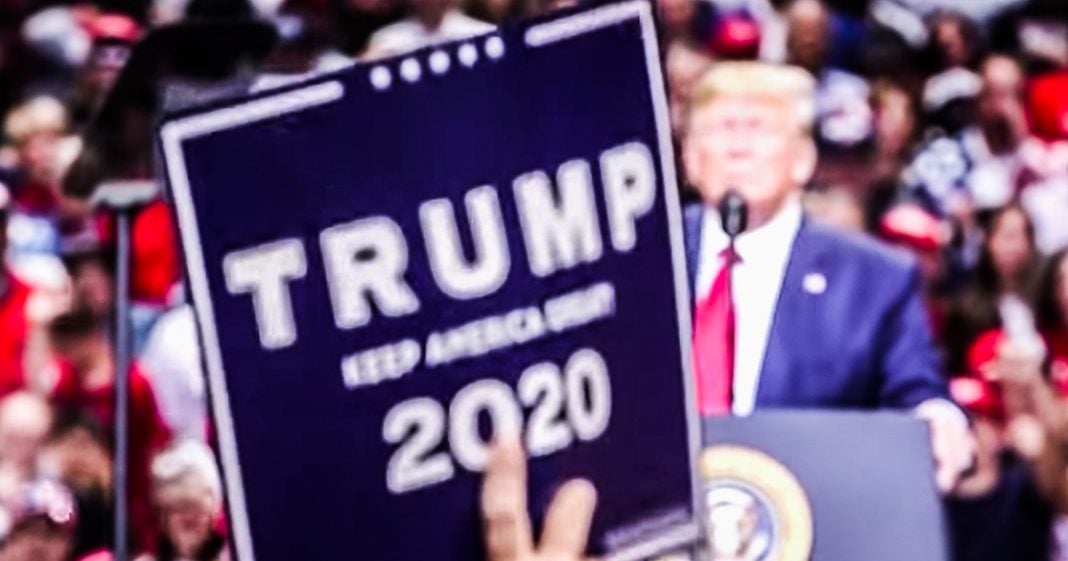 Donald Trump loves to attack his critics as being “low IQ,” but when it comes to his own record of academic achievements, he’s done everything possible, including filing lawsuits, to keep those hidden. Trump supporters believe they now know why – our puny brains simply cannot handle the sheer brilliance of Trump. A new right-wing conspiracy theory claims that Donald Trump has an IQ of at least 156, making him one of the most intelligent human beings on the planet. Ring of Fire’s Farron Cousins explains why this is pure fiction.

*This transcript was generated by a third-party transcription software company, so please excuse any typos.
One of the things Donald Trump supporters love to do is promote conspiracy theories, and one of the latest conspiracy theories being pushed by a QAnon style Trump supporting website is that the president himself has an IQ of 156 which would make him one of the most intelligent human beings alive on planet earth today. The website is called IQ-test.net that’s IQ-test.net and the reason they say that Donald Trump very clearly has an IQ of at least 156 is because he got into the Wharton school of business at the university of Pennsylvania. Boom, that’s it. That’s their evidence. He got into a fancy business school and therefore is one of the smartest human beings on the planet. Now okay, I was going to continue for a moment, but let me go ahead and just point something out here because this is already driving me insane. Trump got into Wharton school of business because his daddy bought him his way in, just like his daddy got the doctor to say that he has bone spurs in his foot, so he didn’t have to go to Vietnam. His daddy pulled every possible string for him to set up his life and make it as easy as possible. Trump did not get into Wharton because he was intelligent. He got into Wharton because his daddy had money, so let’s get that out of the way real quick. The website says, Donald Trump is smarter than 99.99% of people on planet earth. Not only does Trump qualify for membership in Mensa, but he could join the triple nine society. Now, here’s the thing, folks, I am in Mensa. I have an IQ within the top 2% of people on the planet. Am I the smartest person? Nope. Do I say stupid things a lot? Yup. Do I make a lot of mistakes? I sure as hell do, but I have a high IQ and it means exactly nothing. Literally folks, it means nothing. Let’s be honest about that. Trump on the other hand, has hidden all of his records from school. We can’t see his test scores. We can’t see his IQ score. And the few times when people have reached out to colleges to say, hey, could you send us his transcripts? You know what he does? He sues them. This man, Donald Trump is so secretive about his records while in school that he sued the schools to prevent them from releasing them. Now, I would think that if this man had an IQ higher than 99.99% of people on this planet, he would be releasing it every day, every day. Like every morning he’d wake up and say, good morning America. I have an IQ of at least 156 have a great day. Nancy Palosi’s crazy? We would see that tweet every day. But we don’t. And this is a guy who brags about every possible thing and loves to attack his opponents as being low IQ. But the fact is, Donald Trump is not a smart man. And I know there is a world of difference between smarts and intelligence, but Donald Trump is probably smarter than he is intelligent. And what I mean by that is that if you’ve ever taken an IQ test before, you know that they’re not sitting there saying, all right, solve all these math problems. It’s about logic and problem solving, how your brain processes these things. It’s not about general knowledge. Yes, there’s some general knowledge on it. More like trivia questions almost, but that’s what an IQ test is. It’s to see if your brain is capable of making these connections. Finding the differences between the two pictures was a huge part of the IQ test that you have to take. I know, like I said, I took it, I got in Mensa. Trump doesn’t have that. Trump does not have the problem solving skills. Trump is not able to make those connections. We see it in his daily life and I’m not talking about his stumbling over words. I do that all the time too. That’s not an indication that somebody is not intelligent. What I’m saying is that his incoherent thoughts, his rambling train of thought. That is where you can see that this is a man that does not know how to put things together. We see it in his policies with the trade war. The trade war only started because Donald Trump got pissed off at China. And if you can’t control your emotions like that, and you’re willing to tank the US economy to do it, I’m sorry, but that’s not something that an intelligent human being does. So this conspiracy theory, like all the others is exactly that. It’s a conspiracy. And if anyone out there actually thinks that Donald Trump has an IQ that puts him into even Mensa level, then I encourage you yourself to go check into a mental institution because something’s not right with your IQ.