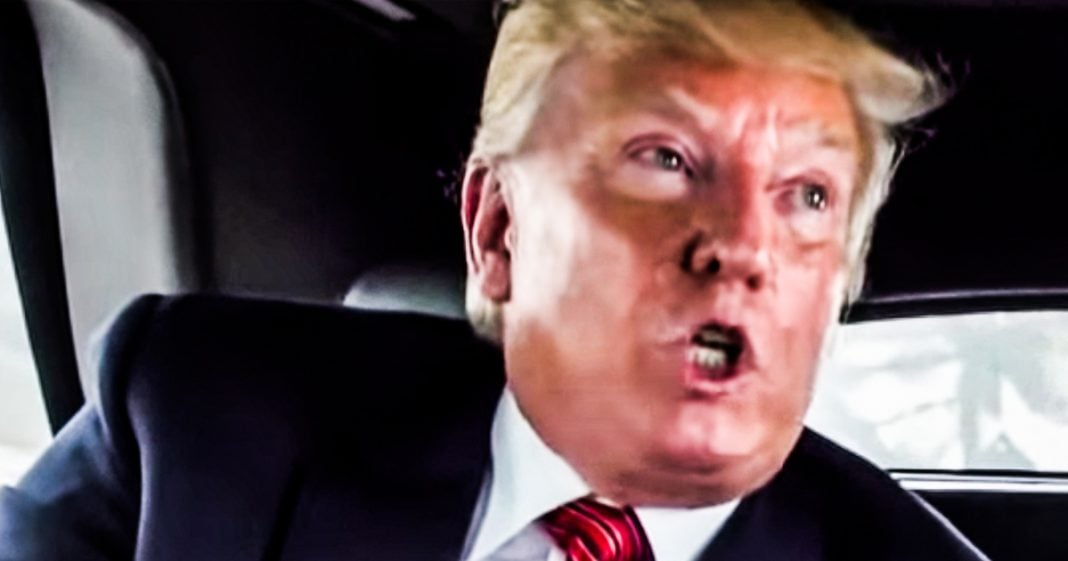 Donald Trump lashed out at the state of New York recently, trying to distract that public from the fact that he is under investigation for bank fraud. The President has frequently used these distraction tactics, but these feel more desperate than usual. Could it be that he recently got some bad news that the public isn’t aware of yet? Ring of Fire’s Farron Cousins discusses this.

*This transcript was generated by a third-party transcription software company, so please excuse any typos.
This past weekend, Donald Trump for some reason had a bit of a meltdown about the States of both California and New York, but he spent a little bit more time particularly hammering New York and in his little Twitter tirade we got a glimpse into why he was going after New York so much. Here’s what he had to say. So sad to see that New York city and state are falling apart. All they want to do is investigate to make me hate them even more than I should. Governor Cuomo has lost control and lost his mind. Very bad for the homeless and all, California and New York must do something about their tremendous homeless problems. They are setting records. If their governors can’t handle the situation, which they should be able to do very easily. They must call and politely ask for help would be so easy with competence. All right. A couple things to unpack from there. First of all, let’s deal with the secondary issue, which is Donald Trump going after these States for homelessness. And sure, got a lot of homeless people. California does have more homeless people than anybody else in the country. They also have more people than anybody else in the country. Um, but here’s the thing, you want to harp on these cities States for having homeless people. Okay, let me get it. Yeah, that’s an issue. How about your harp on a Kentucky where senators Mitch McConnell and Rand Paul are from? They, they have the highest rate of cancer in the country. Their, their air is dirtier, their water is dirtier, their ground is dirtier. What, why aren’t we talking about that? Why aren’t we talking about the fact that Alabama, according to a United nations report, has the worst poverty in the industrialized world? Alabama’s the worst. Now, forgive me if I’m wrong, but what party has ruled the state of Alabama for well over a decade? Pretty sure it’s not the Democrats. So yeah, I mean, there’s plenty of things you can pick at red States for. Hell, they rely more on, uh, the federal government programs that help the needy and the poor more than blue States. They’re the welfare States. But sure, go ahead and harp on New York and California for the homelessness and you’re doing it. One, you’re beating on California because Nancy Pelosi is from there and she’s investigating you and you’re harping on New York because they’re investigating you on multiple different fronts. First and foremost, let’s not forget that just about a month ago, you were ordered to pay millions of dollars for defrauding charities. Your kids were ordered to undergo mandatory training so that they learn how to not defraud charities. On top of the fact that you have two different investigations going on right now in the state of New York, one being a Leticia James looking into whether or not you committed bank fraud by lying about your net worth in order to secure loans, something that would land anybody else in this country that isn’t a member of the top 1% in prison. That is bank fraud and that is illegal. The second thing you’re being investigated for by Cy Vance is your tax returns. Specifically, he wants to know how you classified all those hush money payments to the porn star, into the Playboy playmate, because he’s pretty sure based on what Michael Cohen has told him, that you tried to write those off as legitimate legal expenses. And if you did, that’s tax fraud cause that’s not a legitimate business expense. And so yeah, you’re freaking out right now. And my only guess could be, why you just suddenly burst into this tirade is cause maybe you got some news, maybe your lawyers had a little chat with you recently and said, Hey, things aren’t looking very good up in New York. Otherwise I really can’t think of a single reason why all of a sudden out of the blue you decided to attack the very people investigating you in New York state when you’ve been pretty quiet about that for quite some time. Doesn’t really make any sense unless of course you just found out something that the rest of us don’t know about yet.