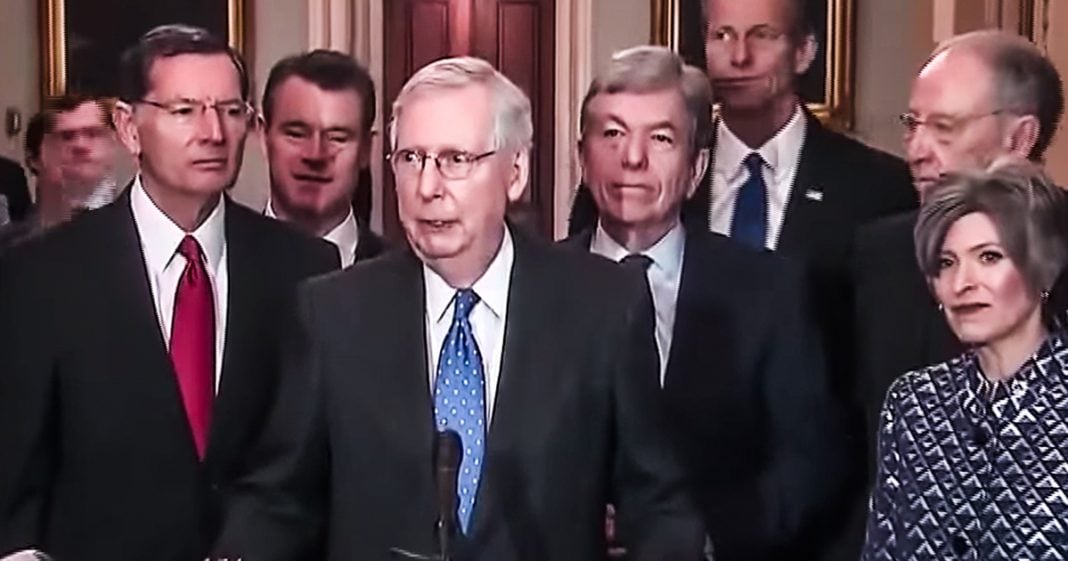 Senate Republicans, led by Mitch McConnell, believed that they had a slam dunk idea to quickly dismiss the articles of impeachment against Donald Trump. But with polls constantly shifting away from Republicans, their strategy might have been an epic miscalculation that could cost them dearly in 2020. Ring of Fire’s Farron Cousins explains what’s at stake for the Republicans.

*This transcript was generated by a third-party transcription software company, so please excuse any typos.
So I want to talk a little more. I know I talked a couple of days ago, but I want to hit on this fact again, right? We have seen the polls of people supporting impeachment rise significantly over the last week and a half to two weeks. I mean, absolutely phenomenal rise in the number of people in this country now, a majority who say that Donald Trump should be convicted and removed in the Senate trial. And the reason I want to bring it back up again is because now we need to look at whether or not this is what the Republicans thought it would be. And the answer is no. Obviously it’s not. Republicans thought they had the slam dunk here. They thought Mitch McConnell specifically, that he could come out and say to the media, say to the world, essentially, I’m working with the white house and the impeachment trial in my Senate is going to go exactly the way they want it. I am going to be coordinating with them every step of the way. And McConnell thought that was the smart thing to do because at the time he believed the polls were accurate, saying that half the country doesn’t think he should be removed. And then as soon as McConnell comes out and says, these things says it’s going to be a sham, I’m going to rig it. I’m gonna let the white house help me rig it. They’re going to tell me how to rig it. Suddenly the public says, hold up now. I don’t like this. I think this guy should be removed from office. Yeah, I, I guess I didn’t call your bluff soon enough, but now you’re saying you’re actually going to go through with with making it a sham. No, I’m not okay with that. So it could be that public opinion has shifted because of Mitch McConnell’s actions. That would make perfect sense. It could be that public opinion has shifted because maybe enough people were actually paying attention to the impeachment hearings in the house to understand that it’s unequivocal that the man broke the law. So now the Republicans find themselves in an unenviable position. Right. The public has turned against them. They’ve got to appease the president because God forbid they go against the grain on that one. So what do they do? If they continue to act like this isn’t a big deal and admit that they’re not going to be fair jurors, like Lindsey Graham is admitted, then the public’s going to get more and more pissed off. If they go through and actually make it a fair and real trial. Trump’s going to be pissed off. But the thing Republicans have to remember, and before I even say this, let me just reiterate, I have no faith in Republicans to do the right thing. Trial will be a sham. Trump will be acquitted and we’ll all have to move on. But nonetheless, the Republicans have to understand that the only people they are accountable for or accountable to, excuse me, is the public. Trump at best, has five years left in office as of today. That’s it. Five. Mitch McConnell, should he win reelection, has six and then another reelection. He’ll probably be too old by then to run again, but some of these other folks won’t. And you’ll have to go and be accountable to your voters. Once again, Trump will be gone. He will have no more power over you, but those voters, those constituents, the people in your States, the people in your districts, you will always and forever be accountable to them. And that to me is what makes no sense about it. Republicans are more terrified of a guy who does have a limited time in office. Then they are to their own constituents who will have to vote for them again and again and again and again. Which one is scarier to you? The person that’s going to hold you accountable for the rest of your life or the person who might be mad at you for the next four years but technically can’t ever touch you. Now, if it were me, I’d be more worried about the people who actually control my fate rather than the massive troll sitting in the white house who the worst thing he’s going to do to you is send out a couple of nasty tweets. But apparently for people like Mitch McConnell and Lindsey Graham, those couple of tweets that could come out are the scariest thing in the world. A bunch of cowards is what they are, and I hope that their constituents understand that they’re selling you out because they’re afraid of a tweet.