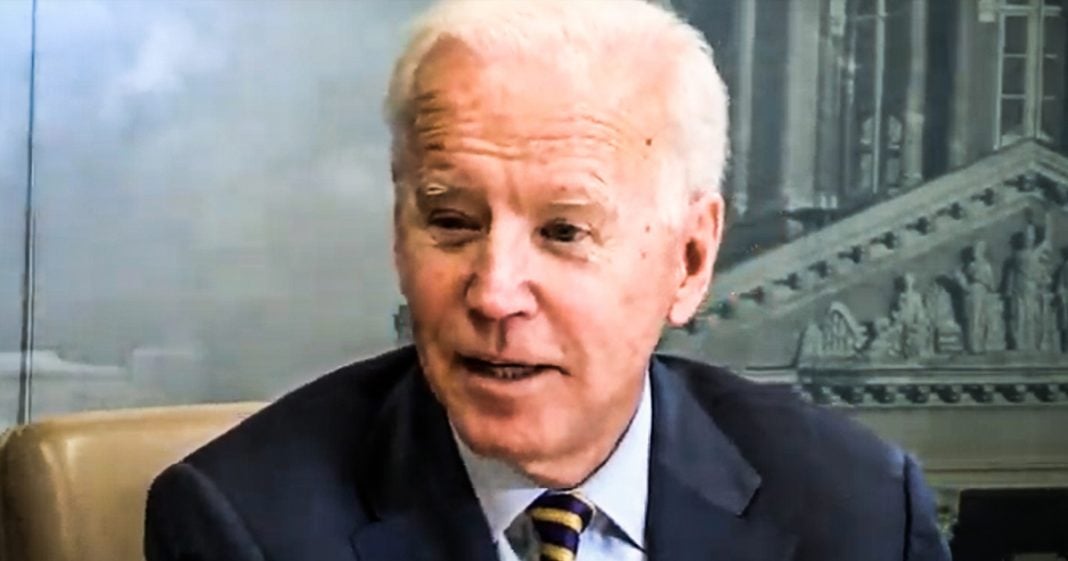 Joe Biden has gone back and forth in the past week about whether or not he’ll comply with subpoenas from Republicans, if they issue them, in the Trump impeachment trial. Not complying would be a mistake, as it would just give the Trump administration more fodder against Biden, and there’s likely no criminal activity that Biden would be implicated in. Ring of Fire’s Farron Cousins discusses the pros and cons of Biden being subpoenaed.

*This transcript was generated by a third-party transcription software company, so please excuse any typos.
Republicans in the Senate have kind of been going back and forth a little bit about whether or not they should subpoena Joe Biden and possibly even his son Hunter Biden as part of their trial for the impeachment of Donald J. Trump. That’s going to be coming up in just a couple of weeks here now. Joe Biden last Friday said that no, if they issue him a subpoena, he absolutely will not comply with that subpoena. I’m not relevant to this impeachment. I don’t know what Donald Trump did, so heck no, that’s a bunch of malarkey. I’m not going to go and comply with this subpoena and then after several hours of public backlash saying, no dude, you, you kind of have to, you don’t want to be on the same page as Trump. Joe Biden came out and said, well, hold up. Let me clarify now. What I meant was I will comply. I know I said I wouldn’t, but I will. I just don’t think I should, but I will. Maybe probably, but I don’t even know. Okay, so right now Joe Biden may or may not comply with a subpoena. I think he’s leaning more towards I will comply if they issue one but they better not issue one. This whole thing is stupid. I am no fan of Joe Biden by any stretch of the imagination and I think people who regularly watch this channel understand that. I don’t like Joe Biden, but I also believe that Joe Biden has not committed any crime whatsoever with this whole Ukraine thing. I think that part of it is silly. It’s, it’s about like Hillary Clinton and Bengazi wasn’t a fan of hers. Still can admit she didn’t do anything wrong with Bengazi, but for Joe Biden, that is what this has become. It’s his emails now. Almost, not that there’s emails involved with it, but comparing it to Hillary, it’s his Bengazi. Right? He didn’t do anything wrong, but Republicans are going to try to pretend he did to deflect away from the real issues and that is one of the biggest reasons why Joe Biden would be a horrible candidate for the presidency because his baggage, even though this part of it is imaginary, Republicans think it’s real and there’s nothing we can do about that. They still think Hillary Clinton should be locked up for her emails. They still believe that 33,000 emails got deleted or that the FBI didn’t take the computers. Those things didn’t happen folks, the FBI got their hands on the computers. They created carbon copies of them, but Republicans still don’t believe it. But for Joe Biden, if he gets subpoenaed, I do believe he should testify. I believe it would be a disaster for him, not because he did anything wrong, but because he’s really not good at talking, but he has to comply because if he doesn’t, what’s going to happen? You’re going to have the Trump administration. You’re going to have Republicans in the Senate and Republicans in the house, in every card carrying member of the Republican party in this country, hammering for years and years about the fact that Joe Biden didn’t comply with a subpoena. They will completely ignore the hypocrisy of it, of the fact that, Oh well, all these Republicans didn’t comply. Trump didn’t comply. Trump ordered his people not to comply. They’ll pretend none of that happened and they’ll only focus on the fact that Joe Biden didn’t comply. And you think I’m crazy. You think that, oh well the public won’t buy that. No, the public will. The public is stupid. You know, I think one of the best lines from the movie men in black is a Tommy Lee Jones character says a person is smart, people are dumb and panicky. And that’s what the public is. The public is stupid, made up of individually smart human beings. So when this Trump administration tries to sell something that they’re guilty of, but they accused somebody else of doing it, they win. They work, it works. I don’t know why, but it does. And that’s what they would do to Joe Biden if he didn’t comply with the subpoena. Now again, Biden tends to screw things up every time he opens his mouth. So God only knows what would happen if the man did comply with a subpoena. But the most important part of all of this is that it is, it is entirely predicated upon whether or not the Republicans decide to subpoena or to not subpoena. And I think at this point they understand that they’re not going to get anything out of this subpoena. So it’d be perfectly honest. I think all of this is hyperbole right now because none of it is actually going to happen. If they subpoena Joe Biden, it means they’re going to have a real involved trial, and I’m sorry, but that’s just not on their agenda.