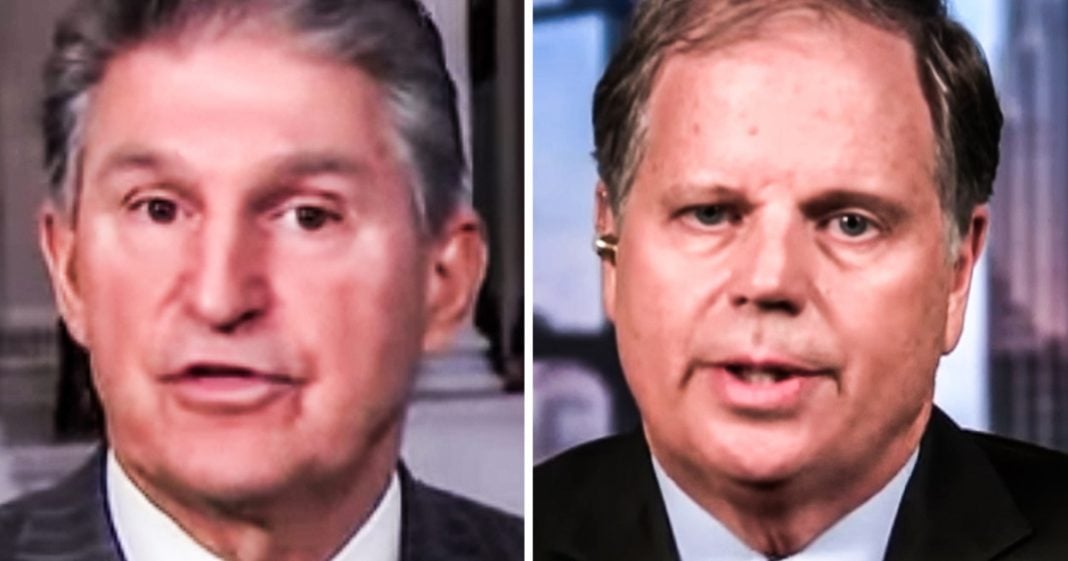 While Democrats may think that there are some weak links in the Senate Republicans’ caucus who could vote to convict Trump, Republicans actually think it’s the other way around. Republicans are confident that they can flip enough Democrats to claim that Trump’s acquittal is “bipartisan,” which would certainly bolster Trump ahead of the 2020 election. Ring of Fire’s Farron Cousins explains what’s happening.

*This transcript was generated by a third-party transcription software company, so please excuse any typos.
Democrats have been buzzing in recent days thinking they got a wonderful Christmas gift in the form of Lisa Murkowski, Republican Senator who said that she doesn’t know that she agrees with Mitch McConnell’s approach to impeachment and Oh my God, you would think that Murkowski said that she had a coalition of 30 Republicans willing to vote to convict Trump with the way the Democrats celebrated that announcement from the milk toast Murkowski, but here’s the truth. While Democrats are out there thinking, Oh, maybe we’ve got a shot at conviction, maybe we can make this happen because of what Murkowski has said, Republicans are out there telling the media that they’re not worried one bit. They’re not scared, and they do not believe for a second that a single Republican in that Senate is going to vote to convict Donald Trump. Furthermore, not only will they see no dissension in the Republican ranks, they also believe they can get at least two Democrats to vote to acquit Donald Trump and thereby go around touting this as a bipartisan acquittal. Now, the two Democrats, they are specifically targeting, the ones I’ve been warning you about for months. Joe Mansion and Doug Jones, two red state Democrats who are about as moderate a Republican light as you can get. Doug Jones is only in the Senate because he ran against a pedophile. I mean, let’s be honest about that. I’m glad he’s a Democrat, but at the same time had to, Alabama Republicans not put them up against Roy Moore who he still barely beat. Nobody would know who Doug Jones is and he wouldn’t be a US Senator. Joe Mansion, pretty much. Same thing. Joe Mansion is a Republican who calls himself a Democrat and doesn’t care about anything the Democrats do. They could both easily vote to acquit Donald Trump because they believe it’ll help them win their reelections, Murkowski, Collins, Romney, all those, you know, weaker Republicans who have been wringing their hands over all this like, Oh, sure looks like Trump may have done some bad things and I don’t know if I like what Mitch McConnell’s doing with it. They did the same thing for Brett Kavanaugh and it changed nothing nothing. He still got confirmed. He still confirmed him. He still voted that way. But you kind of led the public on thinking that maybe you had a conscience and that’s why I don’t trust any of these people. I don’t think actually Romney was a part of that, but you know what I mean? That’s the problem with these mealy mouth Republicans. They do this for attention. They think it’s going to help them maybe make their constituents think for a second that they’re not absolute horrible garbage people, but at the end of the day, they’re going to vote to acquit the guy. The Republicans are correct. It is more likely they will get Democrats to flip than the Democrats getting Republicans to flip. And I’m not sitting here cheering on the Republicans by any stretch of the imagination folks, but we gotta be realistic about this. We knew from the start this thing wasn’t going to pass the Senate. We have to stop buying into the hype from the media saying, Oh, Murkowski may flip and this could start an avalanche. I read that friggin this morning. It could start an avalanche of other Republicans. It’s not, don’t get your hopes up. Don’t sit there thinking that we’ve got a chance only to be disappointed and let down. You want to beat Donald Trump. You want to get him out of office. Go inform people about some of the policies the democratic presidential candidates are proposing. Go talk about that. Go talk about how they are going to help the lives of average American citizens, not the top 1% that’s how we get Trump out of office. We focus on the policy. We nominate a good candidate, but if we think it’s going to happen with the impeachment, then we are absolutely just as delusional as the people on Twitter who say, Trump is the best president ever.