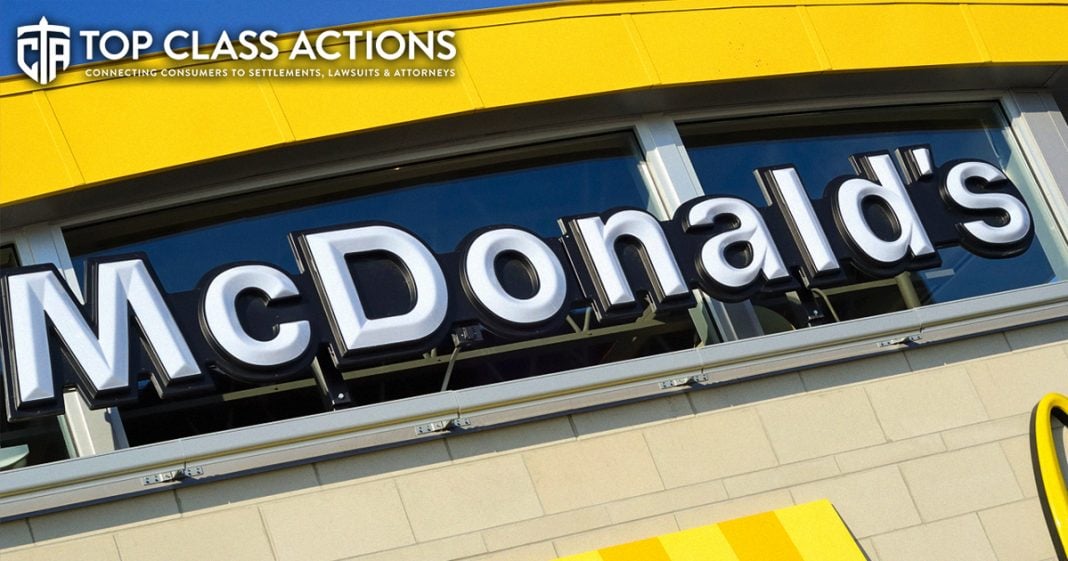 McDonald’s does not do enough to prevent violence towards its employees, according to a recent lawsuit. The McDonald’s lawsuit was filed by Chicago employees who say they were affected by violence coming from customers during their time of employment. The employees say they and their coworkers are at risk of being attacked on a daily basis while they are at work. The plaintiffs claim that they have experienced a range of violent events including one case when a customer jumped over the counter and brandished a gun at employees. Ring of Fire’s Farron Cousins discusses this with Scott Hardy, President of Top Class Actions.

Farron Cousins:                  In recent weeks, we’ve seen a lot of stories on the news about fast food customers becoming irate for one reason or another. Maybe they’re out of that hugely popular chicken sandwich or maybe their order was wrong. They jumped the counter, they attack the employees at the store. And according to a new class action lawsuit brought by McDonald’s employees, both current and former in Chicago, these attacks happen more frequently than the public thinks. And unfortunately the lawsuit says McDonald’s is doing virtually nothing to stop these attacks.

Joining me now to talk about this is Scott Hardy with Top Class Actions, and Scott, as I mentioned, we’ve seen lots of stories about this recently happening at multiple different fast food chains. But until I read this story, I really didn’t know how bad this situation actually is. This, this is more than just a few comical headlines of an, you know, customer getting mad about a chicken sandwich not being available. We’re talking about real incidents of assault, of, you know, threatening these workers with, with guns. This is a big deal what’s happening to some of these McDonald’s employees, isn’t it?

Scott Hardy:                          It is. And, and these things can have lasting problems and implications on these employees due to the stress involved of having someone jump over a counter and brandish a gun at them. Another customer jumped over the counter and removed their clothing and started throwing kitchen equipment at employees. According to this class action, in Chicago alone, there are more than 20 emergency service calls every single day at McDonald’s in the Chicago area. Now, those don’t all involve police, but 20 emergency calls per day are made just from the Chicago area McDonald’s.

There’s news of a reported violence at a McDonald’s nationwide every 36 hours. And so that’s, everything 36 to, every 36 hours there’s news of violence at a McDonald’s, that’s reported. And that’s just that’s reported. That’s the crazy thing is you have to think if that’s what’s reported, there’s going to be a ton that goes unreported and really shows that there needs to be a, a much better policy and safety concern for McDonald’s employees as a whole, because people still want to get their burgers late at night, but we have to keep those employees safe.

Farron Cousins:                  You know, my, my first job was at a McDonald’s, spent two years there from age 15 to 17. We never had any incidents of customers jumping over a counter or trying to physically assault us. But, you know, the few times we did have super irate people come in, we had managers that would come out deescalate, you know, tell the customer, hey, whatever you need, whatever you want, we’ll get it for you. Don’t worry about the price. You know, I’m sorry you got shorted a couple of fries, we’ll give you an extra large fry. Please calm down and be on your way. But those de-escalation techniques, which I, I, they, they were taught these back then. Something’s been lost along the way. Right? You, you, you have management and you have store owners, franchise owners that don’t seem to really care anymore.

It’s all about the profit, not necessarily in spite of all these headlines, keeping the employees safe. And you’ve got to get back to that mentality. The de-escalation. Obviously there’s crazy people in this world. There’s lots of crazy people in this country. You can’t stop everything. But the people who do just become irate because maybe their order was wrong, maybe they accidentally put pickles on something that wasn’t supposed to have pickles and that seems silly to people. But those are things that are happening. That is where these de-escalation techniques can come in, if you offer proper training to protect these employees

Scott Hardy:                          Yeah, you’ve got to have the proper training. Another part of this class action is stating that, you know, every McDonald’s you drive by has all of these posters on the windows which blocks visibility late at night. So police who are driving by can’t see if someone’s throwing a fit and harassing or attacking employees through the windows because of all those posters. They also want more strong physical barriers between the customers and the person taking their order. But, the low checkout counters were added to the restaurants as part of a nationwide remodeling effort to make the restaurant seem more open and inviting. And those low checkout counters make it a lot easier for someone who’s irate to attack the poor McDonald’s employee that’s, that’s just trying to help them out.

Farron Cousins:                  And, you know, this, this is a company, obviously they have the money. They, they could implement these changes. They could, you know, change the designs a little bit without having to shut stores down for days on end. They, they could do lots of things and they’re not, and they’re leaving these employees in danger because of that. So I think these employees, they’ve got a pretty strong case here. They know they’re going up against a multibillion dollar global corporation and they’re not afraid too. And that’s also a good message that we need to send to people. It doesn’t matter the size of the company you’re going up against, if, if they’ve done you wrong, stand up, do something because you’d be surprised at how frequently you can actually win these David versus Goliath cases. And this appears to be one of those as well.

Scott Hardy:                          Yeah, you really do need to talk to your fellow workers and figure out if this is a, a larger problem. It’s not an isolated issue. You absolutely should work together to get help. You know, this is, this is completely unacceptable and, you know, McDonald’s has two options. Don’t people in their, their dining area after a certain hour or fix it, make it more secure. You know, we, we can’t have these thousands upon thousands of McDonald’s employees who work every night get, get harmed and have their safety threatened.

Farron Cousins:                  And this is also a good message that needs to be sent apparently and unfortunately to all the other fast food chains out there that are probably experiencing similar situations. For more information about this issue, please follow the link in the description of this video, head on over to Top Class Actions and make sure you sign up for their weekly newsletter. Scott Hardy with Top Class Actions, thank you very much for talking with us.