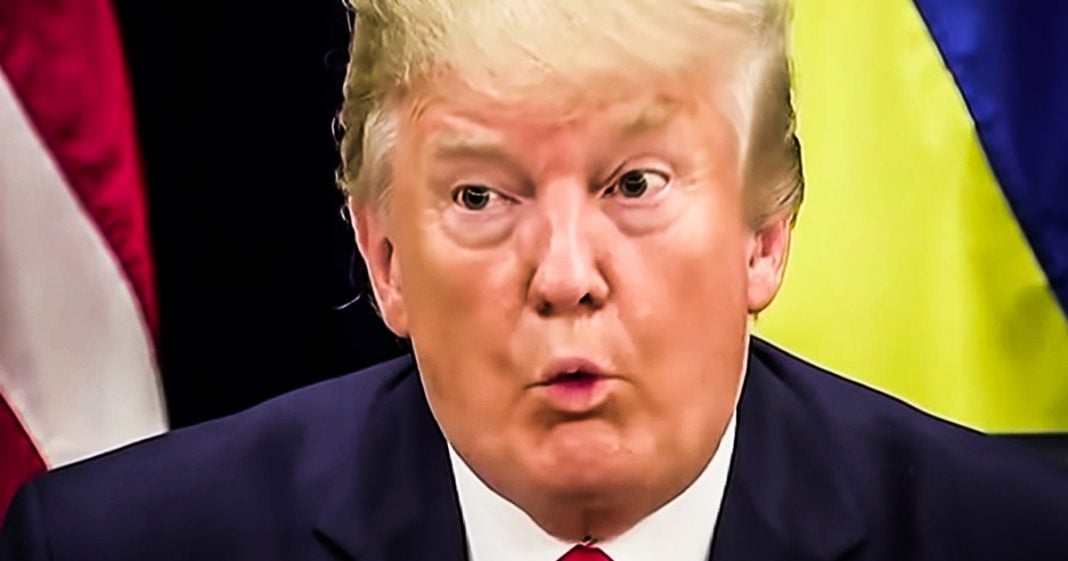 According to recently released emails, the Pentagon believed that Donald Trump was breaking the law with his decision to withhold aid to Ukraine earlier this year, and they made that very clear to the President. These documents show that Trump’s team in the government wasn’t behind his decision and they knew that something was amiss. This story is much bigger than the impeachment inquiry even knew at the time, making it all the more disappointing that this info wasn’t included in the hearing. Ring of Fire’s Farron Cousins discusses this.

So yesterday, a bunch of unredacted emails were released with regard to Donald Trump’s decision to withhold aid to Ukraine. And they paint a picture that tells us explicitly that one, Donald Trump approved the hold of the aid. Two, the Pentagon knew that it was illegal. Three, Donald Trump was informed that this was illegal. And four, that the justice department did everything they possibly could to convince the Pentagon that, no, this is not illegal. Nothing that we’re doing here is wrong. Don’t even worry about this. We’ve got it all taken care of. Thank you very much and have a nice day. Well, here’s a little more in depth, even though that essentially was the whole story. Let’s dig into it just a little bit more. Here’s what happened. You had officials over at the department of defense who were emailing back and forth with people from the office of management and budget, and the department of defense was telling the OMB in these emails, hey, um, you can’t withhold this aid.

This is a violation of the impoundment control act because you haven’t notified Congress one, that the aid is even being withheld. And two, why it is being withheld. Essentially your breaking the law here and there’s only so much we can do over here at the department of defense to cover for you and keep giving excuses as to why this hasn’t happened. You can’t do this. You gotta let everybody know they’re breaking the law. You got to release this. OMB didn’t seem to care because the justice department steps in and the justice department comes over and says to the DOD, don’t worry about it. We have this covered. Donald Trump has ordered this. This is totally legal. To which the Pentagon then came back and said, no, it’s not. It doesn’t matter if the president ordered this. This is still illegal. The impoundment control act. What part of that wasn’t clear to you, justice department?

And that’s what we know now. Trump ordered it. Pentagon said it was illegal, warned everybody it was illegal and the DOJ stepped in to provide a little bit of cover for Donald Trump. There is no question anymore that Donald Trump did this and that it was in fact illegal. Doesn’t matter his reasoning for it, doesn’t matter his rationale. He did it because he wanted dirt on Joe Biden from Ukraine. They couldn’t deliver so he didn’t deliver. And again, this is just another one of those stories that makes you wonder, why did we already have the vote on impeachment? Did the Democrats in the House, did they have this info when they voted on impeachment? Because if not, that kind of seems like a big deal. This seems like the kind of thing you would want to include in that because as I have said a hundred times, and I’ll say it a hundred times more, the House was the only shot we had.

We know the Senate’s not going to give us a fair trial. As it stands right now, McConnell’s not even going to call any witnesses in this trial. So we can’t get the people named in these emails to come and explain to us what they knew, who they told and when they told it to them. Even though we don’t even need that because we now have the unredacted emails. We know who said what to whom and when they said it. But it would be great to have those people on record saying it. And if only the Democrats hadn’t rushed the impeachment in the House of representatives, we could have already called every single one of these persons sent them their subpoena and said, guess what? You’re going to come and talk to us next week about this. But they didn’t. And this is where we are now. Slow leaks of information that’s more and more damning to the president every couple of days. Meanwhile, the articles of impeachment are already sitting there getting stale because Democrats decided to vote on those two weeks ago before all this new crazy information even emerged.