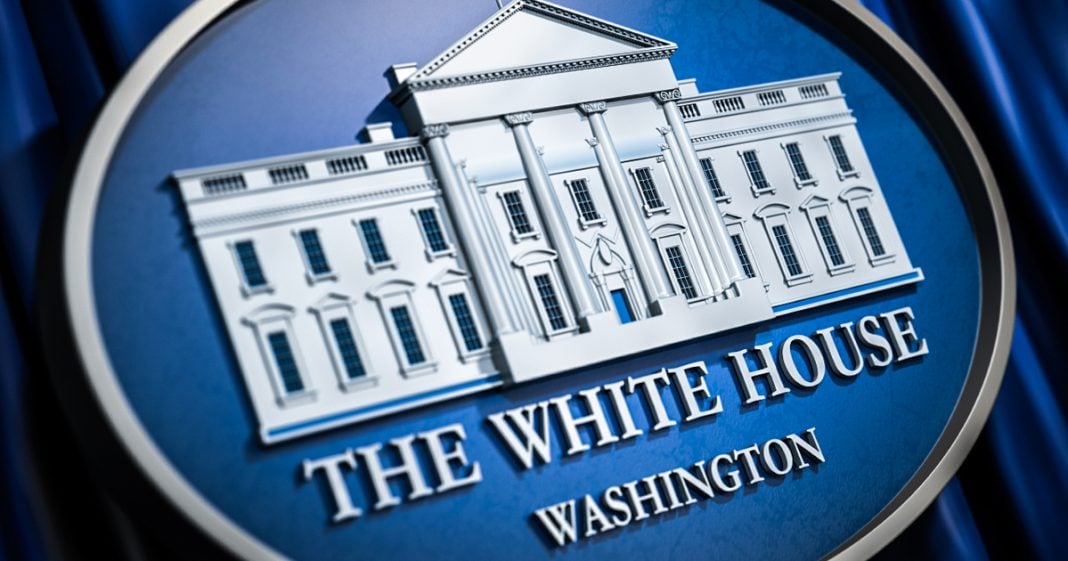 The White House is crafting a new message about impeachment: It never actually happened. They are basing this theory on a legal scholar’s op-ed saying that impeachment only happens when the vote in the House concludes AND the articles are sent to the Senate for trial. Since Pelosi has not sent the articles to the Senate yet, the White House believes that the process has not quite finished, and therefore Trump wasn’t impeached. Ring of Fire’s Farron Cousins explains what’s happening.

*This transcript was generated by a third-party transcription software company, so please excuse any typos.
Right now the white house is crafting a new plan in their impeachment defense of Donald Trump, and that plan is this. The impeachment never actually happened and they’re basing that argument on an op-ed from a Harvard law professor by the name of Noah Feldman, who also happened to be one of the legal experts that the Democrats called in to testify during the impeachment proceedings. Mr Feldman is 100% in the belief that Donald Trump should be impeached and removed from office. He does believe that Donald Trump committed those crimes, but at the same time, Mr Feldman argued in a recent op-ed that Donald Trump was not in fact impeached yet. Here’s what he said, in this op-ed, impeachment as contemplated by the constitution, does not consist merely of the vote by the house, but of the process of sending the articles to the Senate for trial, both parts are necessary to make an impeachment under the constitution. The house must actually send the articles and send managers to the Senate to prosecute the impeachment and the Senate must actually hold a trial. If the house does not communicate its impeachment to the Senate. It hasn’t actually impeached the president. If the articles are not transmitted. Trump could legitimately say that he wasn’t truly impeached at all. And that appears to be the path that the white house is considering going at this point. They want to make the argument to the public that, Hey, you know that thing that just happened? Yeah, totally didn’t actually happen. This guy was not impeached. Another Harvard law professor by the name of Lawrence Tribe came along shortly after and said, yeah, I love you Feldman, but you’re totally wrong about this. And Tribe said, uh, under article one, section two, clause five, he was impeached on December 18th, 2019 he will forever remain impeached. Period. That portion of the constitution says that the house of representatives shall have the sole power of impeachment. So kind of up one of those crossroads, I guess, right? Almost like a Supreme court case. Depends on your interpretation of the constitution. Now, if you believe that the constitution says what it says, then yeah, the president was impeached. If you want to read things into it, that likely aren’t there, but you could probably make a case that they should be there and they were meant to be there. Then maybe you could argue he wasn’t impeached. But here’s the thing. The white house is considering using this argument from Feldman as their new defense, that hey, it didn’t actually happen. And part of the reason for this is not just because they think they can hoodwink the public. I mean as a whole, the public not that great on things, uh, but they’re not that dumb. The reason they want to use this argument is to force Pelosi’s hand to force her to send those articles over to the Senate where Mitch McConnell will quickly dispose of them. That’s what this is all about. It’s not about trying to convince the public that what they saw happened didn’t actually happen. It’s to force Nancy Pelosi to send those articles over and make the whole thing go away. Because until that happens, those articles are just sitting there. They’re hanging over Donald Trump’s head, like some kind of haunted mistletoe and he can’t get out from under it and it’s driving him insane. But we’re going to see more insane arguments like this as time takes by the longer Polosi holds on to those articles, the more unhinge this entire administration is going to become, which is going to make them far more riuh- likely to rely on these kind of, you know, skeptical, weird legal arguments that when you look at the actual constitution, you see that those arguments made by people like Feldman aren’t actually in there.