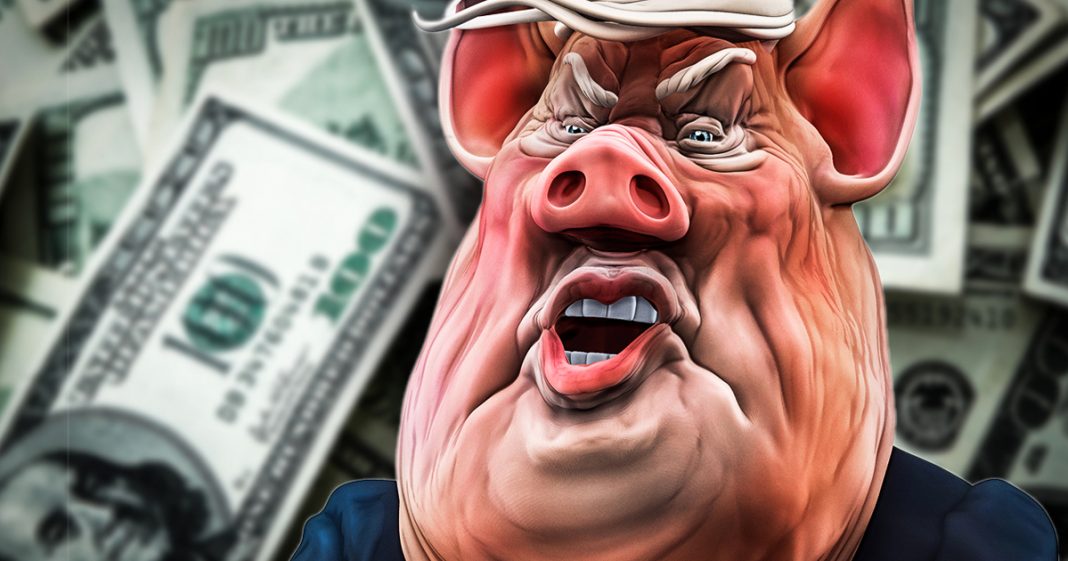 Most Americans disapprove of the tax cut package that Trump and the Republicans rammed through just two years ago, and for good reason. The majority of the benefits went to those at the top, and the majority of workers say they haven’t seen any kind of bump in their paychecks. To make things worse, the deficit is soaring, and we’re running out of money to pay for vital services. Ring of Fire’s Farron Cousins explains what’s happening.

*This transcript was generated by a third-party transcription software company, so please excuse any typos.
So with today being new year’s day, it is officially two years since Donald Trump and the Republicans tax cuts have been in effect for corporations. Now for the average American citizen, those tax cuts have only been in effect for one full year, but nonetheless, two full years of Republican tax cuts, tax cuts, that by the way, Donald Trump promised us we’re going to be quote rocket fuel for the economy. So the big question is where has that rocket fuel taken us? Where is it exactly? And the answer is in the pockets of the top 1% I know I’ve hammered on this issue a lot over the last couple of years, in fact, even in the last couple of weeks. Well, guess what, folks, I am going to continue hammering on this issue until these tax cuts are repealed. And I think every single Democrat running for office right now needs to be doing the same thing. Because here’s the truth, Donald Trump said they’d be rocket fuel for the economy. Do you know what kind of economic growth we saw in all of 2019 2.9% 2.9% economic growth throughout the entire calendar year. We saw 2.9% growth of the overall economy in the year 2015 so before we had the tax cuts, we were still growing at the same rate. We’re growing now with the tax cuts, except we also had a $1 trillion deficit in 2019 $1 trillion. Why? Oh, because corporate tax revenues fell by 31% I’m sure that played a big role in it. Not to mention the fact that we’re spending more money obviously than we’re taking in, but we’re reducing the amount we take in without reducing the amount we’re spending. Now, typically, I’m not a big deficit matters kind of person because in reality it doesn’t matter all that much except for when Republicans come for our social programs, which is exactly what they’re doing. Republicans want to cut social security. They want to cut Medicaid and Medicare in order to pay down that deficit because God forbid they reduce the military budget. God forbid they repeal the tax cuts. No, they’re not going to do that. That benefits the wealthy people. So instead they’re going to come for programs that benefit the poor. They’ve cut back on school lunch programs here in the United States. They’re trying to rewrite how we define poverty, change actual math on that so that fewer people get food stamp assistance so we can save some money there. That’s why these stories matter. These tax cuts have actually crippled the economy. They haven’t helped. Workers didn’t get multiple bonuses. Corporations did that as a onetime thing to get some positive publicity. They didn’t get raises. Less than 13% of the tax cuts savings that corporations received went towards investing in their own company and giving their employees pay raises. Less than 13% of that money, we’re still struggling. And if the Republicans in charge of this country have any say in it, they’re going to make us struggle a whole hell of a lot more once they start cutting those social programs to pay for these tax cuts.