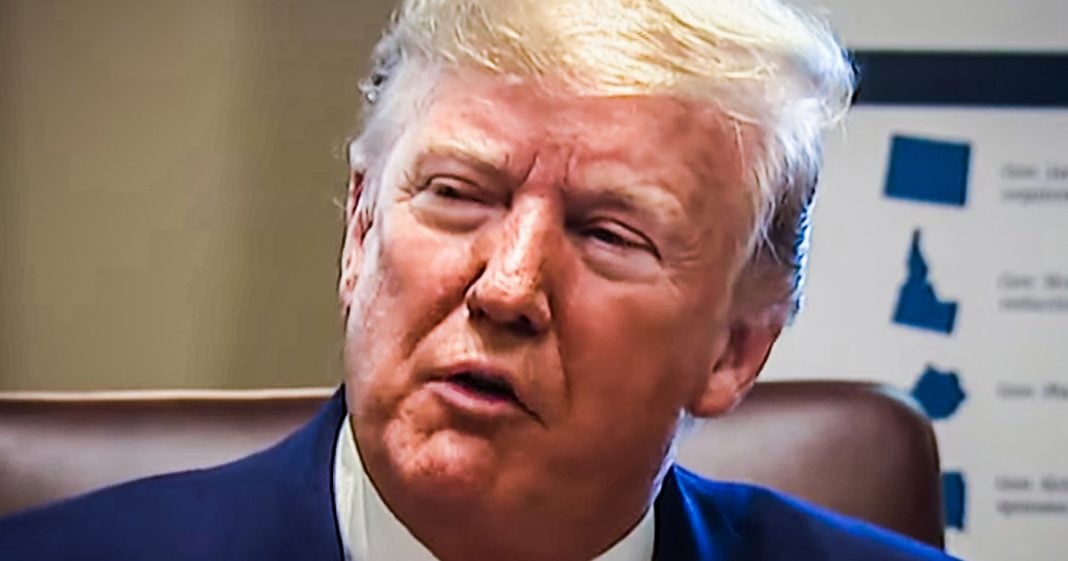 According to a lawyer for one of the former workers, the Trump Winery in Virginia knowingly hired undocumented workers and then fired them all after the season was over. This is not the first time that the Trump Organization has been found to be using undocumented immigrants as workers, and it is further proof that the wealthy elite LOVE illegal immigration because it provides them with a cheap source of labor. Ring of Fire’s Farron Cousins discusses this.

You know, it’s hard to think of anybody in this country who loves illegal immigrants more than Donald Trump. Not just because they provide a super cheap and wonderful source of labor for his businesses, but also because they have given him one of the biggest straw men upon which he launched his election in 2015 and he’s doing it again in 2020. He loves undocumented workers here in the United States because they provide him with everything he needs, both for his businesses and for his political career. But according to a recent report, earlier this week, the Trump winery in Virginia fired a bunch of undocumented immigrants, some of whom had been working at this winery for years. But, they were forced to fire these undocumented workers because word was getting out to the public that Trump winery was using illegal immigrants in their fields. Now that story was first reported back in may.

So why didn’t they fire all these undocumented immigrants back then? Well because they actually needed them to finish up the picking season and once that season ended they said bye workers, I know some of you have been here for years. I know some of you even know us personally, according to your lawyer, but you got to go. The heats on us now. I’m up for reelection. How’s it going to look when I’m out there saying illegal immigrants want to rape and kill you when I’m over here employing dozens of them? And by the way, not just at Trump winery either. As we have previously reported, Donald Trump’s organization has been using undocumented immigrants as a cheap source of labor all over the country. They’ve been doing it in New Jersey. They have been doing it down here in Florida. They love undocumented immigrants and in many instances, specifically up in New Jersey, according to the report, some of the managers up there actually helped these undocumented workers get fake documents so that they could work here legally.

Now with the Trump winery story, these workers claim that yes, they got their fake documents, but they were never checked. It was understood that these people were illegal and that their documents were fake. So in order to avoid any problems, Trump winery just said we don’t care, it was basically a don’t ask, don’t tell situation for undocumented workers. The truth is folks, the wealthy elite, corporations, whoever it is, they love illegal immigrants here in the United States. They are a cheap source of labor and yet these are the same people who go out there and tell you that these undocumented workers are taking your jobs and they know that because they’re the ones firing American workers and hiring illegal workers.

But another side of that, as the state of Georgia found out just a couple of years ago, if you get rid of these guest visa programs, if you severely criminalize the hiring of undocumented workers, guess what happens? Jobs don’t get done. Businesses go under. Believe it or not, the US economy is actually pretty much dependent upon foreign workers, both documented and undocumented here in the United States. We need them and because of that, they are severely taken advantage of, paying wages far less than minimum wage, put in dangerous positions at work because there are no protections in place. And if they get hurt, what are they going to do? If they try to file a lawsuit, there’ll be exposed as illegal and deported back to their home country. And then the company just goes back, hires another undocumented person to take their place. These people are being taken advantage of by the wealthy elite, and that extends all the way up to Donald Trump. We have to make the system better. We have to be better as a country. We need these people coming over here and working, but at the same time, we have to extend protections to them so that corporations can stop taking advantage of them.