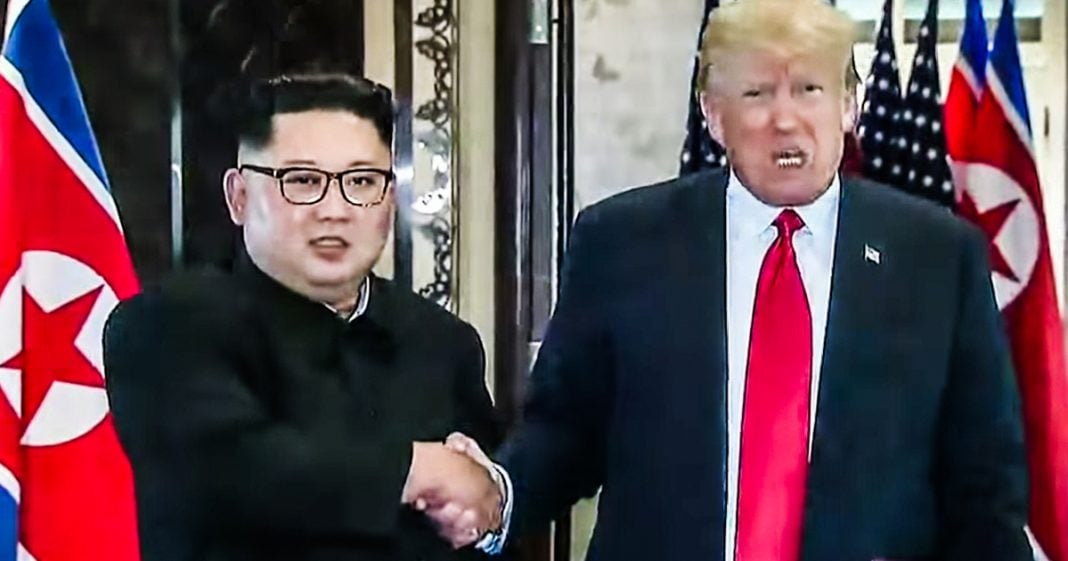 After North Korea announced that they would no longer be adhering to their “agreement” with Donald Trump and would be testing out new nuclear missiles, the President claimed that he trusts Kim Jong-un and that he’s a man of his word. The President refuses to admit that his talks with Kim have been an absolute failure, and now that failure could seriously be jeopardizing our safety. Ring of Fire’s Farron Cousins discusses this.

Trump has spent every day of the last week and a half at one of his golf courses playing golf. During that time, he also attended a New Year’s Eve bash at Mar-a-Lago. And also during that time, Kim Jong-un dictator of North Korea announced that, guess what? We’re not denuclearized. In fact, we’re going to start testing new Intercontinental ballistic missiles and nuclear weapons. So, as Donald Trump walked into his New Year’s Eve party at Mar-a-Lago a reporter asked him, hey, um, bad things are happening with North Korea. They’re not adhering to any part of this alleged agreement you made with them. What say you, mr. president? and Donald Trump responded. He likes me. I like him. We get along. He’s representing his country. I’m representing my country. We have to do what we have to do. But he did sign a contract. He did sign an agreement talking about denuclearization, that was done in Singapore, and I think he’s a man of his word. So we’re going to find out.

He’s a man of his word folks. The man who literally just said, I’m not keeping my word, but the only person on the planet who is surprised by this story is Donald Trump. The rest of us knew from day one, from the first time he announced he was going to meet with this nut job, that this was never going to happen. Nuclear weapons are about the only bargaining chip that North Korea has on the global stage. They’re not going to get rid of those. Furthermore, the United States who has the biggest arsenal of nuclear weapons, we can’t demand that other countries don’t have what we have. That’s a bit hypocritical isn’t it? If we want other countries to get rid of their nuclear weapons, we have to do the same. We have to lead by example, but of course we’re not willing to do that because that’s also our big bargaining chip, how we get to bully the rest of the countries on the planet by saying, really, you don’t want to play nice with us?

Have you seen our nuclear arsenal? It’s pretty big and you don’t have any. So yeah, the US isn’t going to denuclearize. North Korea is sure as hell isn’t going to denuclearize and again, we knew this from the start. But denuclearization of North Korea was never Donald Trump’s goal. Donald Trump only wanted real estate deals in North Korea. He needs Kim Jong-un to cooperate just enough with whatever agreement they may have in place so that he can make sure that US businesses, including the Trump organization, are allowed to freely go into North Korea, buy up some super cheap property, build these gaudy casinos, hotels, high rises, whatever it is, so that they can make a quick buck. That is what these deals have always been about. That is what Donald Trump has talked about after every single meeting he’s had with Kim Jong-un. He’s talked about the beautiful real estate, the investment opportunities. He doesn’t care about denuclearization. He doesn’t care about what Kim Jong-un is doing to his own people in his country. As long as Donald Trump can make a quick buck, he’ll still go out there like he did right before that New Year’s Eve party a couple of nights ago. He’ll defend his decisions. He’ll cover for Kim Jong-un, because if he pisses him off, there go all those wonderful real estate deals.