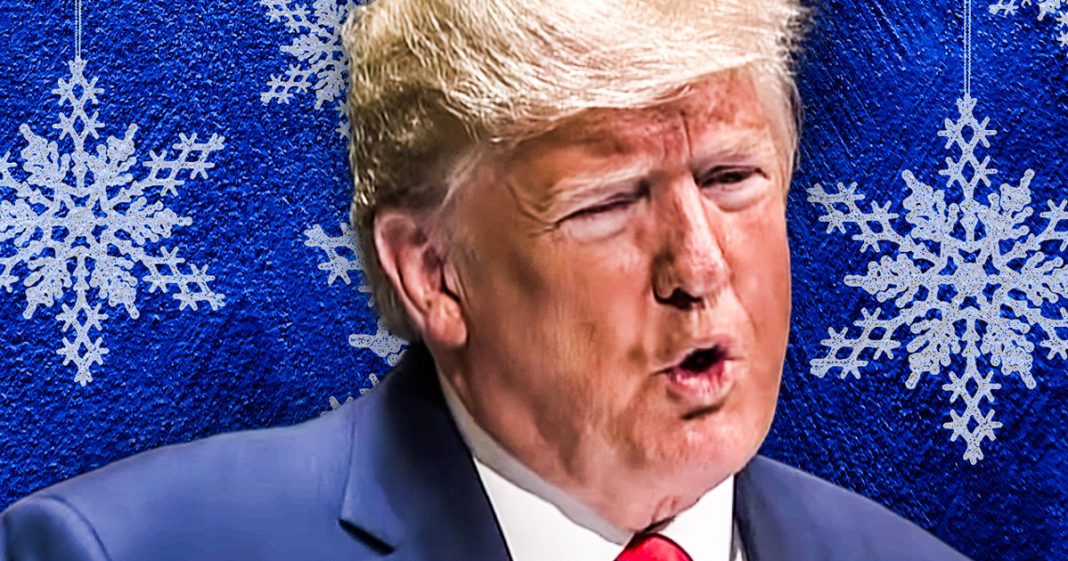 The Trump reelection campaign has launched a new website featuring arguments that Trump supporters can make to their liberal “snowflake” friends and family members to make Trump look better. The site is filled with over-inflated jobs figures and economic statistics, coupled with outright lies and falsehoods. Ring of Fire’s Farron Cousins goes through the website and debunks their ridiculous talking points.

*This transcript was generated by a third-party transcription software company, so please excuse any typos.
Last week, just in time for Christmas, the Trump campaign launched a new website called snowflakevictory.com and the point of this website, which is still up and I imagined going to be running all through the campaign season, is to provide Trump supporters with the necessary talking points to handle their liberal snowflake friends and family. Now they wanted it to be just for Christmas, but like I said, it’s still up here. A week later they wanted to keep going because to be honest, it’s not a bad idea other than obviously the fact that this website is filled with the overinflated economic numbers and outright falsehoods. So folks, let’s do this. Let’s go through snowflakevictory.com. Let’s look at some of these talking points and find out what these Trumpsters are telling their friends and family. So here we go. The Trump economy is strong as the number one thing here. We are enjoying the hottest and strongest eco- economy this country has had in 50 years. And this is due to president Trump’s, Trump’s common sense job creating. Uh, here are some points you can highlight for your liberal friends and family and it’s all backed up by facts, not feelings. The US has added more than 7 million new jobs since president Trump was elected. That is not true. That is an overinflated number. We have not added 7 million new jobs. Um, we also have, uh, this includes over 500,000 new manufacturing jobs and nearly 4 million jobs for women. Again, both those numbers are over inflated. The real numbers are nowhere near that. Uh, monthly jobs reports are showing that the Trump economy is still soaring there. They’re not showing that at all. They’re, they’re not. They’re all having to be revised downward like two or three months later. Sometimes because you overinflated the numbers by as much as 30 or 40%. No, not that great. The Trump economy is boosting every community. Not mine. Probably not yours either. I would imagine. Because here’s the thing about Trump’s economy, and this actually goes back to the Obama economy too. Yeah. It looks great on paper. Unemployment rate is down. We are creating more jobs than we’re losing. People are working of every nationality here in the United States. The problem is nearly half of those jobs are what’s considered low wage, paying less than $18,000 a year. They’re poverty jobs folks. So no, that doesn’t count as a strong economy when only those at the top are doing well. Here’s another category. It is important to enforce immigration and immigration and law and build the wall. Let’s start debunking some of these liberal lies. What about those detention cages? The so called cages used at detention facilities were first built and used under the Obama administration. As a matter of fact, the Obama administration and Joe Biden started using them as early as 2014. And that’s, that’s all it says about the cages. So your defense of your guy putting kids in cages is to say, Whoa, will the black guy put kids in cages too Joe Biden, put kids in cages and his started in like 2014 so we’re just, we’re just doing what they did. That’s not a friggin excuse. Obama was shitty for doing it. So is Trump. That’s the point. It doesn’t matter if it was a liberal or conservative, putting a child in a cage is wrong, especially considering the fact that the majority of these people did nothing illegal. They’re not criminals. And the ones who did do something illegal, like crossing the border when you weren’t allowed to, uh, that’s a misdemeanor by the way, certainly does not warrant being shoved into a cage. So let’s continue, uh, other countries paying their fair share and trade deals, that or not trade deals. But excuse me, with the organizations, you know, NATO, the UN, something like that. Literally nobody in this country ever cared about that, that, that’s not even a talking point. I can’t imagine sitting down to a holiday dinner with somebody or going to a birthday party and somebody saying, Hey, how great is it that we got Lithuania to throw in a couple of million right into NATO? You’re gonna look at him and say, what? I don’t even know what any of that means. Are they even a part of NATO? I don’t know. And I don’t care. Trump approach to healthcare much better than Dems who would kill employer provided coverage. Oh yeah. Yeah. Because everybody’s clamoring to go out and talk about how awesome their healthcare is from their employer. I have a wonderful employer with a worst possible healthcare plan you could imagine, why? Cause that’s really all that’s available in my area. It’s the cheapest one for them, not for me. It sucks. Majority of people in this country also think that their personal healthcare plan sucks. So anyway, folks, if you have some time of your own, I encourage you to go look around on snowflakevictory.com and that way when one of your idiotic Maga hat wearing relatives comes at you with one of these stupid talking points, you can already be prepared to debunk it.