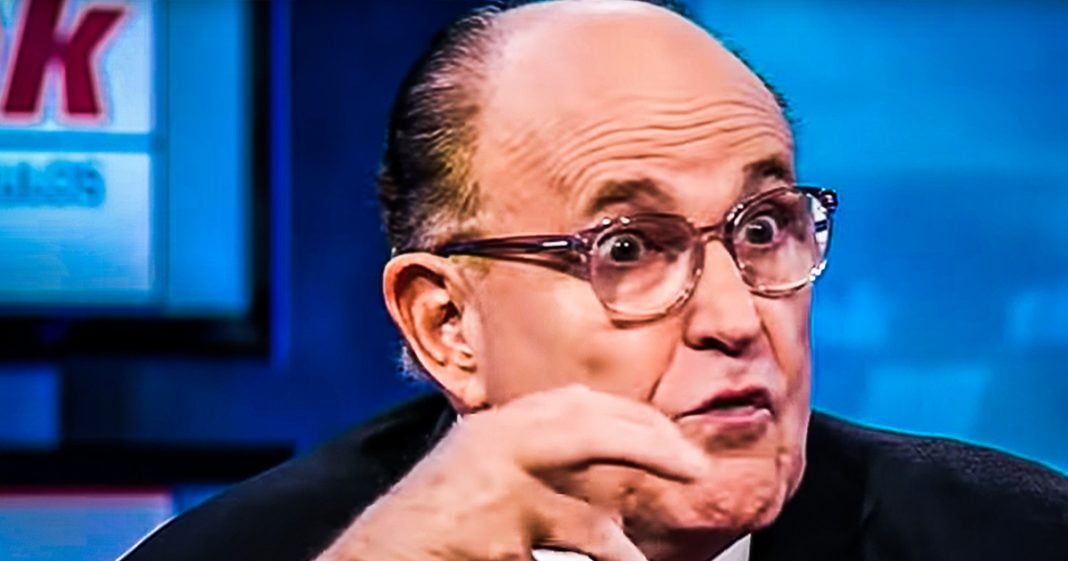 Rudy Giuliani has been actively trying to meet with Republican Senators ahead of the impeachment trial, but Republicans are united in their efforts to completely avoid the President’s lawyer. They are afraid that the conspiracy theories that he’s pushing are only going to cause further harm to the President and the Party and they want absolutely nothing to do with him. Ring of Fire’s Farron Cousins explains what’s happening.

*This transcript was generated by a third-party transcription software company, so please excuse any typos.
Rudy Giuliani recently returned from his trip from the Ukraine, only defined that nobody in the Senate at least wants to talk to him. No Republicans in the Senate are willing to sit down with Rudy Giuliani and discuss what kind of dirt he was able to dig up about Rudy Giuliani. According to a new report in the daily beast, Republican senators are actively avoiding having to get anywhere near Rudy Giuliani because they’re afraid that the conspiracy theories that he’s currently pedaling are only going to hurt both Donald Trump and the Republican party as a whole. Now, this story kind of makes you feel a little bit, sorry for Rudy Giuliani, right? I mean, he went over there. He brought the little crew from the a one America news network. He talked to all these people, all these high ranking current and former government officials digging up all this dirt on Joe Biden because, Hey, isn’t that what Republicans want? You want to take down this Democrat only to come home and find out that nobody believes what you have to say. And I’m not just talking about the general public, I’m talking about members of his own party. The people who will be preceding over this Senate impeachment trial don’t want to talk to pour little Rudy. And to be honest, they’re absolutely correct. After all, Rudy Giuliani has been over there meeting with people who have zero credibility, people who are peddling conspiracy theories about Joe Biden and the, uh, Ukrainians hacking the election in 2016 in order to help Hillary Clinton. I mean, just a couple of days ago, Lindsey Graham came out and said, I don’t know if I want to, you know, put all my eggs in the Rudy Giuliani basket, uh, to kind of paraphrase him there because he doesn’t know if, if he can really trust him. So the question I have is, well then, what was this whole trip to the Ukraine for, right? I, why was Rudy Giuliani over there? If he’s not working for the Republicans in the Senate than who exactly is he working for? Could it be that the president of the United States sent an American citizen, his own personal attorney over to another country to work with foreign nationals to dig up dirt to help sway a presidential election here in the United States? No, certainly couldn’t be that after all such activity would be illegal here in the United States. And to be honest, I think that’s where we need to focus. And I think that’s what Republicans are actually scared of. It’s not that they’re afraid of conspiracy theories. We’ve seen them pedal them for decades. They’re afraid that they understand that Rudy Giuliani is acting as a foreign agent, working with foreign officials, trying to sway the United States 2020 presidential election. And again, that if it is what Rudy Giuliani is doing is 100% illegal.