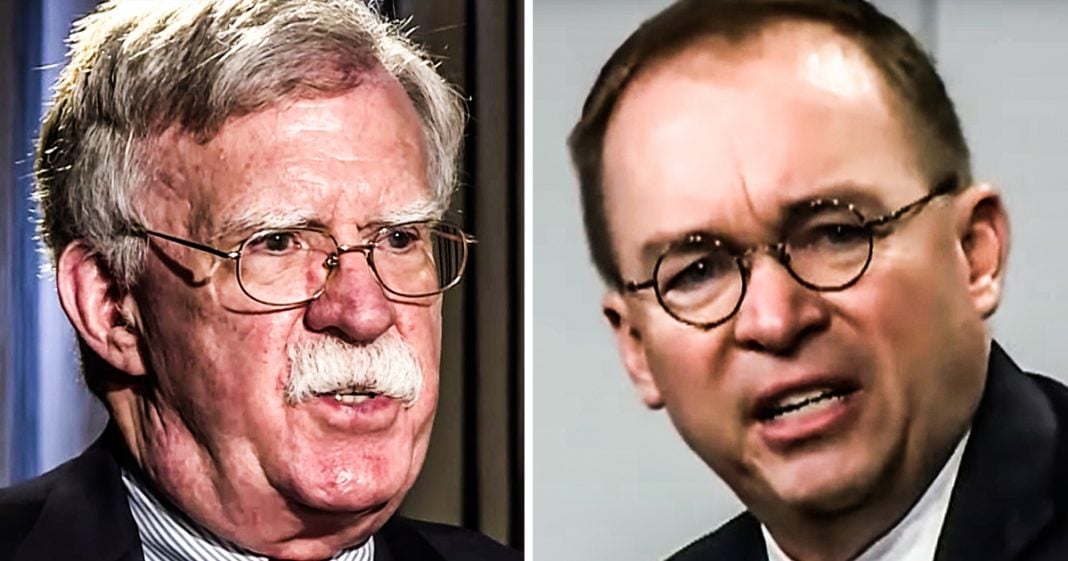 New reports claim that acting Chief of Staff Mick Mulvaney and former National Security Adviser John Bolton both urged Donald Trump to release the Ukraine aid package that sparked Trump’s impeachment, but the President wouldn’t listen to them. These men must be called to testify in a Senate trial if we want to know the truth about what has happened. If they don’t, Trump easily skates to victory on this issue. Ring of Fire’s Farron Cousins explains what’s happening.

So there’s quite a lot of interesting developments that have happened over the last couple of weeks with the whole Ukraine story. And one of those as reported by the New York Times just a couple of days ago was that acting chief of staff, Mick Mulvaney at Donald Trump’s request attempted to actually freeze the military aid package headed over to Ukraine in early June, long before the president’s phone call with president Zelensky ever took place. Mick Mulvaney was already working behind the scenes on Donald Trump’s little pet project to freeze that military aid. The Times also reported that a group of Trump advisers, including former national security advisor, John Bolton, and current secretary of state Pompeo, oh, I’m sorry. He’s not secretary of state. But anyway, Mike Pompeo also came out there. Oh, he is secretary of state. I don’t know why I thought he wasn’t, but anyway. You had Pompeo, you had Bolton and then you had defense secretary, Esper, in August after the phone call took place begging the president to release that aid.

They said, what you’re doing is wrong. We can’t do this. What you’re doing could potentially be illegal according to this Times report. You’ve got to release this aid, and Donald Trump said no. And then of course the public finds out about it. We get the whistleblower complaint and we learned that all this is happening. And so suddenly Donald Trump says, okay, maybe you guys are right. I’m going to release part of the aid. By the way, still hasn’t released all of it. And I think that’s part of the story that continues to be overlooked. Not all of the aid has even been released yet, folks. It was supposed to have been, but it’s not. So here’s what needs to happen. The public needs to hear from both Mick Mulvaney about what he did and John Bolton about what happened. These two men together hold the keys that could either destroy the Trump administration or let Donald Trump skate through this.

And this is one of the reasons why I’m so furious that the Democrats rushed through this impeachment and the reason they rushed through it, the reason they didn’t force Mick Mulvaney to come testify is because one, Donald Trump obviously said, no, he’s not going to comply with a subpoena. But two, the Democrats didn’t want to get caught up in a lengthy court battle. They wanted to make this go quick. Right? We’ve got an election coming up in just a few months now, folks, 11 months, but still, that’s a short time in the world of politics and they wanted it to go pretty quickly. And they screwed the pooch on it. They could have fought it in court. They could have asked for this to be expedited given the severity of this. They could have had Mick Mulvaney come and testify or go to jail, but they didn’t. Same thing with Bolton. The only chance we have left is if these two men are called as witnesses in the Senate impeachment trial, which likely isn’t going to happen. McConnell’s made it clear that he does not want to call witnesses, and therefore Pelosi has not yet released the articles over to the Senate, so they can’t even start a trial yet. Meanwhile, we’re having to find everything out from reporters, from whistleblowers, and from any other source we can get about the extent of the criminal activity in this White House because the Democrats rushed through it, so we don’t get to hear from the criminals themselves.