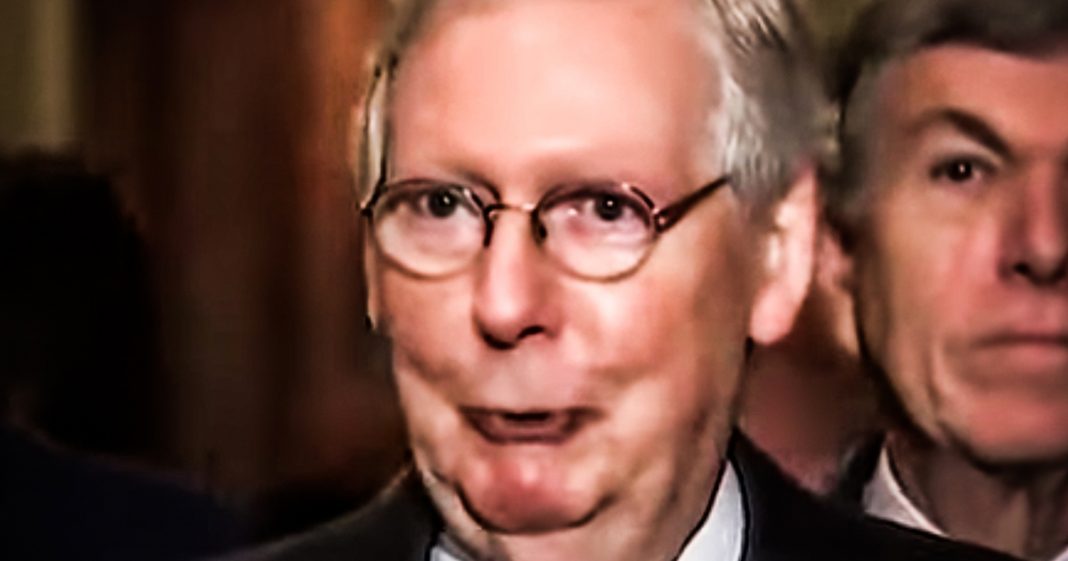 Mitch McConnell managed to sneak in nearly $1 billion in federal spending for his home state of Kentucky into the two budget bills passed at the end of the year. This money is akin to a bribe by the Republican Senator who is universally hated outside of his state and is facing a tight race for reelection. Ring of Fire’s Farron Cousins explains McConnell’s plans and why it might not be enough to save his job.

*This transcript was generated by a third-party transcription software company, so please excuse any typos.
Mitch McConnell was facing a very tough reelection campaign in his home state of Kentucky, not just because of his protection of Donald Trump, but also because he really hasn’t done a single thing recently, not just for people in Kentucky, but for anyone in this country. You know, a year or so ago, he proclaimed himself the Grim Reaper of any kind of democratic legislation, and he has lived up to that moniker in the last 12 months and his constituents back home aren’t happy about it. He is rocking a 34% approval rating in his home state of Kentucky. So what can the guy like Mitch McConnell do, right? You gotta get people to vote for you in your home state. This isn’t a national election, it’s a state one. Mitch McConnell came up with a good plan. Recently, Congress passed two different spending bills and Mitch McConnell decided he was going to sneak in a little gift for his home state of Kentucky. Gifts in the two spending bills that amount to $914 million in federal spending and tax cuts going straight and only to his state of Kentucky. Nearly $1 billion in giveaways to the residents of Kentucky’s, Kentucky. Excuse me. It’s a bribe. That’s what this is. This is a bribe. This is Mitch McConnell sneaking in $1 billion worth of bribes for people in Kentucky. In fact, he even said at a rally last week, I was directly responsible, directly responsible for these items, letting people know that it was him and him alone who got you $1 billion in both spending and tax cuts because he just cares so dang much about his home state. Now forget for a second that obviously, you know the time the coal miners took a bus to DC from Kentucky to say, Hey, we’re dying of black lung. You’re not funding the black lung program. Could you maybe talk to us? And he ignored them, sent them back on their bus and they left without ever getting to talk to him. And I bring that up because here are some of the items that Mitch McConnell has earmarked for Kentucky, a 410 million for the construction of the new Rob Lee Rex veterans affairs medical center in Louisville. $314 million for a cleanup of, uh, the gaseous diffusion plant. A 40 million increase over last year’s funding level, a tax break for spirit distillers worth an estimated 426 million next year alone and 65 million for the construction of the forage animal production lab. Um, he is also including a little bit of an increase in coal miners pension benefits. So yeah, I know you’re dying a black lung and I didn’t want to talk to you, but now I actually need your vote, so I’m going to up your pension a little bit. You know, please don’t die from black lung before the 2020 election, so you can vote for me. He also secured a tax break for Kentucky thoroughbred horse racing industry. So rich people, um, 16.5 million for the department of agriculture to implement the pro hemp provisions. Mitch McConnell got into the 2018 farm bill and 61.3 million for new military construction projects at Fort Campbell. So he’s feeding the military industrial complex. He’s giving tax cuts to rich people. He’s given a little bit of money to coal miners and their pension, and he’s building a, you know, horse stuff, I guess. I don’t know. I don’t see how most of this benefits average people living in the state of Kentucky. Yeah. You’ve got the Kentucky Derby. Fantastic. Is that worth millions in tax breaks for people to breed thoroughbred horses? Does that help the person dying of black lung? Mitch, I hope this backfires on you spectacularly. I hope all of this money ends up being a total waste and that the residents of Kentucky votes you out. And I hope that they understand that this is exactly what I said it was. This is a bribe by a desperate Congressman Senator, who’s just trying to keep his job alive and he doesn’t deserve it. And the people of Kentucky deserve a heck of a lot better than Senator Mitch McConnell.