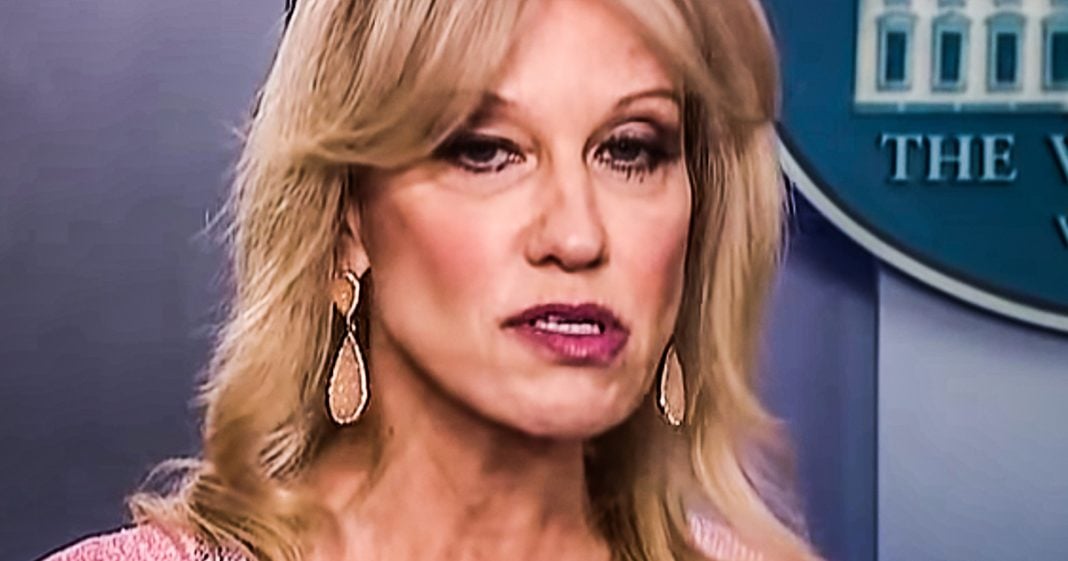 A lawsuit filed against the Office Of Special Counsel seeks the removal of Kellyanne Conway from the Trump administration. According to the lawsuit, Conway has repeatedly broken several laws while in office, and most of these instances have been confirmed by the OSC, with the OSC going as far as recommending her expulsion from the administration. Ring of Fire’s Farron Cousins explains the lawsuit and reminds everyone about Conway’s nonstop rule breaking.

*This transcript was generated by a third-party transcription software company, so please excuse any typos.
Not only as Kellyanne Conway been Donald Trump’s best defender out of everyone in this administration, she has also been the one who has broken the law more than anyone else and that includes Donald Trump himself. But according to a recent lawsuit filed by citizens for responsibility and ethics in Washington Crew, they believe that the office of special counsel who has in fact actually recommended Kellyanne Conway for expulsion from the administration, Crew was arguing in this new lawsuit that the OSC has not in fact done their due diligence with all of the crimes that they’ve confirmed Conway has committed. Here’s a little bit from the lawsuit. Since her appointment, she has openly violated the hatch act no fewer than 60 times and counting. She has done so by using her official white house position to influence the 2017 special election, the 2018 midterms and the 2020 presidential election through press appearances on- and social media. Many of those 60 alleged violations have been confirmed by the office of special counsel in the June, 2019 report, which the OSC issued in response to complaints by Crew. The agency deemed Conway’s violations so egregious that they warranted the disciplinary action of her removal from federal service. Now, if this were somebody who had been confirmed by the Senate, the OSC wouldn’t necessarily have as much control over the person, but since this is somebody who was just straight up hired by the administration, didn’t have to go through any kind of confirmation, they do have a lot of control over whether or not this person is hired or fired. So in the lawsuit Crew goes on to explain that there is a process that has to take place. When the office of special counsel finds that somebody has broken the law or broken the rules, it is up to the OSC to then send those over to the merit systems protection board. They didn’t do that at all for Kellyanne Conway. Instead they sent a letter to the white house saying, Hey, Kellyanne keeps breaking the law. We think she should be fired, but, I don’t know, it’s up to you. They didn’t file the complaint with the merit systems protection board and that’s what this lawsuit is all about. That’s part of their job. That’s part of their duty. They have to do this, they have to go file the official complaint with the board. And the board then gets to make the determination about what happens to Kellyanne Conway. Does she stay or does she go? And that’s what the OSC refused to do or failed to do however you want to phrase it. But the truth is that the office of special counsel had a job to do. They were supposed to do their due diligence on the Kellyanne Conway issue, 60 violations of the hatch act that they had confirmed even they thought she should have been removed. And all they had to do was follow the proper procedure and they probably could have made it happen, but they didn’t. They protected her, they protected her by sending a milk toast letter over to the president of the United States saying, Hey Kelly, Ann’s pretty bad Apple. You know, if you want to get rid of her, we’re totally going to support that. And Crew says that’s not good enough. But more importantly, you didn’t do your job. So all we’re asking with this lawsuit, office of special counsel is do your job, because if you do it right, we may finally rid ourselves of Kellyanne Conway for good.