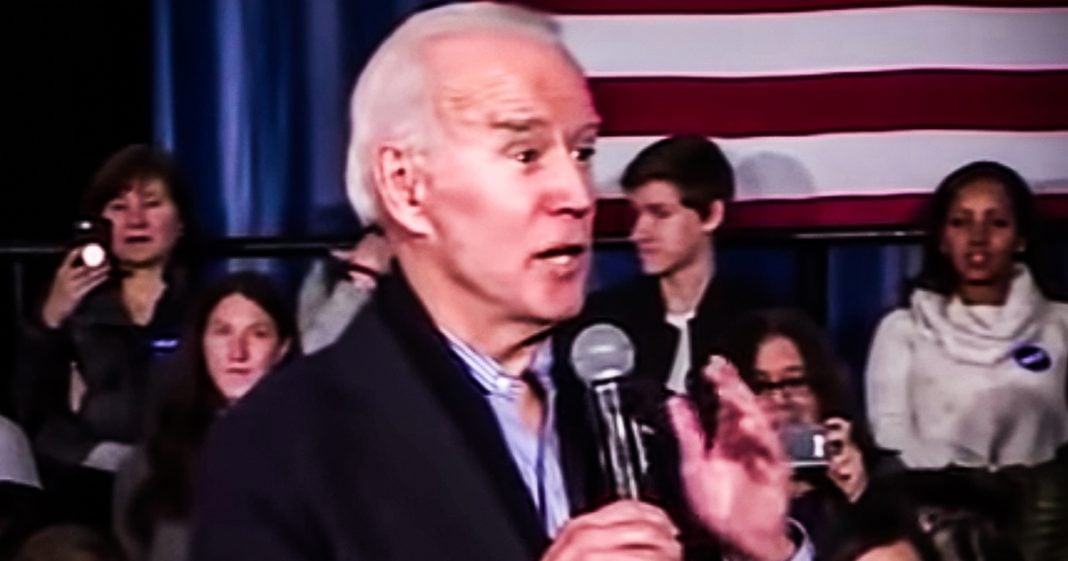 Joe Biden is a horrible candidate with bad policies and zero likelihood of beating Donald Trump. But in the past week, two different smears against Biden have emerged that both proved to be completely false. If we want to defeat Biden in the primaries, we have to focus on policy, not on baseless smears and out-of-context video clips. Ring of Fire’s Farron Cousins explains what’s happening.

For the last several days, there’s been lots of stories going around about Joe Biden, video clips showing how horrible Joe Biden is, and I think it’s time we clear the air. First and foremost, I am not a fan of Joe Biden. Anybody who watches this channel regularly knows that I do not like Joe Biden and I have said couple of weeks ago after he mocked the heavyset gentleman who trolled him, that I probably wouldn’t vote for Joe Biden no matter what. As of this moment, I still stand by that. But at the same time, I’m also a huge fan of debunking disinformation and right now there’s a lot of Joe Biden stuff that needs to be debunked. First and foremost, the clip that’s going around the internet, right? Joe Biden talking at this little group of people on December 30th where he goes off in this weird diatribe about our white European heritage. Now that clip went all over the place yesterday. People were saying, oh my God, he’s, he’s dabbling in white nationalism because that’s what the clip made it seem like. Only to find out the full clip, which this part was just clipped from, so it made him seem bad. The full clip showed that Joe Biden was actually talking about oppression of women and who was doing it.

He was saying it’s, it’s not the African Americans who are doing it. It’s not Latinos who are doing it. It’s the white people in the United States that are oppressing women so badly. It was actually a good statement. It was weird still the way he said it, but his heart was in the right place. Kind of like with most of the stupid things Biden says, he said it weirdly and stupidly, but you know, his heart, I guess was in the right place. So that’s been debunked. A lot of people who shared it on Twitter unfortunately had to go back and apologize for it and say, oops, I didn’t know. I didn’t realize this was just a part of a clip. I am sorry. So a lot of people fall for that. I fell for it until, of course we saw it in broader context. Still weird, but he wasn’t dabbling in white nationalism. The other thing, Joe Biden the other day allegedly saying, heck yeah, I’d run with a Republican.

That’s actually not exactly what happened. Another thing taken out of context. What happened was on Monday, Joe Biden was doing a rally. Woman raised her hand and asked him a question, and says the following, says, our 21 year old son said the other night, I wonder if Joe Biden would consider choosing a Republican as a running mate. Biden responded by saying, the answer is I would, but I can’t think of one now. Let me explain that. You know, there’s some really decent Republicans that are out there still, but here’s the problem right now, they’ve got to step up. This wasn’t Joe Biden saying, hey, yeah, I would absolutely consider that. It was him saying, yeah, I’d consider one if there was a decent Republican left in this country.

Now I don’t trust Joe Biden. I wouldn’t put it past Joe Biden to choose a Republican as a running mate. But the headlines of Biden says he’d pick a Republican running mate. Those are not true. Again, I don’t like Joe Biden and I’m forced to sit here and defend him because of all of the misinformation that’s going around right now, and it’s going around because people are too lazy right now. So willing to jump on any dirt on Joe Biden because we all despise him, that we’re not doing our homework. We’re not following through with it. We’re not following up on it. We’re not reading for more context and we have to get better. You want to attack Joe Biden, attack him on his policies. Those are God awful. Attack him for his very obvious cognitive decline. That’s visible, we can see him mentally deteriorating before our eyes, just like Donald Trump. Those are things to go after him for, his past voting record, absolutely fair game. But don’t jump on a clip on the internet. Don’t jump on just one arrant headline because they didn’t provide the full context. If you want to go after Joe Biden, do it on policy, not on a viral tweet.