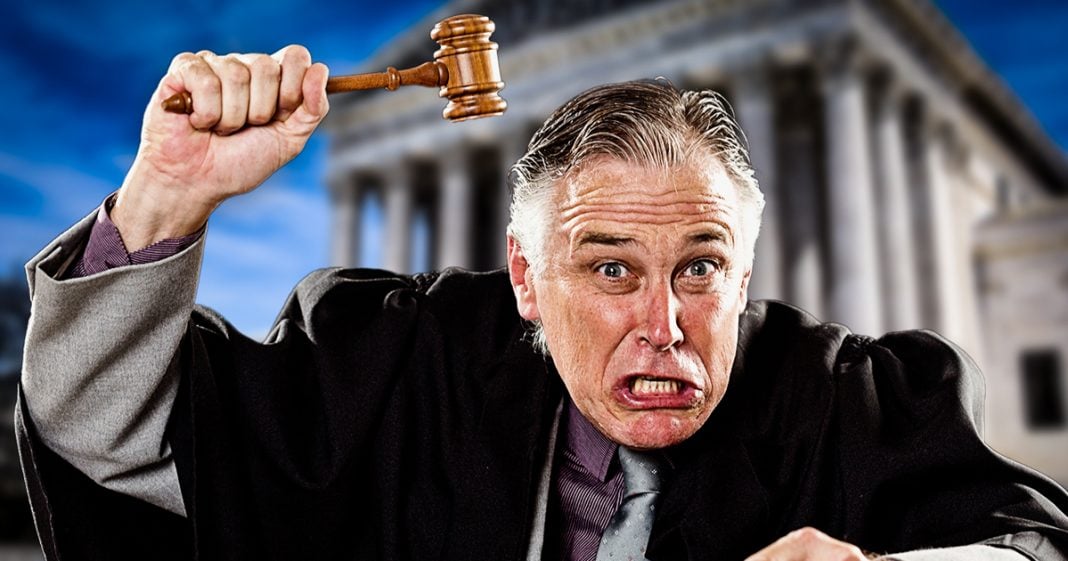 Democratic candidates, for the most part, have outlined all sorts of plans to address some of the biggest problems in this country, but one issue that hasn’t been clearly addressed is how to fix the courts. Trump has appointed 187 judges to lifetime appointments all over the country, and that is damage that will last for generations. Ring of Fire’s Farron Cousins explains what has to be done to reverse Trump’s actions.

*This transcript was generated by a third-party transcription software company, so please excuse any typos.
Recently, former Senate majority leader, Harry Reid, the Democrat that used to run things in the Senate back when Democrats had the majority before he retired just a couple of years ago, actually pinned in op-ed where he finally pointed out something that was correct in that is that Democrats need to come up with a plan on how they’re going to take back the court system from Donald Trump. As it stands right now, as up to this day, Donald Trump has appointed 187 lifetime judges to courts all over this country, including the two he’s got on the Supreme court. So minus the Supreme court, which seems to be all Democrats ever want to talk about. There’s 185 judges out there who will be on those benches till they either die or retire. That Donald Trump, with the help of Mitch McConnell, got approved and appointed. And Harry Reed is right. Democrats have to have a plan on how to deal with that. This is a generational change that Donald Trump has made to the court system. He has put people in power that have been rated as not qualified by the ABA. He has put people in there who are younger than me and I’m technically a millennial, but they’re younger than me. They’ve tried as many cases as me, which is zero because I’m not a lawyer. So I would have just as much legal experience as they do doing nothing more than being the editor of the trial lawyer magazine. And that’s not a qualification. I would make a horrible judge just like these people have, but they’re there for the rest of their life. And yeah, Democrats have to have a plan for this. You can’t just come in and say, well, I’m going to appoint some, you know, liberal judges, because we all know what liberal judges mean. For most corporate Democrats, it means a judge that’s going to give you what you want on social issues, but they’re going to vote with corporations majority of the time they’re going to vote against environmental protections, against worker protections, against consumer protections. But there’ll be great on social issues. So that tends to be okay for Democrats. I mean heck, Barack Obama had his own overtime rule that would have extended overtime paid to millions of workers. He had it over tore- overturned by his own corporate judicial pick. That’s how bad Democrats are when it comes to appointing judges. So not only do they need a plan to counter all of these corporate friendly Republican judges, but they need a plan to find better judges in general cause they’re getting screwed over by their own folks. Here is my suggestion. Term limits. No one in this country should ever receive a lifetime appointment to anything at all, ever. No matter what it is. Lifetime appointments, especially for federal government should not exist. It concentrates too much power into these individual people and isn’t that exactly what the founding fathers feared? They didn’t want Kings yet. If you have somebody who’s got a 30 year seniority on a court bench, it’s essentially a King in that area, right? They get to make the rules. Majority of cases in this country, tens of thousands of them every year do not go to the Supreme Court. They’re decided on those appellate courts and that’s the final word. Those are Kings. Those are miniature Kings and Queens in the making, and that’s what the founding fathers warned us about. Term limits is the only way to fix that. Term limits is the only way to prevent these very young, not qualified judges that Trump has put in power from having 30 to 40 years to destroy any progress that liberals may make in this country and get rid of some of those pro corporate Democrat judges that are also out there. Because again, a lot of those democratic justices are not very good either. We need real radical structural reform to the judiciary. Anything short of that is just a big gift for corporations.