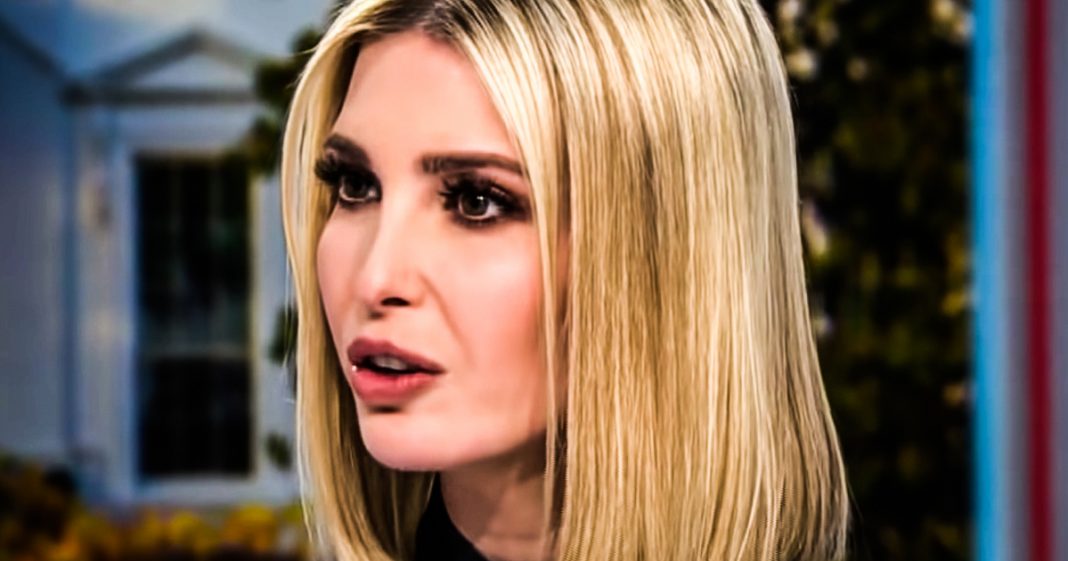 Donald Trump’s reelection campaign understands that he has a very tough road to victory in 2020, so they are preparing to unleash their secret weapon: Ivanka Trump. The campaign believes that Ivanka can reach out and connect with suburban women who are turned off by her father and bring them back into the fold. Ring of Fire’s Farron Cousins explains how this plan could work and how it could absolutely backfire.

*This transcript was generated by a third-party transcription software company, so please excuse any typos.
According to a report from the Washington post this week, Donald Trump has finally admitted to his advisers in his 2020 reelection campaign that people don’t like him. He has finally understood that those poll numbers showing that people don’t like him are real, but never one to let the polls get to him, of course. Trump and his campaign have come up with a plan B, see they know that Donald Trump can’t go out there and win back the, uh, suburban white mom vote, right? He’s not going to get women in general. He’s not going to get people of color here in the United States. He’s not going to get, you know, anybody in enough numbers to give him the 2020 presidential election. So they’re unveiling their secret weapon and they’re going to send that secret weapon out to wreak havoc all over this country. And that secret weapon according to the report, is Ivanka Trump. Ivanka Trump is the one that they believe they can send out there to convince the suburban women, the people of color and everybody else out there that, Hey, yeah, my dad may be abrasive. He may say some horrible things, but deep down, you know, he’s still doing the right thing. He’s still a good guy with good policies that have benefited each and every one of you, is what they want Ivanka to go out and say, but there’s a catch. There’s a catch to their plan. And it only works if everybody she talks to is absolutely dumb as a rock because see, here’s the thing, it’s not just that Donald Trump is hugely abrasive and just hard to stomach. It’s not that Ivanka being a little bit sweeter would help sell these horrible policies. It’s the fact that the policies themselves are not actually helping average American citizens. You know, there were a lot of things that played a role in Donald Trump’s election and I don’t want to get into all of them right now, but we know what they are, right? We, we’ve seen the, you know, Tiki torch, khaki pants rallies. We’ve, we’ve, we’ve seen what other foreign countries have said and done around here. But, uh, the biggest reason Donald Trump won the 2020 election, all the other bull crap aside is because people actually thought he was going to bring change. People actually thought he was going to do something that was going to help their lives. They got hoodwinked as people typically do from politicians on both sides of the aisle. But that is what propelled him to the victory. Yes, everything else played a small role as well, some bigger than others. But at the end of the day, it was him going out there holding all these rallies, talking to all of these people saying, I’m going to make your life better. I’m going to get rid of the horrible things, you know, NAFTA. But he’s now replacing them with something just as bad. We’re going to bring back the jobs, we’re going to bring back the income, we’re going to bring back all of these things that you used to have. That’s good campaigning. If you follow through on it and the president didn’t, and the people understand that. So it doesn’t matter if it’s Trump going out there saying it. If it’s Ivanka going out there saying it, or even if it’s Eric or Don jr or Milania or even Baron going out there and saying it, it doesn’t matter at this point who it comes from. When people can look at their paycheck and see they aren’t better off, that’s the kicker. So they can unleash their secret weapon Ivanka Trump if they want, but at the end of the day, these voters, average American citizens, understand that their lives have not gotten any better and they’re going to want something better come 2020.