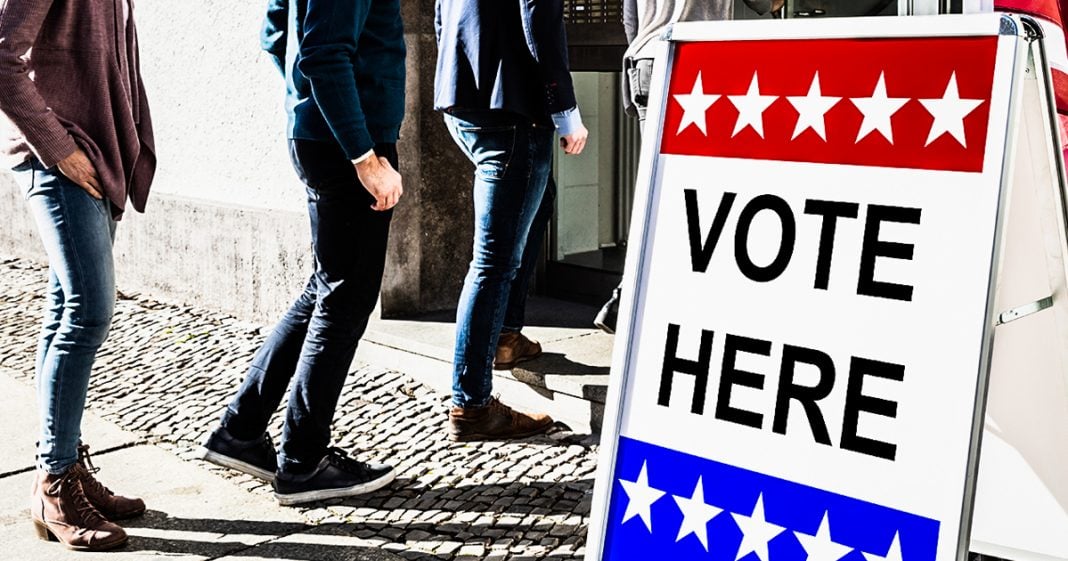 Late last week, a federal judge allowed Georgia’s massive voter purge to continue, approving nearly 100,000 names for purging. These are the names of people who have been classified as “inactive” in the state, which should have absolutely no bearing on whether or not a person is eligible to vote. This is voter suppression in its purest form, and it is being done to help Republicans. Ring of Fire’s Farron Cousins discusses this.

*This transcript was generated by a third-party transcription software company, so please excuse any typos.
This past Friday, a federal judge in the state of Georgia ruled that the 98,000 people that the state has purged from their voter rolls because they were allegedly inactive, can totally stay purged. Now, this lawsuit was filed by an activist group called a fair fight action that was just seeking to restore these people to the voting roles because they’re still human beings. They’re still American citizens who have the right to vote. They still exist and they should absolutely still be on the voting rolls, but the federal judge decided, no, no, I am going to let this purge continue, but this is what the judge expressed, that it has a serious concern that there needs to be an immediate and accurate interpretation by the state court of HB-316, now, HB-316 is the house bill, obviously, that allows for the purging of inactive voters. So even though the judge says, ah, I don’t know about this bill, this seems like it could be inaccurate, but I’m not going to do anything about it. You, you have the authority to do something about it. You could’ve stopped it. You could have said, let’s stop it. At least for now, while we get that accurate interpretation of HB-316 but no, you federal judge said, you know what, keep purging. Just get them all out of here and then we’ll sort it out later. You know, shoot first, ask questions later that that’s what this judge said. So 98,000 people who still exist and are legally allowed to vote in the state of Georgia just get purged. It’s now up to them to not only find out if in fact they were purged, but how to get back on those voting rolls. But here’s the whole thing about this. First and foremost, this is Republican voter suppression at its finest. 98,000 voters in the state of Georgia is more than enough to swing the next election and they know it. And that’s why 98,000 is not the number they’re stopping that they’re going for about 300,000 in fact, they’ve aimed 3000 people, 300,000 people, excuse me, to be purged, but they’re doing it in what should be considered illegal. Just because you haven’t voted in the last couple elections does not mean you’ve lost your right to vote. Does not mean you are not eligible to vote, and it doesn’t mean that you don’t exist anymore. You’re still a human being, an American citizen who has those rights, but they’re taking those rights away from you because you didn’t vote last time. Maybe something happened. Maybe you have exceptionally bad luck to where the last two election cycles you ended up in the hospital, unforeseen circumstances, or you ended up suddenly having to travel for business. Something came up. Maybe your car broke down that day. Maybe you just had to work a later shift and you simply couldn’t get out, common. And the state of Georgia says, no, you didn’t participate. So we’re taking away your God given right as an American citizen to vote, but we’re not actually doing it because you’re inactive. We’re doing it to protect our Republican majorities.