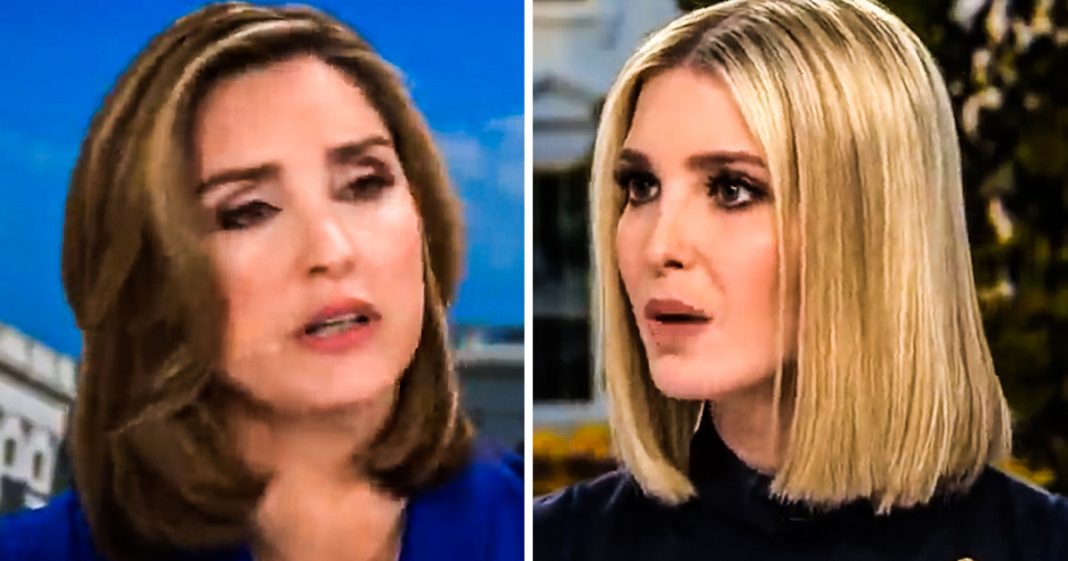 During a ridiculously easy interview on CBS, Ivanka Trump was asked if she still opposed her father’s migrant family separation policy, and Ivanka gave a rambling diatribe about how we have to stop human trafficking and how immigration isn’t really part of her “portfolio.” She was allowed to escape the actual issue, and this kind of journalistic malpractice is how we ended up with Trump in the first place. Ring of Fire’s Farron Cousins discusses this.

*This transcript was generated by a third-party transcription software company, so please excuse any typos.
On Sunday morning, Ivanka Trump appeared on CBS to answer what might be the most softball questions we have ever seen, asked of anyone in the Trump family. But in spite of the fact that this was a very soft interview. Ivanka still couldn’t quite answer questions, danced around the issues, and then somehow managed to redirect the question into an area that the question didn’t even cover. Here’s what I mean [nouration the most important resource and in this country. Um, and, and of course, um, the parents, it doesn’t stop at 12 weeks whenever anyone hears you talk about the importance of being with your children. They also think about your personal, uh, and you were vocal in your opposition to the family separation policy when it came to immigration and the US border. You said that was a low point for you. Correct. Um, we went and looked and Homeland security says there are still around 900 children who remain separated from their families. Is that something you continue to remain engaged on when it comes to immigration? Well, immigration is not part of my portfolio, obviously. Um, I think everyone should be engaged. And the full force of the US government is committed to this effort to border security, um, to protecting the most vulnerable that includes those being trafficked, um, across our border, which this precedent has committed to countering and combating human trafficking in an incredibly comprehensive, aggressive way. So the, the full United States government has been focused on this issue starting with the president Ivanka Trump.] Now, that was absolutely remarkable. Every facet of that little exchange right there, remarkable. Because not only was that a BS question to begin with, you know, prompting it is, we know you’ve been against this, you know how, how are you still fighting kids? This, what are you doing? And then her say, why is not really part of my portfolio here? Portfolio? What the hell does that even mean? Not part of your portfolio, right? You’re not going into a business meeting trying to land a new contract for a new building you want to erect. These are children separated from their parents and locked in cages by your dad’s policies, Ivanka. And guess what folks, no, this has nothing to do with stopping human trafficking. Nothing. Because we know from the administration’s own documents, I think everybody forgot that those documents were released like six months ago. No, we found out that they enacted this policy because they thought it would be a good deterrent. That’s in the department of Homeland security emails that the house of representatives got their hands on. We can see those emails. They exist. They are real and Trump wanted to do it because he thought it would be a good deterrent thought it would prevent people from coming across the border. Ivanka, nowhere in there does your daddy say that we have to stop human trafficking and maybe these parents are bringing somebody else’s kids across the border. Maybe they’re trafficking them. They’re going to sell them into slavery here in the United States, but that’s not what this is about and the interviewer is probably even more disgusting than Ivanka Trump is right there because it’s this kind of lazy media malpractice that absolutely allowed Donald Trump to become president. Now, perhaps this was a condition under which Ivanka agreed to come on CBS. No tough questions or maybe even give us the questions in advance so that she can craft her responses to it. We’ve seen that happen plenty of times. People both on the left and right. We want the questions in advance. We want to be prepared. No gotcha questions. No, you know, trying to get us, uh, backed into a corner, not gonna happen. I, I’m assuming that that were the condition. That was one of the conditions under which Ivanka agreed to do this interview. But guess what? Once you got her in that chair, you got a captive audience. What is she going to do? Get pissed off, rip her mike off and walk off stage. Fantastic. That means more viewers for you, but you can’t go through like this. You can’t interview people like this, especially when they refuse to answer the questions just because they don’t want to. You allowed Ivanka Trump to take a very serious issue, tie it into another very serious but unrelated issue. And then immediately after that you said Ivanka Trump, thank you very much. And that was the end.