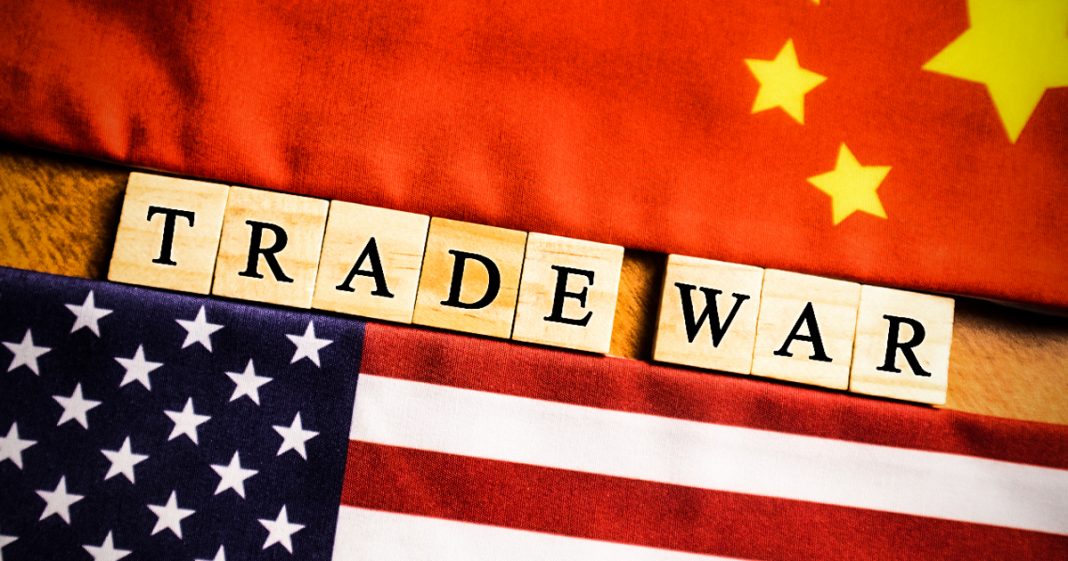 According to a new study by the Federal Reserve, Donald Trump’s tariffs and trade war with China have not only been a complete failure, they actually backfired on the President and the American people. Americans are now paying several billion dollars PER MONTH in additional costs, and the President has no plan whatsoever on how to end this ridiculous trade war. Ring of Fire’s Farron Cousins discusses this.

*This transcript was generated by a third-party transcription software company, so please excuse any typos.
In what should come as a surprise to absolutely nobody in this country. The federal reserve has released a study saying that, oops, Donald Trump’s trade war and all the tariffs on the goods from China have actually backfired, and it’s the American public who is paying the price, not just in the price of the goods we purchase, but also with our jobs. Yes, the federal reserve itself has admitted that Donald Trump’s trade war with China has cost us jobs here in the United States, as well as cost American citizens billions of dollars per month in additional costs. Now, again, this is not surprising. This is what every single report on the issue of tariffs and the trade war has told us since Donald Trump started this. But these are the kinds of stories that we have to hammer. These are the kinds of stories that have to be discussed because the rest of the public needs to understand exactly what’s happening. No matter how many times Donald Trump tweets out that, Oh, the tariffs are really hurting China. We’re doing great here. That doesn’t make it true. And now the federal government’s own report admits that this is not true. We have lost thousands of jobs in this country because of the trade war. We are paying upwards of $7 billion per month as consumers because of the trade war. And a lot of the focus on the tariffs has been on the farming community, you know, agricultural goods. But according to this study, a lot of the goods that we’re getting screwed on have nothing to do with agriculture. Here are the top 10 industries that have been hit with these tariffs. Uh, producers of magnetic and optical media, leather goods, aluminum sheet, iron and steel, motor vehicles, household appliances, saw mills, audio and video equipment, pesticide and computer equipment. So those are the top 10 industries that China has put retaliatory tariffs on for us here in the United States. So we’re paying more for those items. We’re bailing out farmers with billions of dollars. That’s not even going to the actual struggling farmers. It’s going to the big factory farmers. So we’re losing money hand over fist, left and right, no matter what we’re purchasing, even if we buy American, because as we have explained, as studies have shown, even goods made right here in America with no goods that have been tariffed have raised their prices so that they stay competitive with the ones who’ve had to raise their prices because they got tariffed. We are getting screwed. And this is what I want the presidential candidates to start talking more about. I want them to go out there and talk about this federal reserve study. I want them to talk about all of the other studies too. I want them to go and explain to people in the rust belt that Donald Trump personally and single handedly is screwing them out of billions of dollars and thousands of jobs because that is the God’s honest truth according to the federal government themselves. And that’s what the candidates need to be talking about. Because here’s the thing, this isn’t a left or right issue. This isn’t a Democrat versus Republican issue. Donald Trump did this by himself. So if that’s the person you’re running against, this seems like one of the biggest positions to hit him on because it is absolutely one of the biggest failures that Donald Trump has enacted since he came in office and he did it without the help of anyone else, which just shows how incompetent and stupid the man truly is.