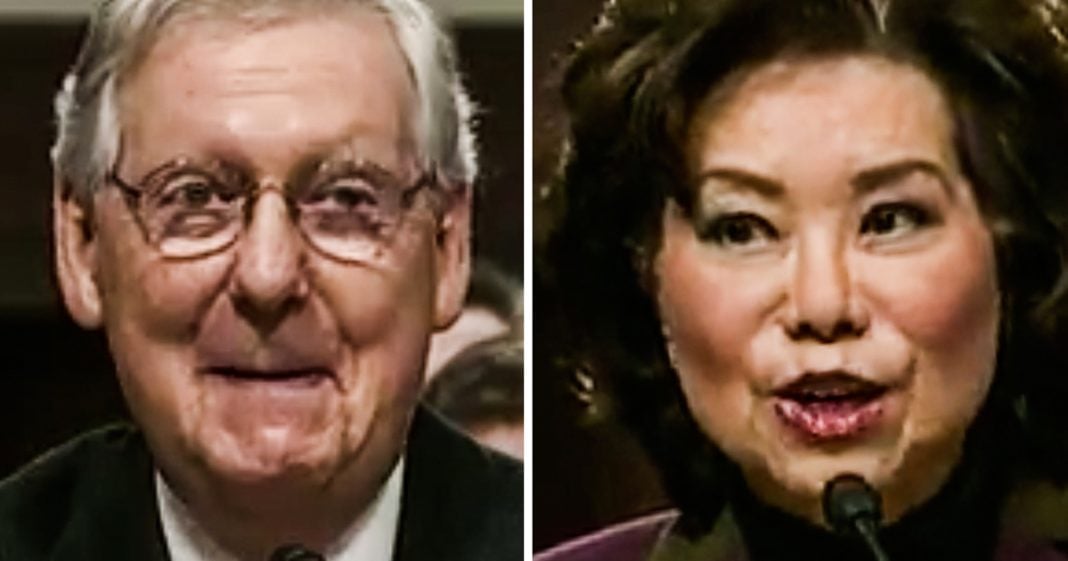 Transportation Secretary Elaine Chao has been caught red-handed steering yet another highly lucrative federal contract to a Kentucky company, presumably to help her husband Mitch McConnell’s reelection campaign. Chao is already under investigation for sending projects to Kentucky, frequently to McConnell’s donors, and her staff is helping contractors get a direct line to Chao herself. Ring of Fire’s Farron Cousins explains what’s happening.

*This transcript was generated by a third-party transcription software company, so please excuse any typos.
As it stands right now. Mitch McConnell, who is up for reelection in 2020 stands a decent chance of winning his reelection and staying the Senate majority leader for the Republicans, but the race is getting tighter. His democratic opponent is gaining steam, and the more the public in general outside of Kentucky focuses on Mitch McConnell, the more they hate him and rightfully so. There’s nothing likable about Mitch McConnell whatsoever, but his wife, transportation secretary Elaine Chao is doing everything she can to make sure that her husband does not lose his reelection, including something she recently got busted for, which was sending a $97 million contract, federal government contract, to a small company in Kentucky. Now, what’s interesting about this is that obviously there is plenty of evidence and an ongoing investigation into Chao because she has been using her position as secretary of transportation to steer tons of contracts that shouldn’t be going to companies in Kentucky to companies in Kentucky, and she tends to favor people in businesses who’ve given money to her husband. And as I mentioned, she’s under investigation for that right now. But Hey, that’s not going to stop her from keeping going, right? You gotta make sure hubby wins that election because if he loses, you kind of lose a lot of cloud and on the guy that had your back. And so then the investigators might really come after you and God knows what’s going to happen then. But let’s put it this way. Let’s put it real simple. Elaine Chao is corrupt as hell. Mitch McConnell is corrupt as hell. They are the perfect couple. They truly are made for each other because they’re just God awful human beings who have no respect for the offices that they hold all. But the story gets so much better here. This is from Politico. Um, there were 42 applicants for this $97 million contract who filled out their applications for it incorrectly, including the company that wanted it in Kentucky. 42 of them were allowed to go back and make these corrections, including this company 55 who screwed up their applications. Those were just thrown out. They didn’t get to go back and do it. So there’s already a little bit of favoritism happening there. But then emails obtained by Politico show that Boone County officials were in contact with Charles aid, Todd Inman, a former McConnell campaign staffer known to offer extra guidance to Kentuckian’s with business before the secretary. So you got a former McConnell staffer who’s now a staffer for his wife, who is in contact with companies in Kentucky, putting them directly to Elaine Chao and telling them how to get those contracts for Kentuck. Folks, I don’t know what the investigators are waiting for. Lock her up. We have all of the evidence we need. We have the emails obtained. The reporters have them, the house has them. They know what this woman has done. And my only hope is that the media starts paying attention to this because if they focus on her corruption, they have to focus on Mitch McConnell’s. And if the good people of Kentucky understand just how corrupt and deranged their ultimate power couple is, I guarantee you it’s the end of both of their careers.