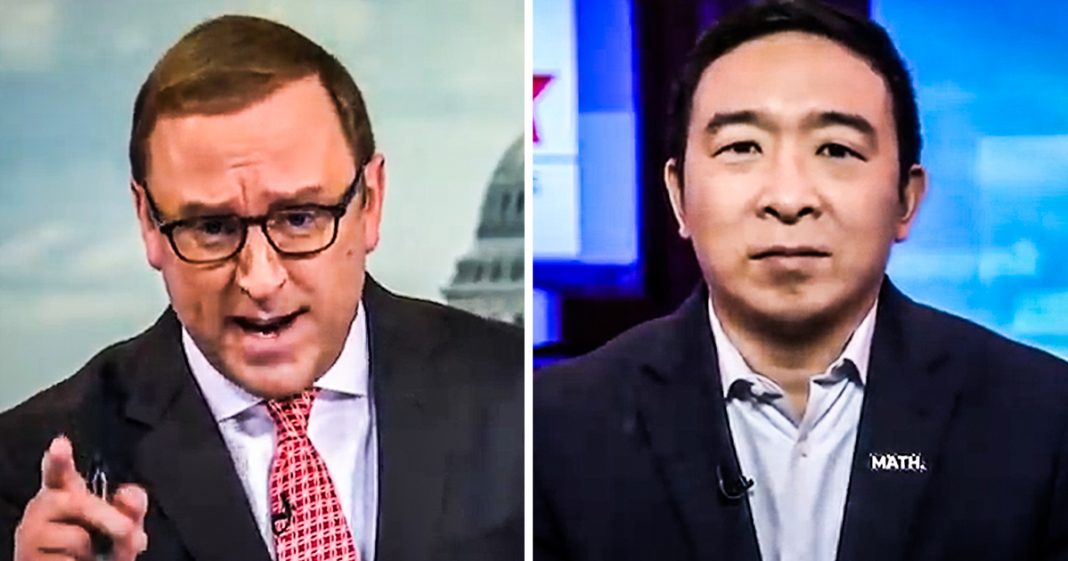 During an interview on ABC News this weekend, Presidential candidate Andrew Yang was asked why he’s calling his healthcare plan “Medicare for All” when the plan isn’t actually Medicare for All. In fact, it doesn’t even include a public option or any real mention of how he’ll extend coverage to all American citizens. Yang stumbled through his response, and that stumbling proved that he isn’t ready to answer the big questions or to be taken off script. Ring of Fire’s Farron Cousins discusses this.

*This transcript was generated by a third-party transcription software company, so please excuse any typos.
Over the weekend. Democratic presidential candidate, Andrew Yang, went on ABC news where he was asked about his healthcare plan and unfortunately for Andrew Yang it did not go the way that gang thought it would. Here it is [but um, again I’m confused. Your ad is explicit. Your ad says Medicare for all your plan is not Medicare for all. It’s not even Medicare for some because in your plan there’s, there’s not even a public option. Our plan is to expand a universal healthcare system to all Americans. Medicare for all is not the name of a bill. Medicare for all is universal healthcare for all Americans but Medicare for all is Medicare for all. Right? I mean well our, our health care plan would be would be based on Medicare and expanding it over time to more and more Americans. You lower the eligibility age and then you make it widely accessible. Okay. I I didn’t, I didn’t see that in in your plan.] Now to immediately correct something that Andrew Yang said their Medicare for all is not the name of the bill. Actually it is the Medicare for all act of 2019 that is the name of the bill Yang. It’s right there. That’s easy to look up so you’re totally wrong about that and you’re also wrong about calling your plan Medicare for all and I’m very glad that you got called out on it because your plan, which I just spent 30 minutes going through your entire website, nowhere in your plan does it call for Medicare for all, does it call for a public option or does it call for universal healthcare, yet your saying right there on TV that you in fact do support some kind of eventual Medicare for all, let’s work there. But again, because the yang people always say go to his website. So I went through his website folks, I read every effing word of it and it’s not there. It’s not. Here are a couple things that are there though. This is directly copied and pasted from Andrew Yang’s own website. We are having the wrong conversation on healthcare. Instead of addressing the underlying problems driving on affordability and access, we Democrats are spending all our time arguing over who is the most zealous in wanting to cover Americans over who has wanted to do so longer over who cares more about the health of Americans. We talk about how we’re going to pay for it, but the reality is we’re already paying for it. We pay for it when we can’t switch jobs, we pay for it when new jobs or temp or gig jobs that don’t provide healthcare, we pay for it when all of our prices are higher. We pay for it when healthcare costs drive us into bankruptcy. Now all of that part is true. He is absolutely correct about that and I like that assessment of it and then it gets stupid. To be clear, I support the spirit of Medicare for all and have since the first day of this campaign. I do believe that swiftly reformatting 18% of our economy and eliminating private insurance for millions of Americans is not a realistic strategy, so we need to provide a new way forward on healthcare for all Americans. Interesting statement, Mr. Yang. The problem is, as this goes on, as you link to your comprehensive healthcare plan on your website, nowhere, nowhere on that website do you explain how to get there. Now you go on and on about talking about the things that should be covered, mental health, and you’re right, HIV and AIDS, and you’re right. You know, all of these things you’re right about, they should be covered. And you’re right about, we’ve got to reduce the cost. You’re right and you don’t offer one solution on how to get there. Not one. And that’s what pisses me off. You have co-opted the title of Medicare for all because you, along with several other democratic candidates, think that, Oh well I can just call it this thing. And I guess that’s what it is now. Now listen, look, okay, I drive a Nissan. I can’t go around telling people that I drive a Maserati. And then when they look at my car and say, no dude, that’s a Nissan. I say, well, no, I, yeah, but I call it Maserati. It’s what I’ve named it. So you know, it’s kind of the same thing. No, a Nissan’s a Nissan, just like Medicare for all is Medicare for all. You don’t get to slap that label on the piece of crap policy that you’re pushing that offers a lot of truths, but not a single solution.