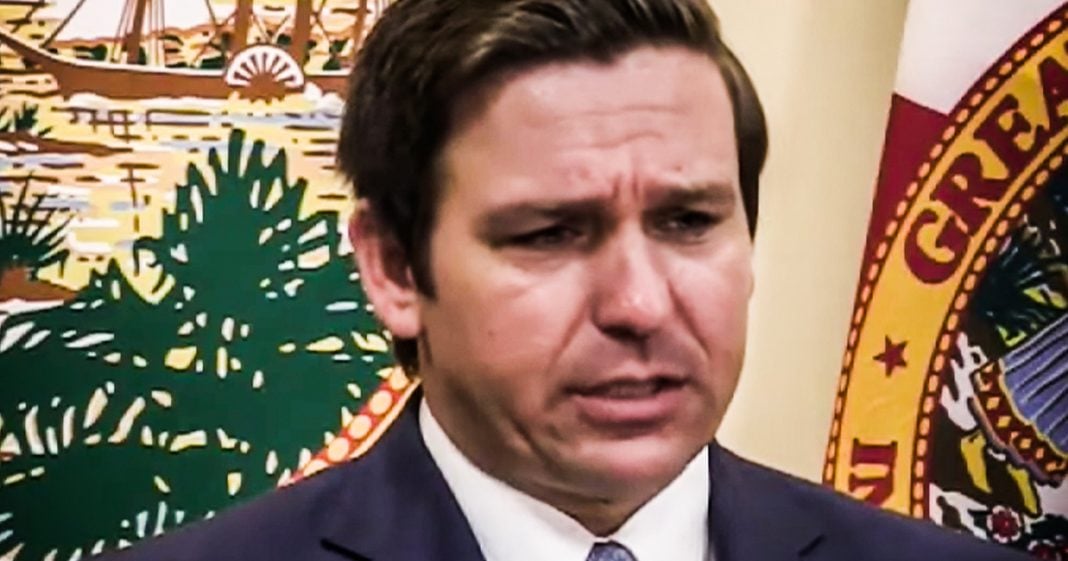 Republican politicians in Florida have been unhappy ever since Florida voters approved a measure last year giving former felons their right to vote back. After months of trying to prevent these people from being able to vote, Republicans are now planning on compiling a list of people they “believe” shouldn’t be given their rights back. We know exactly how this will end, because the state has been doing the same thing for 20 years. Ring of Fire’s Farron Cousins discusses this.

*This transcript was generated by a third-party transcription software company, so please excuse any typos.
Right now, the state of Wisconsin is working on purging 234,000 people from their voter rolls. The state of Georgia is working on purging 300,000 people from their voting roles, but the state of Florida is trying to outdo them all and the state of Florida wants to purge upwards of 1 million voters from the biggest swing state in the country, and they want to do it by overturning a popular amendment passed last year by Florida voters amendment four which gave felons their right to vote back after they finish serving their prison term. Now the Republicans who control every part of the state of Florida did try to basically undo the amendment. They weren’t able to do that, so they had to work around the work around was they instituted a poll tax and this poll tax said, if you are a former felon, you get your right to vote back, but only after you pay back all of your court costs, any kind of settlements or law suits, anything like that as well. If you owed money from your conviction and you haven’t paid it back then, I’m sorry. But this recently, a past past hugely popular voter initiative, amendment four doesn’t apply to you. You gotta pay us all that money. Well, a judge not that long ago in the state of Florida said you can’t do that. Republicans. And so Republicans then appealed it to the Republican controlled Supreme court in the state of Florida. And there’s very little doubt that these Republicans are going to say, Oh yes, you can do this. And besides, not that it matters anyway because Republicans in the state are already doing it. And here’s what they’ve said recently. They’re going through and they are trying to match up and find out which former felons actually still owe fines, which ones are not eligible to vote and which ones are eligible to vote. But here’s the problem. As they’re going through and doing this and marking people off saying, nope, you don’t qualify. It’s important to remember that the state has admitted that they don’t have any kind of database that says who still owes money. It doesn’t exist. So these few individuals at the Florida department of elections are having to go through court records with each individual court in every single city, every single County here in the state of Florida, matching names to court fines. Another problem with that is that a lot of names can be similar. You know, perhaps there’s somebody out there named James Smith who had to serve a little bit of time, while there’s probably very, a lot of James Smiths or similar names like that, maybe one of them paid off his fine, another one didn’t. Guess what the state will do. They’ll kick them both off the voting rolls and we know that because they’ve done that in the past. They did that in 2000 and in 2004 in 2008 and 2016 and they’re going to do it again. And they did it back then by saying, Oh no, I’m sorry, your name’s James Smith. Well, James Smith is a felon. You can’t vote. Okay, well you didn’t bother to check which James Smith was which, you just kicked us all off without checking. This is how the state operates. And they do it because there hasn’t been an election in the state of Florida since the 1990s that’s been decided by fewer than a couple tens of thousands of votes, and we’re talking about 1.4 million former felons that we’re about to get the right to vote back. There have been massive voter registration drives here in the state of Florida to get these former felons back on the voting rolls. And these activist organizations have come down here and they have done phenomenal work, and the Republicans that control the state have consistently, for the last 13 months, been trying to undo what the voters approved. They might get away with it. They may not. Unfortunately, we may not know until it’s too late.