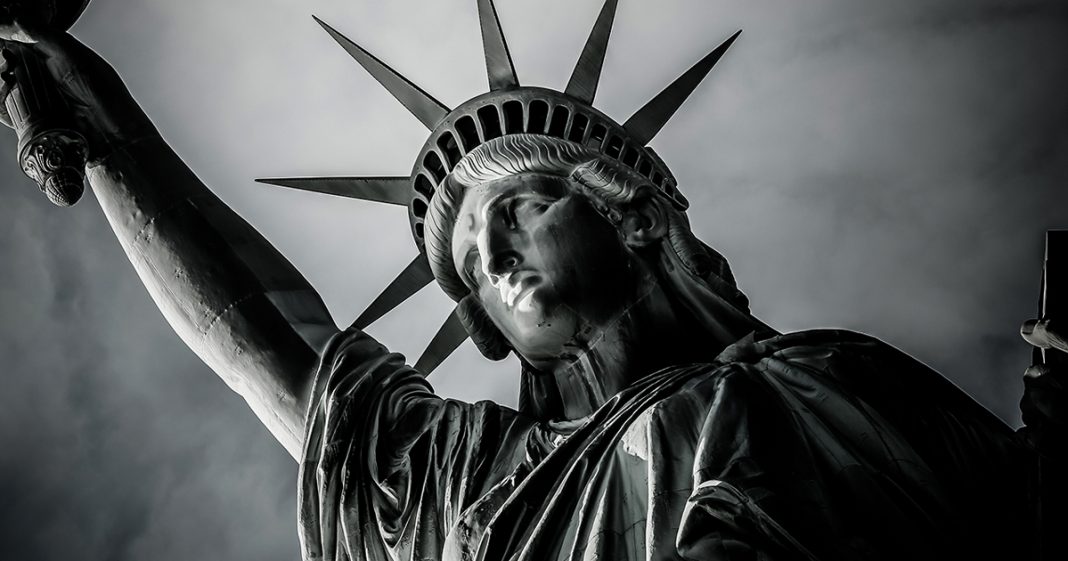 From Freedom of Speech to the Right to Equal Justice, the vast majority of Americans believe that our most basic rights as American citizens are under attack. Nearly all of the respondents in a recent poll said that the rights outlined in the Bill of Rights are being eroded, but only about half of the people polled said that they would miss those rights if they were gone. Ring of Fire’s Farron Cousins discusses this bizarre polling.

*This transcript was generated by a third-party transcription software company, so please excuse any typos.
According to a new poll, 92% of American citizens believe that their rights, specifically most of the rights given to them in the bill of rights of the United States constitution are under attack. Here’s the way it breaks down. 48% say the freedom of speech is under attack. 47% say the right to bear arms is under attack, the right to equal justice. 41% say it’s under attack. Freedom of expression, 37% say it’s under attack. Freedom of religion, 35% say that it’s under attack and again, all this adds up to roughly 92% of the respondents in this new poll say that at least one American right is under attack right now. Now I’m going to go ahead and clear the air here because the right to bear arms in this country is not actually under attack. The only thing we’re advocating for is getting assault weapons off the street, which was something this country had actually done for a very long time. It’s just the Bush administration with his Republican controlled house and Republican Senate decided to let the ban expire and that’s when the assault weapons came flooding back. We had a ban on assault weapons without infringing upon the second amendment rights of anybody in this country, so no. The second amendment rights really not under attack, but the rest of the things on there, hundred percent absolutely. We have an administration here that actually tried to Institute a Muslim ban. Not for all Muslims, just Muslims from certain countries, but it was specifically targeting Muslims that is impinging on our freedom of religion. We have a president who attacks the press every single day calling them fake news, calling them commies, saying that they lie to us every day, even though he’s the one who lies to us every day. That is an attack on the freedom of the press. He has openly suggested the government starting their own media outlet to combat all that. That would be an attack on freedom of the press. That would be a minister of propaganda type position. The other one’s right to equal justice. We know that’s under attack. If you make less than a hundred thousand dollars a year, maybe even less than $200,000 a year, the justice you face for committing a crime is not the same thing that somebody making $1 million a year is going to face. If you’re black in this country, the justice you face is not going to be what a white defendant would face, and studies have proven that over and over. We have plenty of examples of judges in this country who have repeatedly sentenced black defendants to far longer prison sentences than they did white defendants. Even if they committed the exact same crime. There is no equal justice in this country. Our rights are under attack, but here’s the saddest part. It’s not just the government, it’s not just the system itself that’s attacking our rights. Now the governments let corporations get in on it. Your right to privacy gone. If you’re on any social media outlet in this country, if you buy things from Amazon, if you have a Yahoo email account, if you have an Apple phone, if you have Google on your phone, you don’t have a right to privacy, and I’m willing to bet every single person watching this falls into at least one of those categories. Some of you might fit all of them, but those companies are tracking your every move with their apps. They’re sending your data to other companies who want to buy it, where you go, what you buy, what are your tastes, what kind of music do you like? All of those things that are just little personal nuggets about yourself are for sale right now. So it’s bad enough that we have the government infringing upon every right they can get their hands on, but it’s even worse when we have corporations working hand in hand with them to steal what little privacy we may have left.