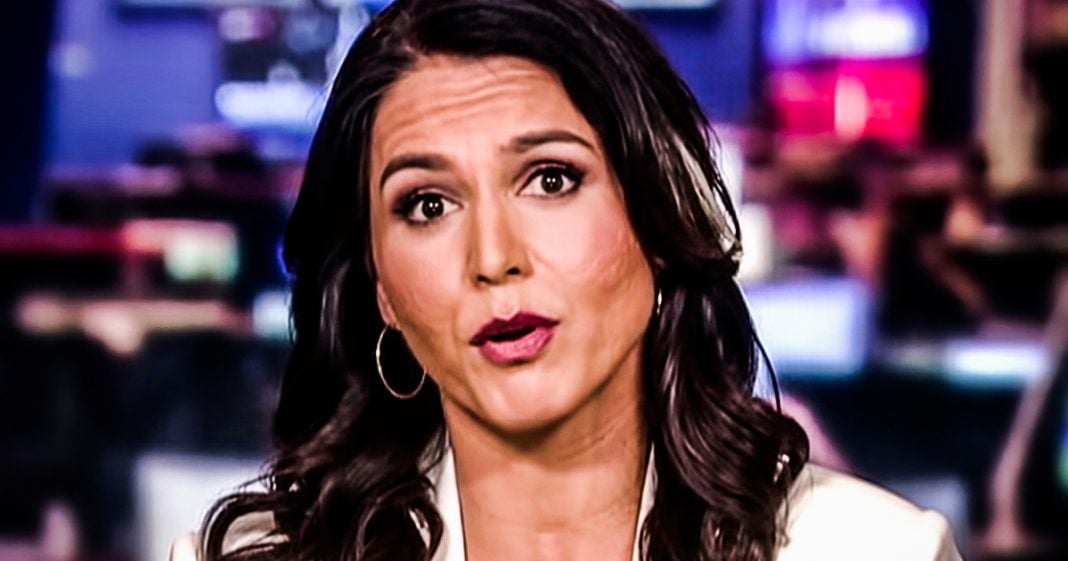 Believe it or not, Tulsi Gabbard’s “present” vote on impeachment really doesn’t matter. What does matter is the fact that she doesn’t seem to have any clear goals about her campaign or her future in politics after announcing that she will not be running for her Congressional seat again, so what exactly is she doing? Her behavior has been erratic and bizarre, reaching out to people who spread false conspiracy theories about liberals, and her rabid base is helping to prop up her nonexistent campaign. Ring of Fire’s Farron Cousins explains what’s happening.

*This transcript was generated by a third-party transcription software company, so please excuse any typos.
We need to talk about Tulsi Gabbard now, as we all know, last week when the articles of impeachment came up for vote, Tulsi Gabbard voted present instead of voting yes or no. And the odd thing about that vote, not that she voted present, but that she admitted that she believes Donald Trump committed crimes, which is why she wouldn’t vote no, but she didn’t want to vote yes, because she just wanted to buck the system, buck the establishment I guess. Like she admitted in an interview that she thinks Donald Trump committed those crimes, but she refused to vote with the Democrats because I guess she just hates them so much. And that makes absolutely no sense. And I have seen some commentators, some that are ridiculous, some that I have huge respect for actually praise her for that, for going against the democratic party. And listen, if you’re going to praise Democrats for voting against the democratic party, then I can’t wait for all of you to air your specials with Joe Mansion where he’s voted down every single democratic, uh, environmental piece of legislation the Senate has ever had to offer since he’s been there. There is a world of frigging difference folks between bucking the establishment, going against the status quo and being a contrarian for the sake of being a contrarian. And that is what Tulsi Gabbard is doing. That is what her entire campaign over the past few months has become. She knows she has zero chance at becoming the nominee. She has not, since she announced she was running, had more than 2% in the aggregate polls. She hasn’t broken 2% she has no chance. And then she announces earlier this a month or so ago, she’s not going to seek reelection for her seat in Congress. Why? That’s also weird. That’s not smart. So she’s not going to be in Congress anymore. She has no chance at winning the nomination. She didn’t even qualify for the last debate, but even before she didn’t qualify, she was thrown out there. Maybe I’m just not going to go. Maybe I’m just going to buck the system. Maybe I’m just going to show them that I don’t need them and then, Oh wow. Well I didn’t even qualify so I guess I, I guess, yeah, I guess you don’t need me, but that’s cool. What the hell is she doing? What is the point of any of this? We have an anti establishment candidate that’s doing really awesome in the polls offering things that this country desperately needs. So if you support Tulsi just because she bucks the establishment. Well, Hey, I got somebody I’d like you to meet. His name is Bernie Sanders cause he does the same thing except he’s doing it successfully and he’s not doing it for the sake of doing it, which is the difference between Tulsi and somebody like Bernie Sanders. Tulsi Gabbert is a contrarion just to be a contrarian. There’s no policy involved in it. There’s no end goal. She’s just doing it because it’s red meat to her rabid fan base, which also confuses the hell out of me. Yes, she is exceptionally attractive, but you have these incells online who are ready to give up everything they have to support Tulsi Gabbard just because they find her attractive. I’m sorry, that’s not a presidential platform. It’s weird and creepy, but that’s what’s happening. Not with all of them but with plenty of them. So again, I asked the question, what the hell is Tulsi Gabbard even doing at this point? She has no chance at winning this nomination. She’s not even going to run for Congress again. The only thing I can think that she is aiming for is some kind of job in conservative media. She is a darling on Fox news. She got praised from Donald Trump this past weekend when he was at the turning point USA rally, said he admires her, praised her for voting present, and bucking the democratic establishment. Let me tell you something, folks, bucking the democratic establishment is not a platform and it does not accomplish anything except making you look like a whining, petulant child. I am no fan of the democratic establishment either. As people who’ve been watching this channel for years, understand I don’t like it, but I’m also not going to sit here and just say that they’re bad without offering something better. But that is exactly what Tulsi and her fan base are doing today. It serves no purpose. It’s not even going to further her own career, but Hey, makes for a couple of good soundbites, right? Makes her seem like she’s the outsider, the one fighting against this big corrupt machine with no plan and no purpose and no policies to stand on.