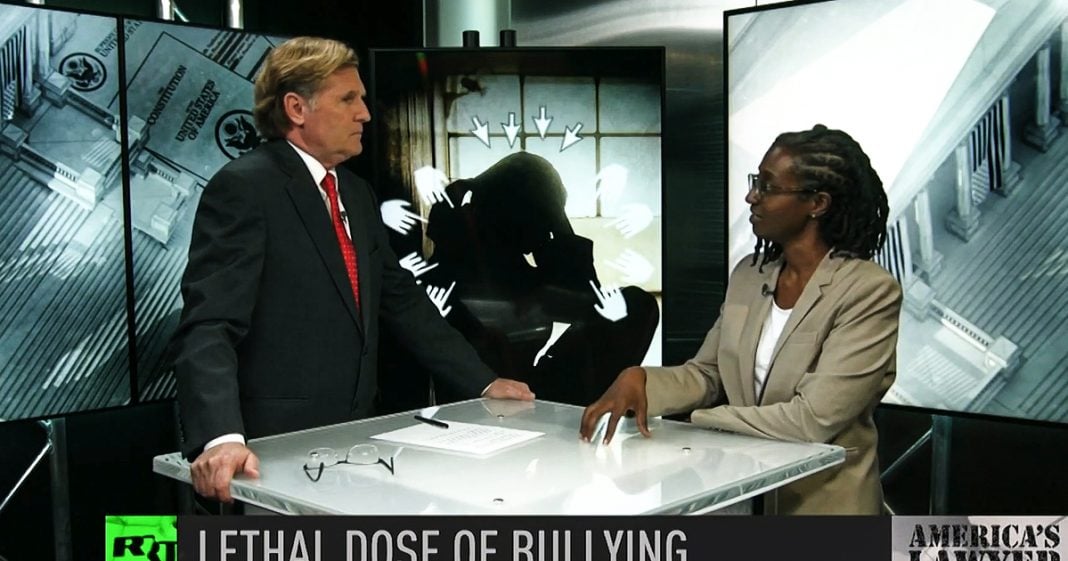 Via America’s Lawyer: Mike Papantonio and Trial Lawyer Magazine editor Farron Cousins discuss Elizabeth Warren and the looming threat she poses to Wall Street and Big Tech, should she win the Democratic nomination. Then, attorney and former DC council member LaRuby May joins Mike Papantonio to walk us through a case of child suicide at a DC charter school. 12 year-old Stormiyah Denson-Jackson was a target of bullying and eventually found dead in her dorm room. Internal emails show that while DC had in fact mandated that schools provide mental health resources to students, the SEED charter school chose NOT to abide by this requirement, likely contributing to the death of Stormiyah.

Mike Papantonio:             Senator Elizabeth Warren’s making lots of enemies while running for president, and that’s actually a good thing for her campaign. I love the enemies that Elizabeth Warren is making. That list that I just gave you, those are her enemies.

Mike Papantonio:             Mark, yeah, Mark Zuckerberg comes out on Facebook, we’ve got to stop Elizabeth Warren because she’s interested in the antitrust issues for all these social media organizations. And if we’re not careful, she’s going to get her way. So Wall Street is spending huge amounts of money already trying to make sure that Elizabeth Warren is not the person that ends up in the primaries. Look, there’s only two candidates that are going to make it, in my mind, that we could actually live with, Bernie Sanders and Elizabeth Warren. They’re trying to take both of them out. Give me your take.

Farron Cousins:                  Well, it’s really interesting what’s happening. You have the folks on Wall Street, the alleged Democrats on Wall Street, which they are major democratic donors and they flat out came out and told CNBC, listen, we are Democrats. We do not like Donald Trump. He is bad for the market. But I promise you this, even as Democrats, if you make Elizabeth Warren the nominee, we’re putting our money behind Trump because Elizabeth Warren wants to come in and enforce regulations. So does Bernie Sanders. But while they are kind of afraid of Bernie Sanders, I don’t think at the moment they actually view him as somebody that’s gonna win the nomination. So they’re focusing most of their hatred on Elizabeth Warren. The lobbyists are coming out against Elizabeth Warren. Mark Zuckerberg and the social media people because she said, we’re going to break you up and you can’t run 800 different businesses and gobble up the small ones.

Mike Papantonio:             Okay. Let me read what Zuckerberg said. I mean, he’s, he holds this meeting with his employees, asking them to create a, to create this big push against Elizabeth Warren. What, however they can do it. Get busy doing that. Here’s what he says. You have someone, this is Zuckerberg. We, you have someone like Elizabeth Warren who thinks the right answer is to break up the companies. If she’s elected president, we got an issue. We’ve got a big challenge ahead of us. So what he’s talking about, the reason he’s already spending money against her, the reason he’s, he’s gaming, already gaming Facebook against Elizabeth Warren and against Bernie Sanders.

Farron Cousins:                  Right. And, you know, especially when you take a company like Amazon, like you just mentioned, what are they? Are they a place to buy goods and clothing? Are they a place that’s gonna run security systems? Are they in advertising? Are they a military contractor? Are they a cloud computing service? The answer right now is they’re all of them and that’s the problem. And they gobble up these smaller companies who come in and do these things and then they become these, you know, behemoths and Elizabeth Warren is just simply saying, listen, no more behemoths. We don’t need one company running 15 things. How about 15 companies.

Mike Papantonio:             Doesn’t it freak you out when you see Progressive’s coming to the aid of Mark Zuckerberg? When you say, oh, they can’t mess with my Twitter. You know, we can’t break up Facebook. We got to, look, let me put this in perspective. Facebook the fine of $5 billion by the federal trade commission. You remember that? Federal trade commission says that you, you have stomped on privacy issues. You’re going to fine $5 billion. That was like big deal. That was a, a no event for Mark Zuckerberg. Then $100 million from the SEC where they’re sharing information about people that are on site, they’re selling it to people.

Farron Cousins:                  I have and it’s a lot of coming from more of the kind of centrist Democrats. They think Zuckerberg is their friend. They think Zuckerberg is like them, a corporate Democrat. But the truth is this guy is in it for himself. He will support whatever candidate, whatever party is going to put more money back into his pocket. And there is a distinction here I want to make. These, these, the Zuckerbergs, the Wall Streets, they’re not afraid of Elizabeth Warren because she may increase their taxes, believe it or not they actually don’t care about that too much. What they care about is she wants to come in and just enforce the rules that are on the books because that hasn’t been done in decades. It hasn’t been done probably since the 70s.

Mike Papantonio:             Most viable candidates out there, Bernie Sanders and Elizabeth Warren, you watch these flying monkeys go after them. They want Biden because Biden is just a repeat of Hillary Clinton.

Mike Papantonio:             In 2018 a young student took her own life at the SEED Charter School in Washington, DC. In lawsuit filed earlier this year, the parents or the child alleged that the school did nothing to prevent the constant bullying their daughter suffered, and that’s only the tip of the problem. That’s the tip of the iceberg. It’s only a small part of the story. Joining me to talk about this lawsuit and the information that’s already been uncovered is attorney LaRuby May. LaRuby, let me, this, this case, it seems like over a period of the last five years, America’s Lawyer has done half a dozen of these stories. Child committing suicide in a setting where the people in control didn’t have control. This is a charter school.

Mike Papantonio:             And we already know all the fundamental problems with the charter school. Tell us this story. Just, just lay this out for the viewers.

Mike Papantonio:             What were the, as I looked at the background of this case, there were all of these warnings that took place at the school. First of all, the, the psychology, the psychiatrist that they had following her, it wasn’t even a psychiatrist.

Mike Papantonio:             Wasn’t licensed. They were a psychologist of sort, unlicensed. The child came out and said, I don’t have any reason to live.

LaRuby May:                         Yeah. No, so, so Stormiyah expressed her suicidal ideation to the people in charge, to the people that she was supposed to and they brought her to the site and as you mentioned, an unlicensed psychologist who did a suicide assessment on her and deemed her low risk. And to what we, what we know right now is in the country, African American children between the ages of 10 and 15 are one of the highest rates of, of increase of suicide, so.

Mike Papantonio:             And the laws are very clear that a public school has to follow. If you see A, then you must do B. If you see B, you must do C. You must have licensed people that are making estimations of whether this child is at risk. That was thrown out the door because this is a charter school.

Mike Papantonio:             Tell me, tell me, if you would, give me how outrageous the conduct was of the school when, when people started asking questions.

Mike Papantonio:             What are the documents showing? If you just say, just give me in every case like this there’s sometimes there’s outrageous documents and you go, when a jury sees this, they’re going to be really angry.

We’re not like the regular public school. We have autonomy. We can do what we want. We can regulate ourselves. We can make independent decisions on laws that are in the district of Columbia and what we find out in Stormiyah’s case is when adults decide to, to interpret the law the way they want to, children suffer unnecessarily.

Mike Papantonio:             So, the interesting thing about this is, I was looking at this as, you were actually involved in creating some of those laws that said, if you are in, a school must do these things because we have this huge problem of children within this age group that basically a lot because of despair, economic despair, end up committing suicide along with a lot of other factors, but economic despair is certainly one of them. So you helped author that. Then all of a sudden the, for some reason the charter schools think that they’re above the law. I don’t get that.

LaRuby May:                         They just believe that autonomy means that they can make their own independent decisions and so that they don’t have to follow the law. And we’re very clear that, Councilman David Grosso introduced the legislation. I was very fortunate to support the legislation that said, because of the rising number of suicides among African American middle school aged children, we’re going to require that teachers and staff members have suicide prevention training so that we can prevent children from committing suicide. And not only did the school not do the training, but the authorizer who funds the school said, you know what? It’s okay. It’s put it over there in the pile. We don’t care if you enforce the law. And unfortunately, today we’re standing with the loss of life of an amazing young lady.

Mike Papantonio:             Yeah. We, I want to follow this story as it goes on. As your trial gets closer, let’s do this story again. Let’s see whether the SEED organization, the charter school organization owns up to what they’ve done here. Thank you for joining me. Okay.