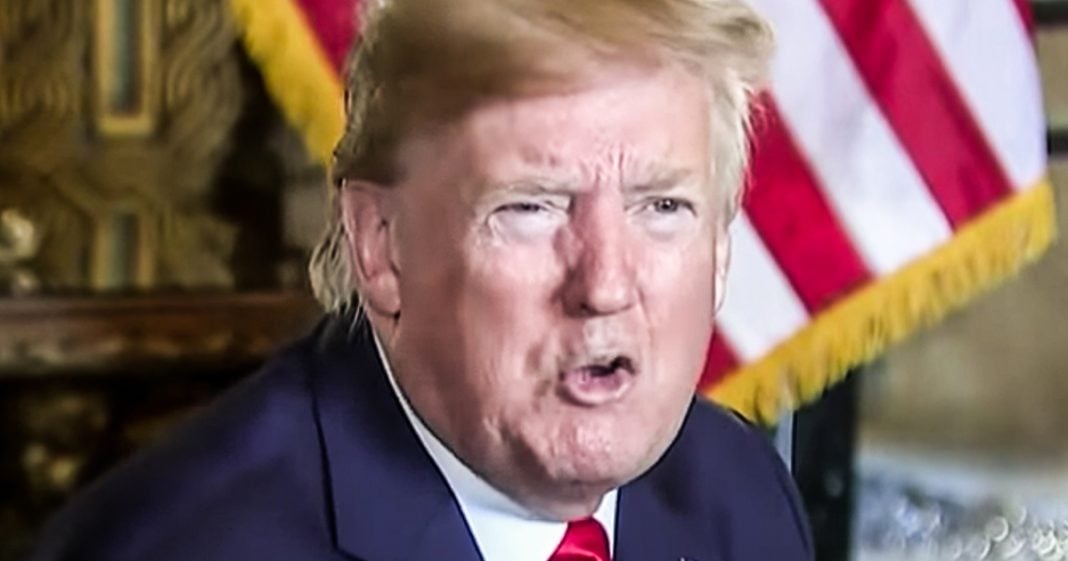 Rather than spending time with his family on Christmas Day, Donald Trump decided that the best use of his time would be to spend the day attacking impeachment and the Democrats in Congress on Twitter. The President’s tirade showed that the impeachment issue is getting under his skin, but the bigger question is whether this was the whole plan or not. Ring of Fire’s Farron Cousins discusses this.

*This transcript was generated by a third-party transcription software company, so please excuse any typos.
On Christmas morning, the white house released a video of Donald Trump wishing everybody in this country a very Merry Christmas. He was very subdued. You know, he wasn’t his over the top self said everybody should have warmth and bliss, a warmth and bliss of this holiday season. Very nice. You know, message. He didn’t screw anything up. So that’s a plus. But then just a few hours later after releasing what was supposed to be just a nice little video to get us through the day, Donald Trump himself decided to ignore his family, ignore Christmas facit- festivities at the white house, and instead took to Twitter to rant and rave about the Democrats and impeachment. Here is what the president tweeted out later in the day on Christmas. Why should crazy Nancy Polosi just because she has a slight majority in the house be allowed to impeach the president of the United States got zero Republican votes. There was no crime. The call with Ukraine was perfect with no pressure. She said it must be bipartisan and overwhelming, but this scam impeachment was neither also very unfair with no due process, proper representation or witnesses. Now Pelosi is demanding everything the Republicans weren’t allowed to have in the house. Dems want to run majority Republican Senate hypocrites. Um, okay. That’s a lot of uh, random thoughts packed into just two little tweets there. So let’s try to dissect it as best we can. Uh, first and foremost, I think the big takeaway is that Donald Trump is angry and Donald Trump is scared. And Donald Trump also doesn’t understand how the constitution works. This was not a trial. You weren’t entitled to witnesses. You weren’t entitled to representation. This was just a vote on articles put forth by the house of representatives. You get no more representation in this as you would if they were voting on a budget. That’s not how Congress works. They are a separate branch of the government. Now in the Senate, obviously you can have those things. You, you can show up, you can go every day like you’re a defendant in a courtroom. You can send your lawyers, you can send your witnesses, you have every legal right guaranteed to you under that US constitution in the Senate, but you don’t have it in the house. But here’s the thing folks, this was on Christmas day. All right? He has a very young son that lives with him at the white house, he has a wife that lives with him at the white house as far as we know. Why, why is he sitting there on Twitter, insulting Democrats attacking the constitution itself instead of maybe just spending time with them. You know, maybe do something for once in your life that shows that you care about that family but you don’t. And that’s very weird to me. And what’s even weirder about it is the fact that conservatives haven’t seemed to put that together. They hold Donald Trump up as some kind of beacon of morality for some reason when he may in fact be the actual worst family man we have had in the white house, in history, constant affairs, neglecting his children, treating them like garbage behind the scenes from reports that we know of. And here he is on Christmas day, once again, neglecting his family to tweet out these angry insults at the Democrats. The man is running scared at this point and that’s good. I just hope that this wasn’t the only point the Democrats were trying to make. You know, it’s not difficult to drive Donald Trump insane. He’s already there. You just need to open the car door for him and let him get out and walk around for a minute. He is insane. But I’m hoping that these articles of impeachment weren’t just to send a message, weren’t just to get under Trump’s skin. That’s what worries me the most about this. I hope the Democrats did it because they understand and respect the rule of law, not because they enjoy watching the president have meltdowns on Twitter. That doesn’t help anybody.