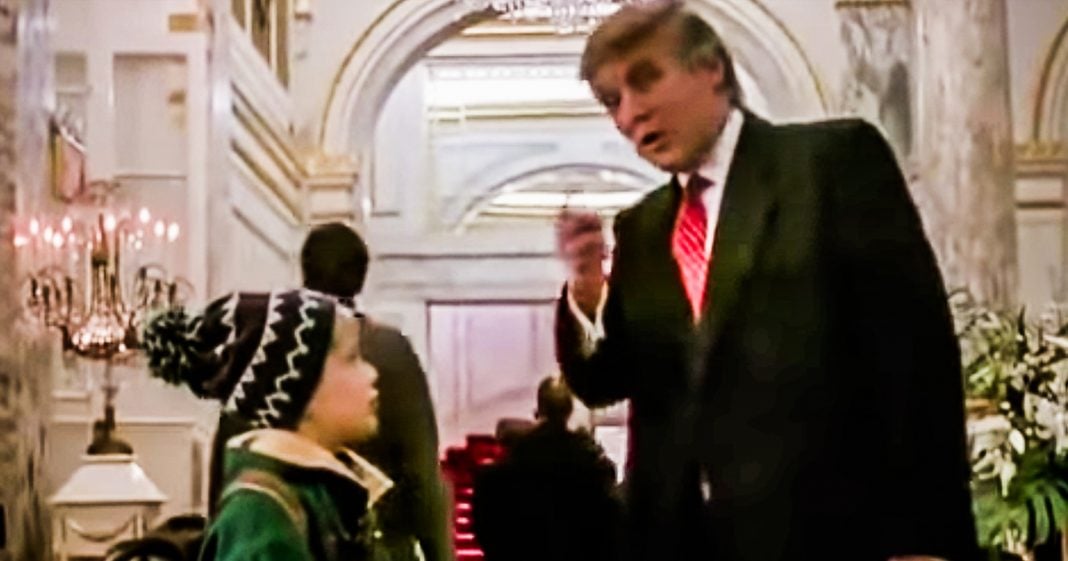 Conservatives had a collective meltdown after the CBC cut out Donald Trump’s cameo from their broadcast of Home Alone 2, but no one had a bigger meltdown than the President’s son. He took to Instagram to air his frustrations, and it just made him appear even more unhinged and psychotic than usual. Ring of Fire’s Farron Cousins explains why the cameo was cut, and why it has been cut out by the CBC for 5 years now.

*This transcript was generated by a third-party transcription software company, so please excuse any typos.
Canadian citizens who decided to tune in to the Christmas movie Home Alone 2. Over the last few days, we’re in for a shock. When they found out that the CBC, the Canadian broadcasting corporation, decided to cut out a few seconds of Donald Trump appearing in that movie Home Alone 2. Now, here’s what happened. And for those who don’t know, Donald Trump has a very, very brief cameo in Home Alone 2, uh, Kevin McAllister, McCauley Caulkins character goes up to him in the hotel or in the Plaza hotel. He says, Hey, can you show me where the lobby is? He says, yeah, it’s right over there. That’s it. That’s the extent of Donald Trump appearing in that movie. And as is often the case with most, uh, both broadcasting of movies and even reruns of TV shows, certain parts get cut out for time and the CBC decided, you know what? This is not crucial to the plot. We’re going to cut out this little part because we need that extra few seconds. We can sell that in advertising. It drove conservatives here in the United States, insane, even more insane than they usually are on a regular day that a Canadian broadcasting company aired this movie without the clip of Donald Trump for one and a half seconds. Nobody was more triggered by this than the guy who wrote a book called triggered and that was Donald Trump jr who took to Instagram, posted a story about how they cut his daddy’s part out of Home Alone 2, and then this was the caption that he added to the end of it. Absolutely pathetic. The liberal media like CBC is where Trump derangement syndrome manifests itself fully. Imagine being so pathetic in your quest to attain some BS level of wokeness that you need to cut out a scene that is probably one of the most famous cameos of the era. Imagine being so triggered that you can’t even leave a Christmas movie alone without editing. This is what we are up against in 2020 this is the filter by which most people receive their news. Pull it up. I’m going to, I’m going to keep reading it and say, this is the filter by which most people receive their news from Home Alone 2. That’s, that’s where we’re getting our news from these days. Home Alone 2 the wet bandits escaped. Fantastic. This is why it is not a fair fight, but this is also why we will win. Yeah. I imagine if people are getting their news from Home Alone 2, then yeah, you’re probably gonna win the election. People see through this crap and are fed up of it. The media should go register as a lobbyist for the leftist. Their bias is so flagrant. They don’t even pretend to hide it anymore. They prove every day that they really are the enemy of the people. Imagine being so pathetic in your quest to attain some BS level of wokeness that you need to cut out a scene that is one of the most famous cameos of the era. Imagine being so triggered. Don jr tells us that you can’t not edit a Christmas movie. Donnie, I don’t know if you’ve ever seen any movie that’s ever been broadcast on television. They’re scenes missing from every one of them. If you want to watch the full uncut version, might I suggest watching it on Disney plus, I mean here in the United States, I watched a Home Alone 2 multiple different times showing on a, what is it, free form I guess, owned by ABC every single time your dad was in it. But here’s the thing. A lot of people don’t actually know. The only reason Donald Trump even has a cameo in that movie is because Trump insisted on it. He wasn’t going to let them film inside the Plaza hotel, which he owned at the time unless they gave him a cameo. So it’s not even like, oh, we’re in New York. We need to have a real famous New Yorker. No, it was your daddy throwing a temper tantrum in the early nineties saying, you can’t film in my hotel unless you put me in the movie. So they literally just cut out your dad’s temper tantrum. If anybody’s triggered junior, it’s you. Who gives a crap what the CBC airs for their Christmas movies. How about you just enjoy the time and spend it with your family? Or I actually, I can’t even say that to you junior. Are they even still talking to you? I mean, the kids are living with your ex wife, right? While you’re going around, screwing the Fox news host, so maybe you don’t have anybody to spend Christmas with, and maybe this was your only outlet to voice your frustration at the fact that you gave up your whole family because like daddy himself, you couldn’t keep it in your pants.