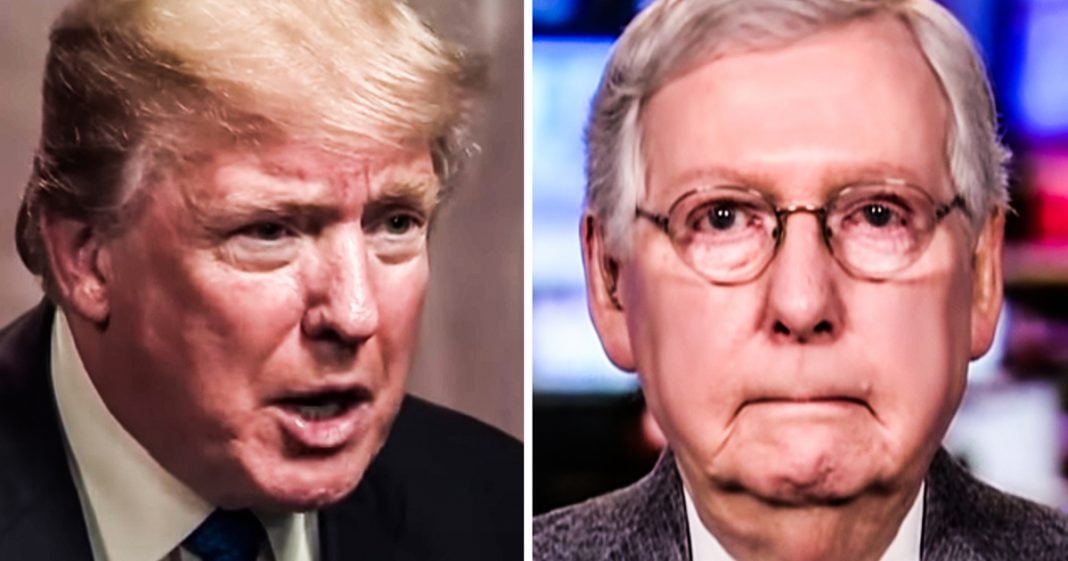 Daily tracking polls on impeachment have provided some really bad news for Donald Trump and the Republicans, as 55% of the public now wants to see Trump convicted and removed from office. Could this new poll change Mitch McConnell’s mind about the Senate trial, or are the Democrats going to overplay their hand and lose the trust of the public? Both could happen, but Ring of Fire’s Farron Cousins explains the most likely outcome.

*This transcript was generated by a third-party transcription software company, so please excuse any typos.
According to the latest round of polling, Donald Trump is in trouble. This latest round of polling conducted by MSN, which is actually tracking daily attitudes towards impeachment and conviction. And they have now found that 55% of people in this country are in favor of convicting and removing Donald Trump from office in the Senate trial. 55% one week ago, that number was at 48% only 40% of people in this daily aggregate polling now say that Trump should not be convicted. Last week that number was 47 so a week ago there was a one point discrepancy in the convict versus not convict. 48 to 47 today, one week later, it is 55 to 40 there is now a 15 percentage point discrepancy between those two numbers. A majority of people in this country want the president convicted and removed from office. So here is how this plays out from this point forward. Three possible paths. One, nothing changes. Articles of impeachment go to the Senate and at that point Mitch McConnell effectively kills them. The second path is that Nancy Pelosi decides to withhold the articles of impeachment from the Senate. Understanding right now that the public is on her side, the public is against Donald Trump. They do want him removed from office. And most of them likely understand that Mitch McConnell’s gonna make sure that doesn’t happen. So Pelosi holds them. And if we go down that road, there’s now two different roads we go from there. Either one, it pays off for the Democrats and the public sees that they are finally playing that three dimensional chess we’ve heard so much about over the last three years, or it backfires spectacularly. The public loses interest. The public forgets about all this and the public believes that the Democrats are instead afraid that, uh, their articles of impeachment were full of crap. So there’s the two paths from there. The third path is that it goes to the Senate again, McConnell does his thing, makes it go away. We have a little bit of a trial. Public support for impeachment goes up even more, but then after it all ends, everybody forgets and moves on. There really aren’t a lot of good outcomes from this and that overall is the problem. It’s fun to see these poll numbers right now, right? You know, 55% want Trump convicted and removed I, I’m part of the 55% trust me, it’s obvious the man committed crimes, it’s obvious the man should be removed from office, but I also understand that the Senate will never let that happen. The only thing we can hope for is that the public does not forget about it because that’s where the real threat lies. The public loses interest and that is why I had repeatedly said the Democrats should not rush through these articles of impeachment because now the sentence is going to vote on this thing in January. They’re going to vote on it and then we will have probably 10, 10 and a half months, maybe before the election. The public as a whole has the attention span and the memory of a fruit fly. They will forget about it in two weeks. I remember the uproar of the kids in cages down on our Southern border, Southern border, where? Where’s the uproar today? Everybody forgot that that happened. The media moves on. Other things go on. You know, every time there’s a mass killing in the United States, whether at a nightclub or at a school or at an outdoor concert, Oh my God, it’s horrible. It’s the worst thing we’ve ever seen for two days, and then we move on. We forget, right? We got other things happening. Same thing’s going to happen with impeachment. The Democrats rushed it, and I’m afraid at this point, they rushed it to the point where it’s going to hurt them more than it hurts Donald Trump. Maybe I’m wrong. I hope I’m wrong. I would love to be wrong on this particular issue, but there is no part of me that thinks that I am.