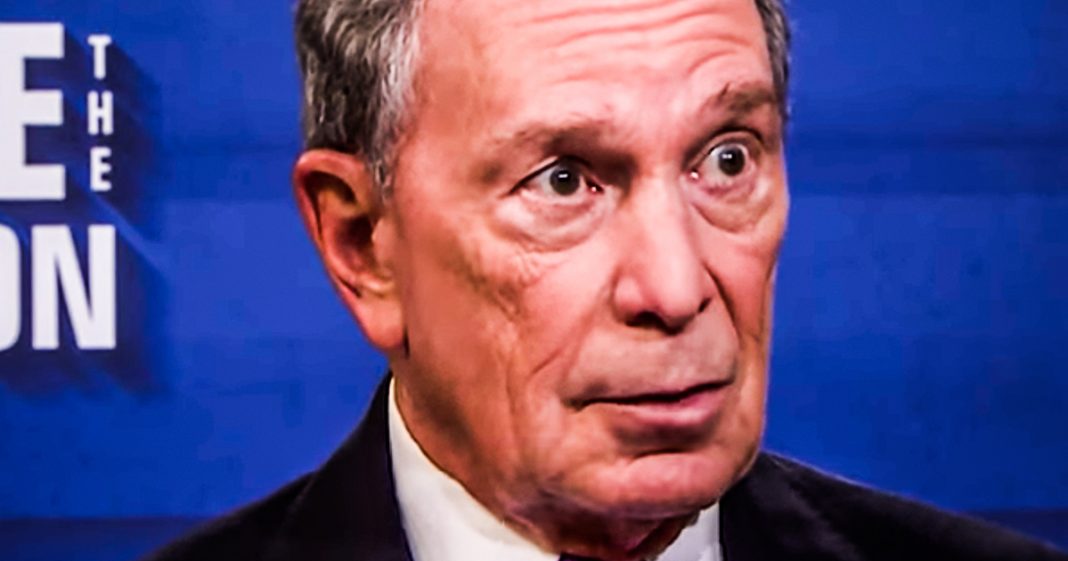 Democratic Presidential candidate and billionaire Mike Bloomberg has been busted using prison labor to make campaign phone calls. The prison was contracted by one of Bloomberg’s campaign contractors, but that doesn’t make the story any better. Prison labor was exploited to help the campaign of a man worth $55 billion, and this story alone should force Bloomberg out of the race. Ring of Fire’s Farron Cousins discusses this.

*This transcript was generated by a third-party transcription software company, so please excuse any typos.
Michael Bloomberg, one of the richest men to ever run for president of the United States with an estimated net worth of $55 billion was busted earlier this week by a phenomenal report in the intercept showing that Bloomberg’s campaign was actually using prison labor to make phone calls on behalf of the campaign. Now here’s how this happened according to the report in the intercept, Bloomberg’s campaign contracted out this company to then hire people or do whatever they have to do to make these phone calls. Well they hired a company, the company’s name was a pro comm. They’re based in New Jersey and then pro com subcontracts out all the phone call work. And what they did was they subcontract some- subcontracted out these phone calls to a women’s prison, a minimum security women’s prison in Oklahoma. And they thought, Hey, this is perfectly fine. We’re probably saving a lot of money cause we only have to pay $7 and 25 cents per hour to these inmates. Oh, excuse me, not to the inmates, to the prison because that’s the minimum wage in Oklahoma, $7 and 25 cents. But the a maximum wage for these inmates is $20 per month. So essentially they are forcing these prisoners to make phone calls on behalf of the Mike Bloomberg for president campaign for $20 a month. And Bloomberg again is worth $55 billion. If you think this man couldn’t have found enough people to go fill up a call center and make phone calls for his campaign, paying them to do it, you’re out of your mind. This man didn’t have to do this. He didn’t have to hire this contractor. And then the subcontractor and whatever, they should have also known. They should have asked for the receipts like, Oh yo, we paid you to do this. So who do you have doing it? Oh, well we uh, we, we actually just, we got the prison to do it. The what? The prison? No, no, I’m worth $55 billion. You need to hire people. I can pay for that. Let’s do that. Let’s not hire prison slave labor to make calls on behalf of my campaign. This story alone in and of itself should disqualify Bloomberg from running for president. This is it, right? This should be it. You cannot support Mike Bloomberg. Not that I’ve ever met a Bloomberg supporter. After hearing this crap and sure, he came out and said, Oh, well, we’ve now cut ties with these people. Oh my goodness. How horrible is that? How horrible is it? That’s capitalism for you, bud, that that’s what happens. That’s how this system works now, whatever they can do to squeeze as much labor for as little money out of any citizen of this country is what they do. That’s what your subcontractor did. That’s what your contractors do, and that’s what you’re doing here too. You have spent well over $100 million out of your own pocket to run ads in States that you have no chance of winning. You could have instead put that money towards, I dunno, flipping some more house seats, flipping a couple Senate seats, $100 million, absolutely could have bought one of those elections, but that’s not good enough for Mike Bloomberg because Bloomberg only cares about himself. He wants to keep those tax breaks that he’s enjoying. He wants to prevent a wealth tax from being put in place, and by God, if he’s got to use prison slave labor to do it, then he’s going to do it. And that practice would have continued had he not been caught by the amazing reporters at the intercept.