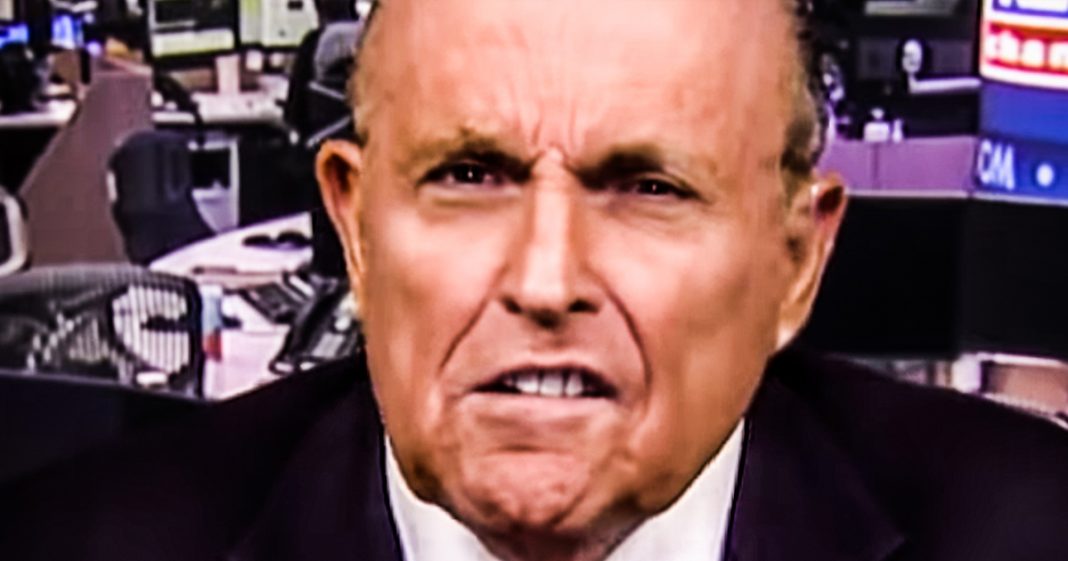 The Republicans might still be bitter about Greta Thunberg winning Time Magazine’s Person of the Year award, but they still got one for themselves: Rudy Giuliani has officially been named as The New Republic’s “Scoundrel of the Year.” And that’s quite a good pick. Giuliani has managed to be at the heart of all of Trump’s scandals, and has proven through his countless media appearances that he is grossly incompetent and more than a little unhinged. Ring of Fire’s Farron Cousins discusses Giuliani’s new accolades.

*This transcript was generated by a third-party transcription software company, so please excuse any typos.
Well, conservatives may still be upset that Donald Trump did not win time magazine’s person of the year and that honor instead went to climate activist, Gretta Thunberg. Um, they can still count a victory. It may not be Donald Trump who won the latest accolade from a well known news site, but it is Giuliani, a Republican and Rudy Giuliani has been named scoundrel of the year by the new Republic. And I gotta say this is a very well deserved reward. I would think the only person in this country right now who would also be a pretty good qualifier for scoundrel of the year would be Jim Jordan. I mean, let’s be honest, not only is the guy a scumbag in Congress, but we now know according to these lawsuits from Ohio state university, he’s been a scumbag his entire life. So Jim Jordan, I would like to think was a close second for scoundrel of the year, but the new Republic did not, uh, identify who was in second place. Maybe you can get it next year, Jim, don’t, uh, don’t worry about that. But anyway, yes, I think Giuliani is a very deserving recipient of scoundrel of the year, which apparently is also a new thing they’ve created. And here’s the thing, and this is, you know, kind of rehashing everything we have said in the last 12 months about Rudy Giuliani. He is the most incompetent attorney in the United States. He is the one who admitted on live TV that Donald Trump did in fact have a plan for Trump tower Moscow. And that was roughly about a year ago when the Mueller investigation was still taking place. Giuliani goes on TV and actually admits that. Oh yeah. That thing that you’re worried he may have done and they may have had leverage on him for, yeah, he did that. He then goes out during the Ukraine thing, tweets out, screenshots of his text messages between the people he was accused of cohorting with. Right. I mean, Giuliani was in the heart of that scandal and he was also trying to defend Donald Trump from it. And he says, look, Trump’s totally innocent because everything in that whistleblower report is verified right here on my phone. Oh, now I don’t know if that necessarily makes him a scoundrel, but it certainly makes them an idiot. But again, Giuliani has also, while the house is hearing from impeachment witnesses before they voted to actually impeach Trump, while they’re interviewing people, while the judiciary committee hearings were happening, Giuliani was back over in the Ukraine doing the same things that his boss got impeached for. Not to mention the fact that the Southern district of New York is investigating Giuliani for potential criminal activity related to the things that he was accused of even before he went back to the Ukraine to do it again. You know, Giuliani is the dumbest criminal, not just the dumbest attorney, the dumbest criminal that the United States may have ever had, if in fact he gets convicted. If not, he’s just the dumbest attorney, gets convicted, then he’s the dumbest criminal. And here’s why. Cause this guy keeps returning to the scene of the crime. This guy keeps going back to the, you know, it’s like a bank robber who goes in and robs a bank. Then comes back the next day without a mask on. It says, Hey, you got any more money I can take you. Can I anything else laying around? No. Okay. I know they’re investigating me for yesterday, but whatever. I just want to see if you had any more. All right. See you tomorrow. I’ll be back with a gun. Giuliani is absolutely the scoundrel of the year and not just because of his involvement with the criminal activity, but because of the sway that he has over the president of the United States himself. Giuliani has been instrumental in getting ambassadors fired, which he freely admits. He has been instrumental in trying to sway the actual foreign policy of this country to benefit his own clients so that he can make money off of it, and I know that’s an accusation Republicans have lobbed at Giuliani to distance him from Trump, but that is something that has happened. Giuliani has had to, or try to at least tell Trump, Hey, do this prisoner swap with Turkey because they got a guy that we want back and we got a guy that they want back and the guy that they want back is a guy that I can get as a client. So if you do this for me, I can make a couple million. In that particular instance, Trump did not go through with it, but Giuliani truly is out there only working for Giuliani. He does want Trump to be reelected and I believe that he thinks if Trump is reelected, he’s got a good chance and maybe becoming the next attorney general if William Barr decides he’s done being Donald Trump’s lapdog. Giuliani is the scoundrel of the year, and that is a title that I hope he remembers for the rest of his life.