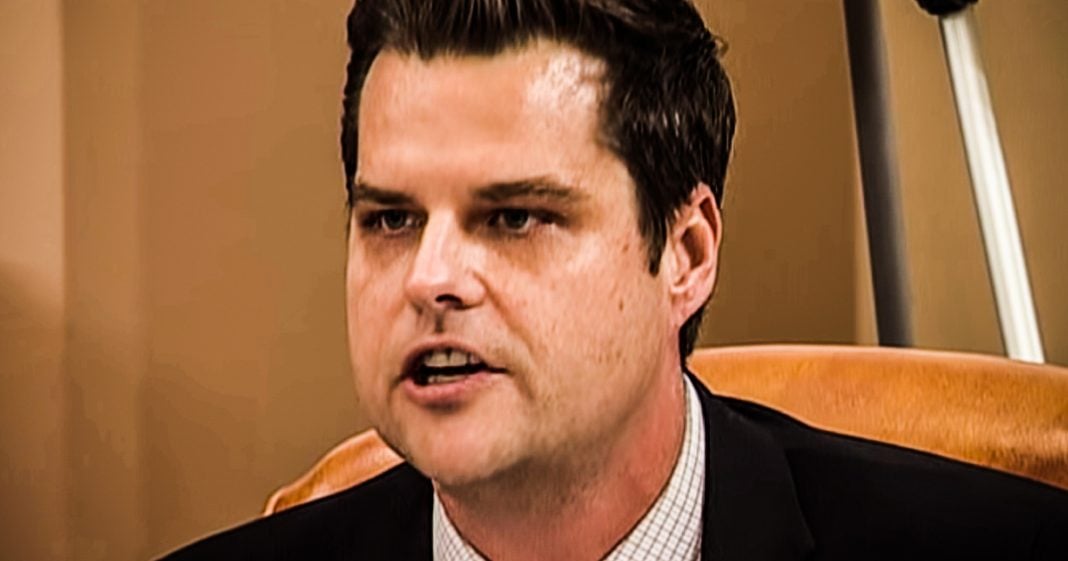 Republican Congressman Matt Gaetz would have likely been a nobody if Donald Trump wasn’t the President of the United States. But, thanks to his constant shenanigans and love of being on TV, Gaetz has become well-known outside his small district in Florida. But not in a way that should make him or his constituents proud. Gaetz is a clown, and as long as it gets approval from Donald Trump, Gaetz is perfectly happy with this role. Ring of Fire’s Farron Cousins discusses this.

*This transcript was generated by a third-party transcription software company, so please excuse any typos.
Recently in a political cartoon, I believe by Andy Marlette, he depicted Republican representative Matt Gates as a court jester who goes out and performs for Donald Trump to make Donald Trump happy. And I’ve been thinking about that cartoon a lot over the past few weeks because it is 100% accurate, you know, and yeah, I go after Matt Gates a lot. I live in his district. He is unfortunately my congressmen. And the reason it bothers me so much about what Matt Gates has done over the last couple years since Donald Trump became president is not just because it’s very transparent, but also because I miss constituent and we have a district down here that gets savaged by hurricanes every couple of years, right? We’re a tourist place. We’re still dealing with the impacts of the BP oil spill. To put it bluntly, this district still needs help and Matt Gates hasn’t given us to given it to us. And the reason is because he has spent his entire time in office going out there being the court jester for Donald Trump. Just think back the last couple of weeks, what Matt Gates has done. First and foremost, when he tried to storm the impeachment hearings with his gaggle of Republican morons back in October, broke the law by filming with cell phones in a a a secure area where cell phone video is not even allowed. But he did it to make Donald Trump happy. And then when the house judiciary committee finally got in on the impeachment thing, Gates made a complete fool of himself repeatedly yelling out when it wasn’t even his turn to speak. Navitar had to gavel him quiet, but Gates did it because it made Trump happy. In fact, Trump actually came out later that day, tweeted out how proud he was of Matt Gates and the other Republicans for causing such a scene. And even before that, during the entire Mueller investigation, Matt Gates was on TV every couple of hours out there telling us why this is such a witch hunt, why Hillary Clinton should be the one investigated. She should be the one going to prison. Obama should go to jail for illegally wiretapping Trump, which didn’t actually happen. Gates is out there pushing Donald Trump’s conspiracy theories, pushing all of this misinformation for the sole purpose of making Donald Trump smile. So yes, by every single measure, including his neglect of his district down here in Florida, Matt Gates is nothing more than Donald Trump’s court jester.