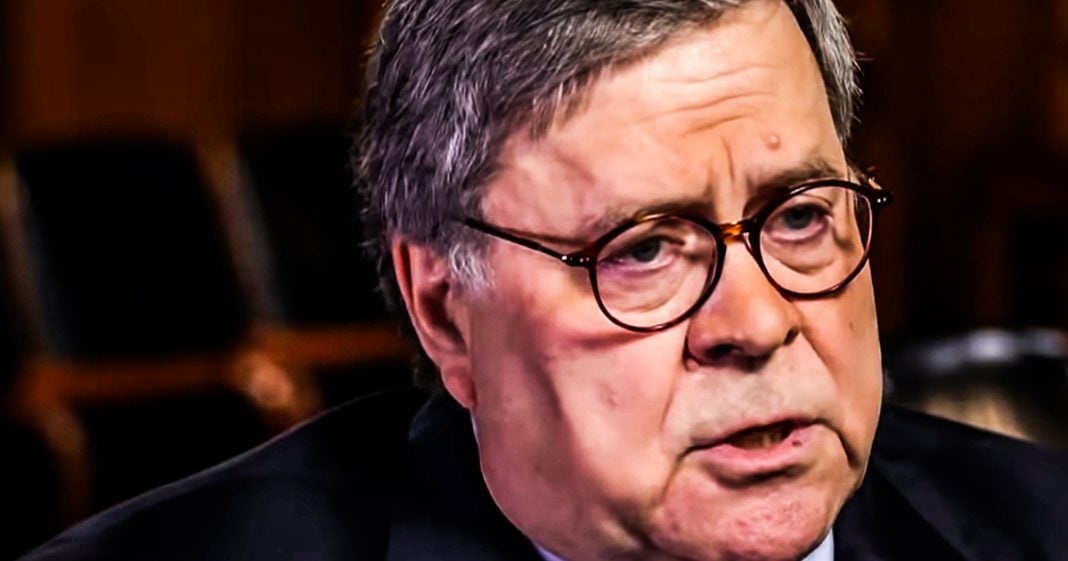 According to a former DOJ spokesperson, Bill Barr is allegedly purging the FBI and the Justice Department of people who are not loyal to Donald Trump. He’s doing this by attacking his own organization just like Trump does, and by parroting verifiably false conspiracy theories about his Department. Ring of Fire’s Farron Cousins discusses this.

*This transcript was generated by a third-party transcription software company, so please excuse any typos.
Recently, a former department of justice spokesperson by the name of Matthew Miller appeared on MSNBC’s am joyish program to talk about the fact that attorney general William Barr is actively engaging in conspiracy theories that Donald Trump is also out there pushing. And by doing so, he is specifically targeting the members of the FBI or justice department and any other organization he can get his hands on who are not 100% completely loyal to Donald Trump. Now, ever since Donald Trump took office, we’ve heard the stories about the deep state conspiring against him. And unfortunately, those conspiracy theories have also been pushed by some of those people on the left. That’s very disappointing, especially considering the fact that we now know because of the inspector General’s report, there was no deep state cue. There was no, uh, abuse by the FBI of the FISA courts or the FISA system. Everything minus a few missteps that weren’t related in any way to a bipartisan attempt to throw out Donald Trump. Everything was okay. Right? So that’s that. Except for the fact that William Barr is out there telling us that he doesn’t accept those findings and he believes that there was in fact a deep state cue taking place to oust Donald Trump before he was even elected. Now again, the IG report says that this did not happen, but Bill Barr has to think that it happened because that is what Donald Trump thinks happened. Bill Barr still wants an investigation into the people in the FBI that may have been a part of this because he thinks the inspector general did a poor job conducting his investigation on the, uh, investigation itself. But here’s the thing, folks, I am no fan of the FBI. The FBI has done some horrible things throughout the history of the United States. You know, spying on activists, uh, coming up with plans to plant negative stories about them in the media to shut them up. That’s what they did with Martin Luther King jr, you know, they spy on journalists to this day, they spy on activists to this day. That is wrong. They spy on average American citizens. And we know all of this to be true. And that’s horrible. A massive violation of our privacy and our constitutional rights. But the thing is we still need the FBI. The FBI also does some good things out there, right? Investigating corruption with the mafia and taking those people out, getting them locked up in other massive, uh, criminal enterprises that they’re able to take down. Those are good things, but they’ve also done a ton of bad. But this, the whole implementation of the Russia investigation isn’t one of those bad things that they did. It is good that they did this. It’s good that they investigated the origins of this, but Bill Barr is out there trying to root out any anti Trumpers that may be in his agency. And think about this for a moment. If we stack that FBI in the entire department of justice with people who are only loyal to Donald Trump, what does that do to the rule of law here in the United States? We already know that Trump has broken the law on multiple different occasions. We know that Bill Barr has gone out there after every one of these revelations to run cover for Donald Trump because he doesn’t care about the rule of law. And if he packs that FBI with people who are just like him and just like Donald Trump, those of us who have been critical of this administration from day one could find ourselves in a very unpleasant position.