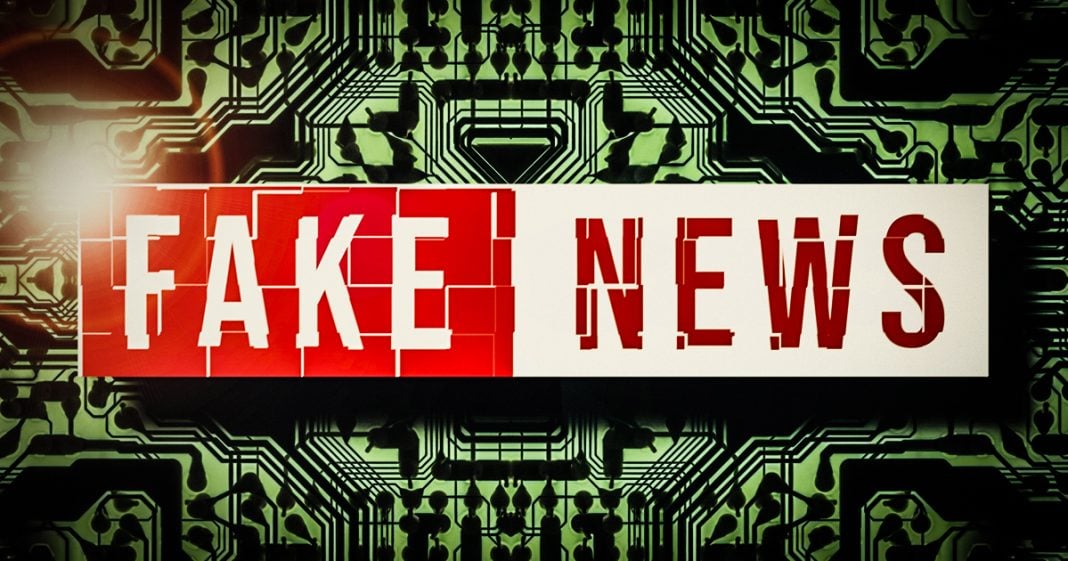 A new report by the Tow Center For Digital Journalism has uncovered a slew of fake news websites that are designed to look like local news outlets in areas around the country. These sites have been found to be spreading false information ahead of the 2020 election, and this is the kind of propaganda that we will have to fight against as we head into the election. Ring of Fire’s Farron Cousins discusses this.

*This transcript was generated by a third-party transcription software company, so please excuse any typos.
According to a shocking new report put together by the tow center for digital journalism at the Columbia university journalism school. There is a group going around right now creating hundreds of fake news websites here in the United States and they’re disguising these fake news websites as local news sites. Some of the sites, for example include East Michigan news, Hickory Sun and Grand Canyon Times and there’s about 186 others that have been identified according to the research, uh, combed through by the, the folks at the center for digital journalism now. They didn’t do all of this themselves. There were plenty of other groups that had been digging into this. The center for digital journalism kind of took it all together as a whole comb through it and put it into this new succinct report, which I, again, everybody needs to read it. Go to the link in the description here. It is a phenomenal and terrifying report, but I’m going to give it to you in a nutshell here. What’s happening is that these fake news producers and they’ve traced it back to a group called metric media. What metric media is doing here is exploiting people’s trust in local news. Consistently for years and years and years. People rate their local news as far more trustworthy than any kind of national news. That’s the one they trust. That’s local, that’s home. These are these people that I know. They’re right down the street and that’s what’s happening with this fake news and what they’re doing. Obviously they’re putting out misinformation, disinformation. They’re putting out press releases from Republican politicians and presenting them as if it’s an actual news story instead of the opinion of one elected Republican, and right now they’ve identified 450 total sites, 189 of which are disguised to look like local news. They’re doing this across 12 different States with a huge concentration down here in the state of Florida because they believe that this misinformation, this fake news could easily swing the 2020 presidential election. That’s why they’re targeting 12 different States. Typically reddish swing States to get people confused cause that’s the goal of fake news, confusion, not just to lie to people, but at the very least to get them to start questioning things. Now according to this report, these websites, which all popped up this year, so they’ve been operating maybe 12 months, have produced tens of thousands of articles just since the start of 2019, tens of thousands of articles. Some of them have no authors. Some of them are just words on a page designed to trick people. Others, as I mentioned include press from Republican politicians and of course to give it that full local news disguise. They also occasionally throw in stories about your local gas prices or you’re a local mortgage prices so that you get the impression that Hey, they really are located in my city. How will they know what the Exxon down the streets charging? It’s cause you can, you can look that up. It’s not hidden. It’s actually pretty easy to do. But people don’t know that. And that’s what’s so depressing about this. We had an opportunity as a country about two years ago to, uh, approve a budget to help students in this country identify fake news, to teach them what to look for. But the Republicans in control of Congress voted it down. They didn’t want to do that. They didn’t want people to understand how to identify fake news. And now look where we’re at. Fake news is now an industry. It’s an industry. And unfortunately we cannot do much about it. You cannot shut this down. The Supreme court has already ruled that yes, the media can legally lie. If you slander somebody, if you’re liable somebody yet you’re, you’re on the hook for that. But otherwise, just giving fake information is not unfortunately illegal because if it were, it would violate our freedom of speech. And you know, then you gotta figure out which side of that line you’re on. But they can lie to us. They can spread this misinformation in. All we can do is sit here and try to combat it. But what we could have done, but again, the Republicans blocked it. And we talked about this two years ago when it happened. We could have had a budget to teach high school students how to identify fake news. So we would have changed a generation. They wouldn’t be the old elderly folks on Facebook sharing all these obviously fake stories from websites nobody’s ever heard of. They would’ve known better. They would’ve been better than we are, but thanks to Republicans, they’re just as vulnerable to fake news as the rest of us.