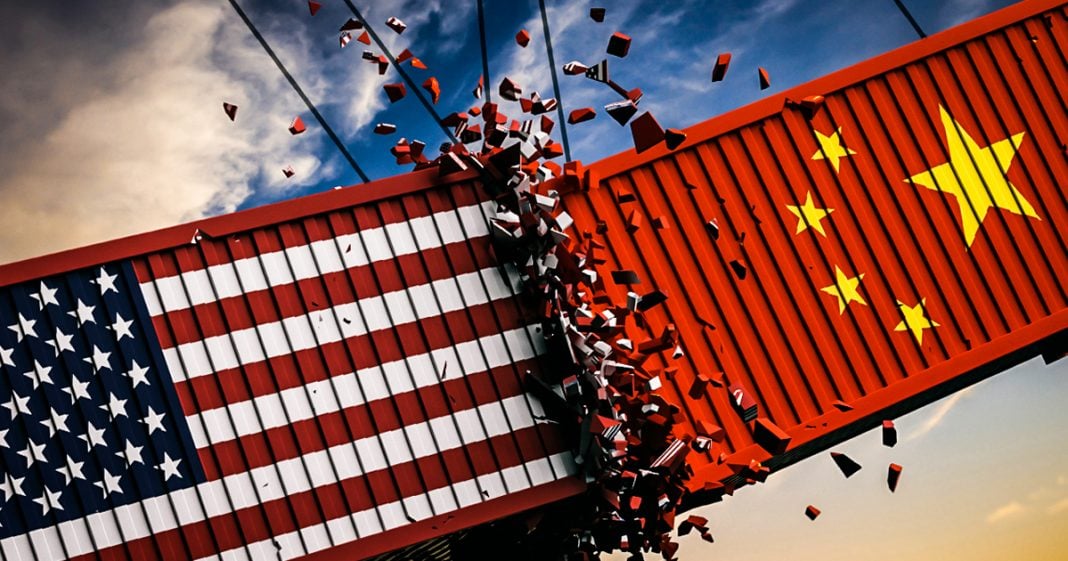 Donald Trump triumphantly proclaimed recently that he had reached a “Phase 1” trade deal with China and he wouldn’t be imposing NEW tariffs that were set to go into effect this week. Other than that, the deal really doesn’t do anything that the two countries hadn’t already “agreed” to start doing. The current tariffs are still in place, and American consumers are paying the price. Ring of Fire’s Farron Cousins explains the deal.

*This transcript was generated by a third-party transcription software company, so please excuse any typos.
At the beginning of this week, Donald Trump announced that he, his negotiators and the country of China had reached an agreement on the trade war, or at least they’d reached part of phase one of an agreement that is going to continue to be rolled out in phases, and what phase one of this agreement includes is that the tariffs Trump wanted to put in place starting on December 15th are not going into place. That’s about it. That’s really about it. Donald Trump doing victory laps all over this country telling us, I am the best negotiator. I am so smart. I am so wonderful and I’m doing this for you. Yeah, all you did was not make it worse for now. And that’s also the other caveat for now, like he’s still has the clearance to go ahead and put those tariffs on whatever the hell he wants to. And he’s probably going to end up doing it. What this phase one deal doesn’t do is remove any of the tariffs that are already in place that American citizens are paying to the tune of $40 billion per year. So we, the American citizens, we’re still getting screwed out of this. The only thing that’s different in addition to the new tariffs not happening yet, is that China agreed to buy some of our agricultural products, does that sound familiar? China? China said, okay, as part of this deal, we’ll, we’ll buy more of your agricultural products. Trump bragged about it on Twitter and I can’t help but think that, Oh yeah. Didn’t they make that same promise in the early summer? They did. They did. As part of those talks in early summer, they agreed to do that and then they didn’t. So Donald Trump bragging about this phase one deal, all the fawning praise over, Oh my God, Donald Trump may be bringing an end to the trade. It’s all nonsense folks. This trade war is not going to end. Trump admitted a week and a half ago that it’s probably not going to be resolved till well after the 2020 presidential election, and there’s been some good analysis as to why that’s going to happen. And one of the best points I’ve seen is the fact that China can’t be seen as bowing down to the United States and the United States, obviously Donald Trump can’t be seen as bowing down to China’s demands. You have two very stubborn groups who always have to be right, and in this instance, neither of you can be right. We have done nothing so far to address the theft of intellectual property happening with China from American products that’s not addressed yet in this phase one deal, maybe that’s phase two, three, four or five as if this is the new MCU. But nonetheless, we have to see this at face value and see it for what it really is. Donald Trump did not score a victory here. The American public did not score a victory here. We got nothing out of this deal. We continued to get screwed, and it’ll be a miracle if China increases any of their purchases of us agricultural products because again, they promised us the same thing six months ago, and those purchases never happened.