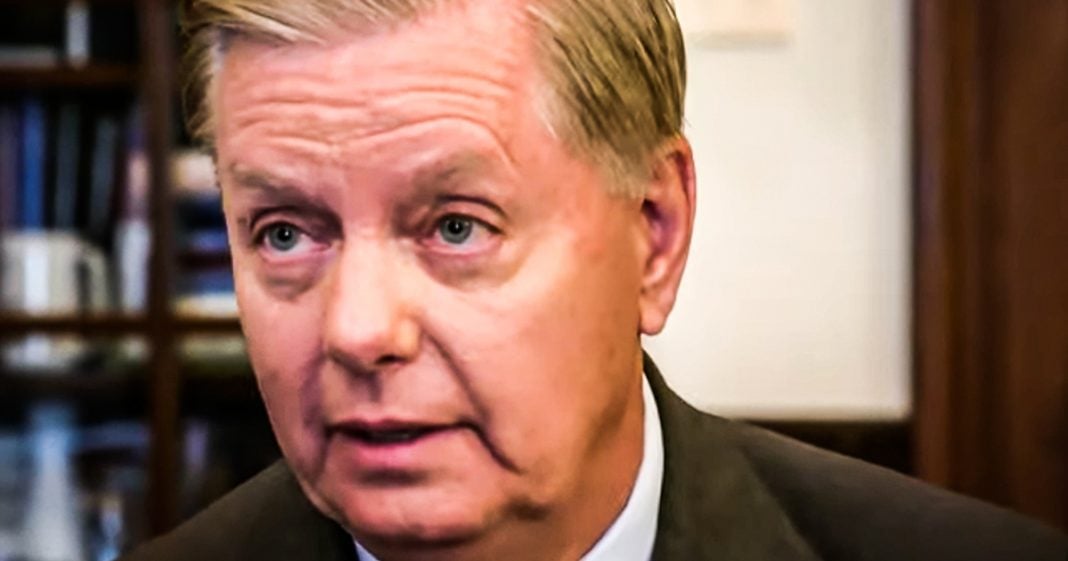 The latest round of polling shows that Lindsey Graham is in danger of losing next year’s election, as he’s now only 2 points ahead of his opponent, with 7% of voters still undecided. If Graham continues on his path of exonerating Trump before the trial even begins, he could find himself without a job in January 2021. Ring of Fire’s Farron Cousins explains what’s happening.

*This transcript was generated by a third-party transcription software company, so please excuse any typos.
The latest round of polling has some really bad news to offer Republican Senator Lindsey Graham, who has held his current seat in the Senate for 16 years and is up for reelection in 2020 but according to the latest poll, Lindsey Graham only has 47% of the likely voters. His democratic challenger, Jamie Harrison has 45% that’s only a two point difference between Lindsey Graham and the Democrat running against him in South Carolina. And to make things better, this poll has a margin of error of 3% which not only means it’s reliable, but also plus or minus 3% for either of those candidates flips the race. That’s the important thing that we need to remember folks. Lindsey Graham right now is in a statistical tie with his democratic opponent. Even though Graham is a 16 coming up on 17 year veteran in the United States Senate representing the state of South Carolina and he’s in a tie. What needs to happen at this point is that Democrats, the DNC, you know, whatever other democratic organizations are out there, start pumping money into South Carolina. We can beat Lindsay Graham. We absolutely can beat Lindsey Graham, but we can’t do it without some national attention on this race. Lindsey Graham out outside, outside of the state of the South Carolina is universally hated, much like Ted Cruz was. That’s why Ted Cruz’s Senate race against Beto O’Rourke was so expensive and why everybody in this country knew who was running against Ted Cruz. Everybody hates Ted Cruz and that’s why they gave so much money to his opponent who almost pulled it off in Texas, Texas, a little bit redder than South Carolina right now, or at the time, not maybe any more, but South Carolina is also shifting. So lots of things are different. There is no such thing as a state that refuses to vote for the other party anymore. We’re seeing that across this country. South Carolina can be the next example, but we can’t get there if Jamie Harrison doesn’t start getting some money from the establishment of the democratic party, and I hate to promote the establishment or tell them, Hey, let’s, we need your help, but we need your help. Everybody can chip in. All of us, a dollar, $5 $10 we can do what we can because this is not just about maybe letting the Democrats take back a majority in the Senate. It’s about sending home forever. One of the worst people to sit in the US Senate in my lifetime. Let’s make this happen folks.