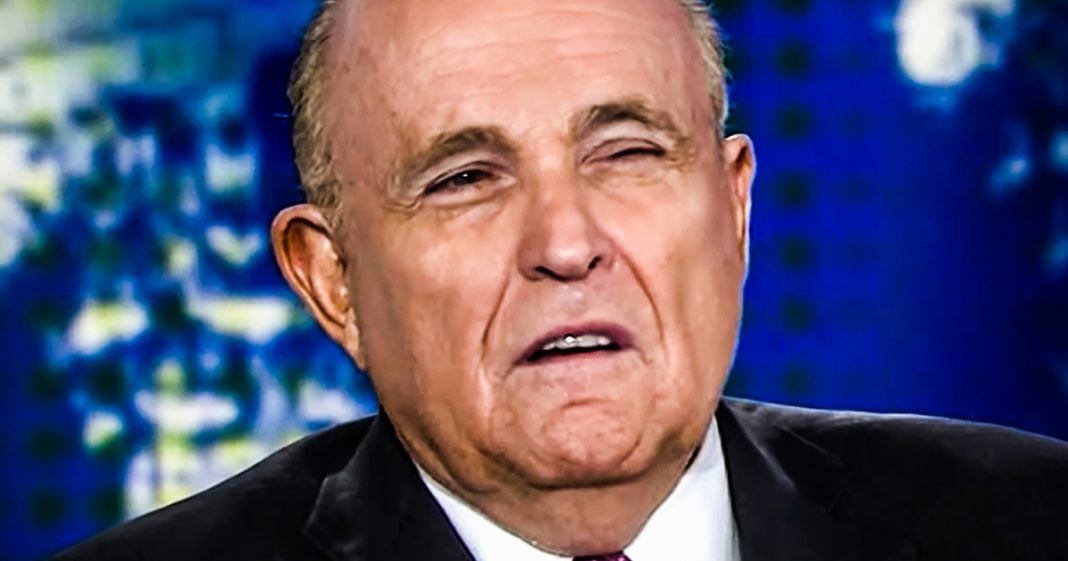 Rudy Giuliani is STILL working on digging up dirt on Joe Biden with Ukraine officials, and he told reporters this week that Donald Trump is fully supporting his efforts. Does this man not know when to keep his mouth shut? His work in Ukraine is what has landed him under criminal investigation and caused his boss’s impeachment. Ring of Fire’s Farron Cousins discusses this.

*This transcript was generated by a third-party transcription software company, so please excuse any typos.
Earlier this week we talked about the fact that Rudy Giuliani went on CNN where he admitted that he was the one who got to Donald Trump and the state department to fire the former Ukraine ambassador Marie Yovanovitch. But in that same interview, Rudy Giuliani once again admitted something else that could likely land him in a lot of legal trouble along with his boss Donald Trump. Giuliani admitted that Donald Trump is fully supportive of the work that he is currently doing in Ukraine, working with current and former officials, most of whom have been disgraced, in order to dig up dirt on Joe Biden and bring it back to Donald Trump. Here is what that admission means. It means that Donald Trump knows what Rudy Giuliani is doing over there, and Donald Trump knows that Giuliani is doing this for Trump, so that would make this as Giuliani is not being employed by the president, at least not paid. He is his personal lawyer, but he’s not receiving a paycheck. So this would be considered an in kind campaign contribution to the Donald Trump campaign. That is illegal and Rudy Giuliani can be legally punished for this, but more importantly, Rudy Giuliani with his trip to the Ukraine that Donald Trump described as being done out of love, is also acting as an unregistered foreign agent. That’s what Rudy Giuliani is, and remarkably enough, obviously the Southern district of New York is investigating whether Rudy Giuliani is in fact operating as an unregistered foreign agent, a move that could land him in jail or at the very least disbarred for the rest of his life. Trump knows what Giuliani is doing over there, and I am willing to bet that Donald Trump is the one who sent him over there. Rudy Giuliani could be back over here in the United States doing whatever the heck he wants. He could be traveling the globe doing absolutely nothing but enjoying retirement. He’s got the money. He could be doing that, but he’s not. He decided to take it upon himself to go over to Ukraine and dig up dirt on Joe Biden. I simply don’t believe it because it doesn’t make any sense. He’s doing this because the president wants him to, and that’s why I’m so angry about the Democrats rushing this impeachment vote. You should have had Giuliani testify, you should have waited for more information like Giuliani’s bombshell interview on CNN that come out before you drafted your articles. Cause remember they drafted their articles of impeachment prior to this Giuliani interview coming out where he admitted the two different crimes and admitted that the president know about it. I think the Democrats blew their shot on this. They absolutely did. Not saying that anything would have changed what’s going to happen in the Senate, but you had to add more. You had to add more. And Giuliani is the gift that keeps on giving because every time that guy gets in front of a camera, every time he gets on Twitter, he’s admitting to more crimes. Hell, he committed them just last week in Ukraine. He can’t stop himself. And yeah, he’s going to be held accountable because the Southern district of New York is investigating him and he’s not going to get away with it, but his boss likely is. And part of the reason is because the Democrats just went too dang fast on this impeachment.