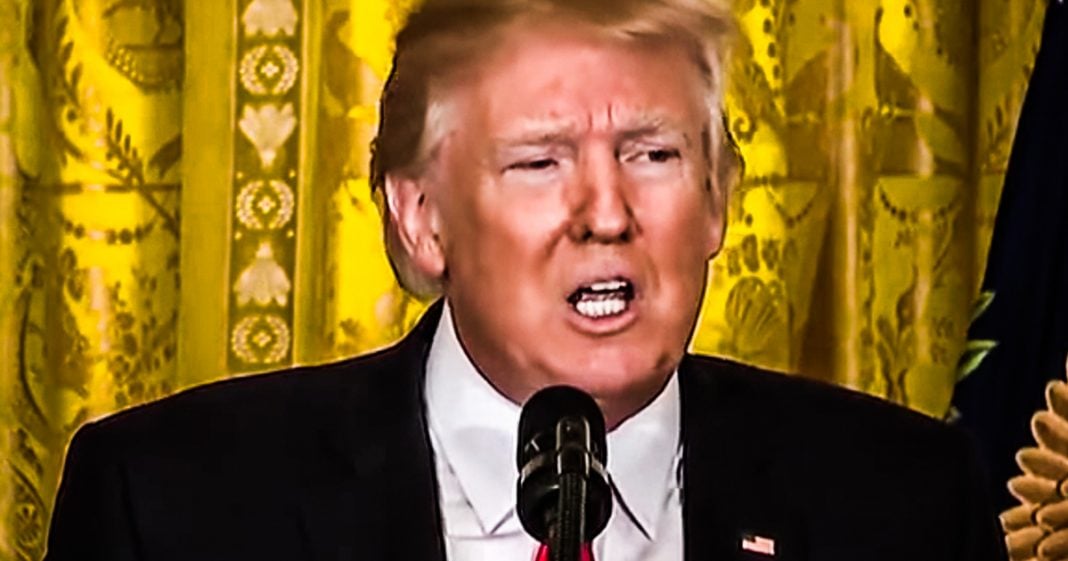 The latest Fox News poll has some really bad news for Donald Trump, as 54% of respondents say that the President should be impeached AND removed from office. If the President is losing the Fox News crowd, his chances for reelection are growing slimmer and slimmer, which may explain why he’s lashing out so much at the network. Ring of Fire’s Farron Cousins discusses this.

*This transcript was generated by a third-party transcription software company, so please excuse any typos.
Donald Trump has been very angry with Fox news over the past few months and last weekend he lashed out at the network for airing interviews with Adam Schiff and James Comey. He said, Oh God, only pro Trump things on your network do well. And at the same time he was complaining about these interviews with Comey and Schiff. Another news story came out from Fox news that actually gives us a better explanation of why Donald Trump was furious with the network. And that news was that according to the latest Fox news poll, 54% of people who responded said they want Donald Trump impeached and removed from office in additional 4% said he should be impeached but not removed from office while only 41% said he should not be impeached or removed. So there is a 13 point gap in this Fox news poll between the people who say you should be impeached and kicked out of office. And the people who say no, nothing should happen to them. That is huge. That is a very large gap that continues to get wider. So this tells us several things. First and foremost, it tells us that these Republican talking points that the president did nothing wrong. Trump out there tweeting literally every day that it was the perfect phone call. We loved it. We both hung up at the same time. That’s so perfect. Who cares how perfect it was. The public ain’t buying it, and they shouldn’t because it wasn’t a perfect call. Based on the summary transcript that we have all seen, because let’s not forget, this jackass still hasn’t released the actual transcript of the call. And there’s a reason why he’s withholding that because it’s going to show us that he is guilty as hell, so his talking points aren’t resonating with the American public. The shit show put on by Republicans in the house isn’t resonating with the public. The talking points put out by Fox news is not resonating with their own audience. That’s bad news for the president. Unfortunately, we have 11 months, little under 11 months till the 2020 presidential election, so these polls could change and impeachment will be long gone by then. Republicans in the Senate will have exonerated Donald Trump by then. And I imagine that a lot of people in this country will think that that means that the president did nothing wrong. That’s not what it means. What it means is that he’s terrified enough Republicans in the Senate to make them bow down to him and not vote to impeach and convict, even though they would have a much better life if they had Mike Pence as their president than Donald Trump. And I wish Republicans understood that. And I’m not only saying that because Mike Pence would be the easiest Republican to beat in a general election, but also because Mike Pence, much like those Republicans in the Senate, it’s just a good old fashioned lapdog Republican willing to do whatever wealthy billionaires want them to do without putting too much of a stink up like Donald Trump has. But nonetheless, the numbers now are bad. They’ll probably get better for him as time goes on. But Hey, the holidays are coming up. Let’s take a moment and enjoy the fact that most people in this country right now want Donald Trump kicked out of office.