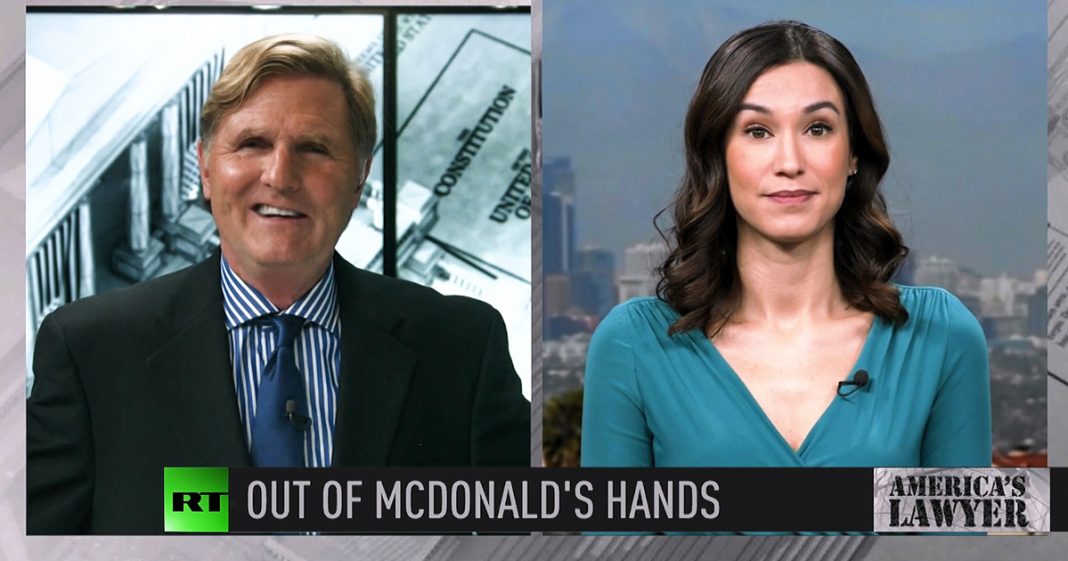 Via America’s Lawyer: RT correspondent Brigida Santos joins Mike Papantonio to explain how a federal ruling has exempted McDonald’s from being held responsible for how its thousands of franchisees treat their employees.

Mike Papantonio:             A federal agency has ruled that McDonald’s is not responsible for how its franchises treat workers, even if they violate the labor laws. RT’s Brigida Santos joins me now from Los Angeles with the story. Brigida, which federal agencies issued this ruling and how’s it going to impact McDonald’s workers? How, how bad is the ruling, not just for McDonald’s, but for all types of kind of service workers that are, that are in the same situation?

Brigida Santos:                   This is really bad. The national labor relations board, which is in charge of enforcing American labor laws, has ruled against workers who have accused McDonald’s franchisees of retaliating against them for trying to unionize. The fast food workers union alleges that workers who participated in strikes in favor of increasing the minimum wage were punished with reduced hours and harder assignments. Now, as part of the lawsuit, the workers were seeking to classify McDonald’s as a joint employer with franchise operators so that the company could be held liable when franchisees violate labor laws.

But the federal agency has now said that the case may not be able to determine whether McDonald’s should be considered a joint employer, which is insane. Now in response to the ruling, the fight for $15 group and union says that McDonald’s is walking away with a get out of jail free card after illegally retaliating against workers who are fighting for the right to earn enough money to feed their families.

Mike Papantonio:             Well, of course the national labor board whoever is the president is never in favor of the workers. I mean the, the industry was the, the the US chamber of commerce and associated industry and organizations like ALEC’s understood that if you control what happens to labor through the national labor board, then you kind of have control over the whole program. What we’re going to see happen next isn’t it, is we’re going to have everybody look at this ruling and say, wow, this is a great way to do business. Everybody’s just going to be a, we’re just going to have them on a contract and they’re not going to really be an employee. How will this outcome of case, how’s it going to affect other companies that rely heavily on franchises? What is your prediction? Mine is that it’s all bad for people in the service industry.

Brigida Santos:                   Same prediction here as well. Now this sets a precedent for other companies to distance themselves from the misconduct of franchisees. For those who don’t know, a franchise is just an arrangement in which one party, a franchisor like McDonald’s, grants a franchisee, a restaurant owner, the right to use its name and business processes to produce and market goods following certain guidelines. Now, under this type of arrangement, customers get services on demand and franchisors like McDonald’s generate brand recognition and billions of dollars in money using other people’s resources. This is problematic because more than 90% of McDonald’s locations internationally are owned and operated by franchisees.

This ruling shields McDonald’s from responsibility when those franchisees mistreat workers or fail to protect them from violence as another lawsuit alleges. Now to give you an example of the things that some of these workers go through, in Chicago, there are reportedly at least 20 emergency service calls from McDonald’s restaurants every single day and then nationwide, there’s at least a news report of violence from McDonald’s every 36 hours. And mind you, those are just the ones that get reported. Many incidents go unreported.

Mike Papantonio:             Okay. Okay, so let’s make this clear just so the viewers can really understand how draconian this is. Here, you have people that started out, they said, look, we just want the right to be paid minimum wage of $15 an hour. Those people who were up front, the activists were targeted. They lost their jobs, they made the jobs impossible to keep. They simply beat that employee up one way or another in the way they treated them. But it goes beyond that. Here you’re talking about a situation where employees are feeling unsafe, where they’re being actually threatened by customers with physical violence and according to this ruling, well, the franchisee, they don’t have any responsibility to keep that person safe.

They don’t have any responsibility to have standards and best, best work practices for that employee. And this can be, this can be expanded to almost any setting if you follow the logic of this, of this board ruling, which is predictable. I mean, it was very predictable once we saw who was appointed to the board by Trump, we actually knew how they were going to rule on cases like this. It’s never for the workers in America anymore, is it?

Brigida Santos:                   No, it’s absolutely not. And it’s really hard to keep these people safe. If it’s up to franchisees to protect their workers and follow labor laws, you know, the only thing that workers can really do is to report abuse, misconduct or violence to the labor Bureau or file police reports when necessary. You know, they could also find another job, but that’s a lot easier said than done for many people. So this is a terrible ruling for workers.

Mike Papantonio:             Yeah. Just to give you an idea of how crazy this is, they’re actually cases where customers are jumping over the counter and attacking the employee who says, oh gee, I’m sorry we’re out of French fries. That’s how cuckoo the American public has begun become. And for a franchisee not to, at the very least, protect that worker when they know exactly how to do it. There’s all kinds of ways to protect the worker and say, well, it’s not our problem. The way the law’s written, we don’t have any responsibility. That’s McDonald’s, drive past McDonald’s. Drive past McDonald’s. Don’t do business with them. They were the ones that were really the big fighters in this.

They put together the, the, the, the US chamber of commerce to get behind them, associated industries to get behind them. All of the, kind of the dark money in this country jumped behind this. Look, Brigida, thank you for, thank you for joining me. My prediction is we’re going to see a lot more aweful things happening in the service industry in this country, because of this ruling.