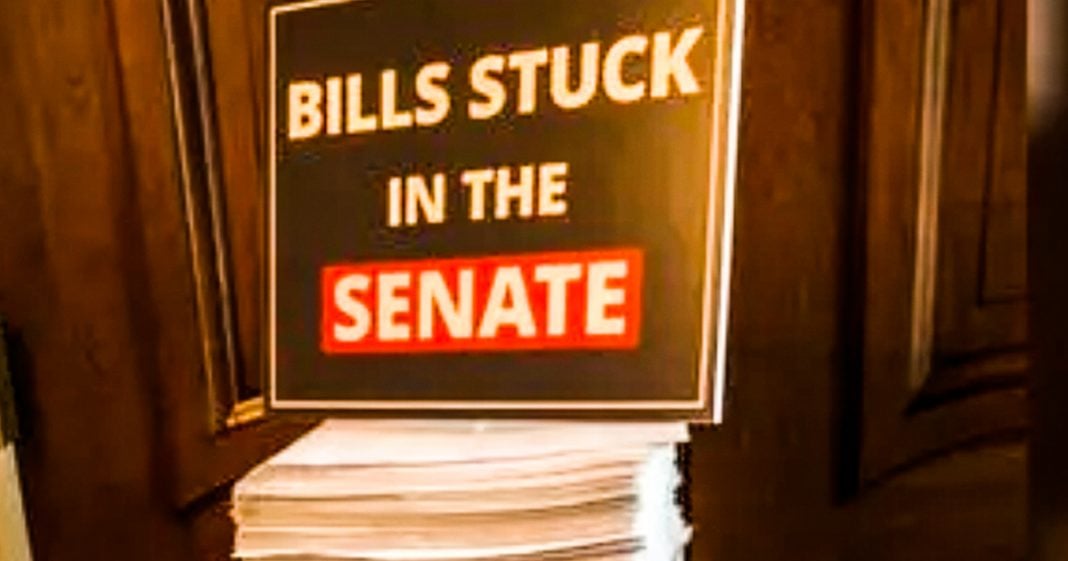 There are currently close to 300 bills that have passed the House of Representatives sitting on Senate Majority Leader Mitch McConnell’s desk that he refuses to bring up for debate. Democrats in the Senate have had enough, and they began tweeting out pictures of the stack of bills this week in an effort to both shame McConnell and fight back against the “Do Nothing Democrat” label Republicans have created. Ring of Fire’s Farron Cousins discusses this strategy.

*This transcript was generated by a third-party transcription software company, so please excuse any typos.
For many, many weeks now, Republicans have been trying to paint the Democrats as the quote do nothing Democrats. Donald Trump has been spearheading this campaign and the whole point of it is to say that Democrats are so obsessed with impeachment that they haven’t done a damn thing in the US house of representatives other than attack Donald Trump since they retook the majority earlier this year. Well, Democrats in the Senate finally decided, enough is enough. We’re going to show the people what is actually happening. So this week they made a mock up of a giant stack of bills, roughly 300 of them, and that mock up represents the roughly 300 bills passed by the house of representatives sent over to the Senate where they have all died on Mitch McConnell’s desk. These pictures went viral. Democrats came out and they even did a little press conference next to the stack of bills because they’re tired of the do nothing label. They’re tired of the lies of the Republicans, but more importantly, they’re actually tired of the fact that nothing is getting done. But it’s 100% because of Mitch McConnell. They were also quick to point out that out of those 300 bills, 90% of them were bipartisan. So it’s not like we’re talking about a bunch of bills that are just progressive fantasy land. These are real actual things that both sides finally came together on and said, you know what? We should probably do this. Things like raising the minimum wage that’s been sitting on McConnell’s desk since July, expanded background checks, been sitting on McConnell’s desk for just as long. Other things include taking action on climate change, doing something about domestic violence. And of course, the one that was most recently put on there, lowering the cost of prescription drugs here in the United States. Most of these bipartisan bills, we also do have a couple, uh, you know, healthcare bills to expand healthcare. Those were more progressive, ensure McConnell’s not gonna vote on that. He should, it would help millions of people, but McConnell’s not interested in that, but he’s not even interested in passing the things that are bipartisan people bills that people in his party said, yeah, this is actually good. We need this. And it’s all part of McConnell strategy that Democrats are now exposing. McConnell has to do nothing because if he passes the bills, then Oh my God. Then suddenly the little Trump narrative of the do nothing Democrats explodes because bills are getting passed, things are getting done and it showed the Democrats could work on both impeachment and legislation. So Mitch McConnell is stuck between a rock and a hard place. He can either continue to take this abuse and be exposed for the fraud that he is or he can start passing the bills and draw the ire of Donald Donald Trump, not an enviable position for Mitch McConnell. Certainly not considering the fact that he isn’t a very race right now for his reelection and there’s really not much he can do and that’s why I love this strategy from the Democrats and I liked that they’re doing this. I think this is the correct path. Point out that Mitch McConnell is lazy. The only thing he cares about in the Senate is passing Donald Trump’s judicial nominees and it’s because McConnell has a role in handpicking them with the Federalist society. That’s what’s happening. But if he were to pass any real legislation, then suddenly that blows up months and months of Republican talking points and shows the public that the Democrats are far more competent than the GOP.