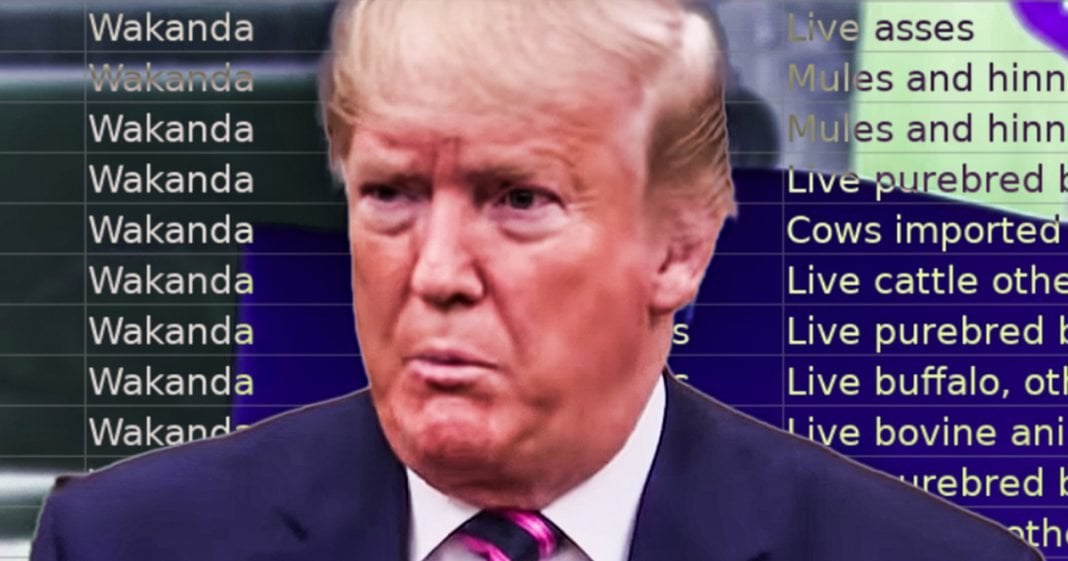 The Trump administration was busted earlier this week for having the fictional Marvel Comics country of Wakanda listed on the Department of Agriculture’s website as a free trade partner with the United States. The country, home of Black Panther, even included itemized lists of prices for goods coming and going through Wakanda, showing that this was far more than just a quick accident. Ring of Fire’s Farron Cousins discusses this.

*This transcript was generated by a third-party transcription software company, so please excuse any typos.
In a stunning show of incompetence. The Trump administration earlier this week was forced to take down one of our free trade partners listed on the United States department of agriculture’s website and that unlucky trade partner that is apparently no longer a trade partner of the United States happens to be Wakanda. For those not familiar with Marvel comics, comics Wakanda is the fictional country that Black Panther is the King of. To put it another way, it’s not real, but the Trump administration had it listed on the USDA website as one of the United States trade partners. Now, it wasn’t just sitting there in a little list. Oh no, no, no. It had a complete dropdown box where you could go through and actually see how much goods were being traded back and forth from Wakanda to the United States. We had prices set for these goods coming and going from a fictional country. Here’s what happened. This is, according to NBC news report, there were hundreds of data inputs for Wakanda, different commodity groups offered on dropdown menus range from fresh vegetables and unroasted coffee beans to essential oils in livestock. Yellow potatoes had to maintain a 5 cent per kilogram base rate when shipped in from the fictional East African nation while frozen Chinese water chestnuts were tariff free. If the US decided to import them from Wakanda, Cows were also tariff free. They removed this information, I believe Wednesday they took Wakanda off, so I guess you know now we’re in a trade war with a fictional Marvel country, but the Trump administration offered this explanation over the past few weeks. The foreign agricultural service staff who maintain the tariff tracker had been using test files to ensure that the system is running properly. The Wakanda information should have been removed after testing and is now been taken down, except here’s the thing, it hasn’t just been up there for a couple of weeks as the administration claims, it’s been up there since June. Wakanda has been listed as a free trade partner for the United States since June. Now the administration says just a couple of weeks, we’ve just been doing this to kind of test things out, making sure everything’s right. Okay. That’s understandable. Like that, that is typically how you would do that with a website. You put up these fake posts, you try to put the data points on it. It’s not anything anybody supposed to see. Typically you leave it on the back end or put it on a dummy page that can’t be accessed and then you remove it. I mean that’s what any competent web developer would do. You immediately remove it. Once you’ve done the test and you see that everything’s fine. They didn’t do that. Furthermore, as I just said, this wasn’t just a couple of weeks that it was on there. This was since June, and part of the reason is likely because the US doesn’t have a whole hell of a lot of free trade partners anymore thanks to Donald Trump. He’s taxing the hell out of everybody, pissing everybody off, screwing over American consumers, and I think this was put there because they needed a win. They needed to have more countries on that list because the list is so short, only about 20 countries on that list including Wakanda. So now we’re down to in the teens, I guess for countries that we can freely trade with, but if there is any consolation here, it’s the fact that this administration is so stunningly incompetent, so astonishingly corrupt, that they couldn’t even get their lie straight about why their website listed the country of Wakanda as our trading partner. That’s the real story. The incompetence, because we see it at every turn with this administration, it doesn’t matter what they do. Incompetence is the one common thread that this Trump administration has had since day one. It has touched everything. Incompetence has woven its way through every part of this administration. Touching on every single member of Donald Trump’s cabinet and the USDA apparently is no exception.